Akram Aylisli’s Novel and Us 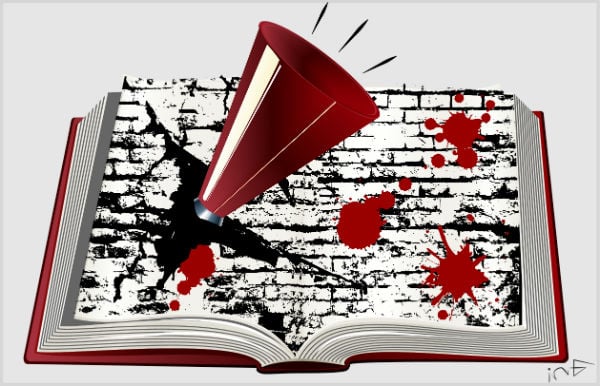 Pre- and post-election developments in Armenia deafened us with their turmoil and shoved aside from the spotlight a significant event that Armenian news outlets covered and reacted to only in passing.

Azerbaijani writer Akram Aylisli’s novel Stone Dreams, translated into Russian and published in Moscow, resulted in the author being “stoned” from left and right in his country and his life being threatened. Aylisli found himself in approximately the same situation as Orhan Pamuk was in Turkey after his novel was published. And again, “because of” Armenians.

Will the second non-Armenian writer receive the Nobel Prize “due to” Armenians? Most likely, if Aylisli is likewise expelled from his country, but what’s significant for me is not that but our response to the Azerbaijani writer and his novel.

It’s commendable that Armenians immediately began to translate the novel, and it’s already being published by our news outlets.

Due to these published reports, I’ve already read a dozen excerpts, and I’ve pleasantly understood that the book’s author is not a regular writer but a truly talented writer. In this sense too, the comparison with Pamuk is quite appropriate.

However, my main point refers not so much to Aylisli’s novel and its artistic values as to our handling of Aylisli and his novel.

After the reproach of Azerbaijanis, Armenians naturally rushed to extol and make a hero out of Aylisli, which was normal because Stone Dreams is truly a creative deed. But our news outlets’ and journalists’ response is still perfunctory, and we hope a serious and detailed literary analysis and assessment of the novel won’t be late in coming.

Assessments thus far (this one included) are rushed and declarative — and moreover, quite questionable. A few of these appraisers have already rushed to announce that Aylisli with his novel has saved the Azerbaijani people from shame. As for how and with what he’s saved them is quite incomprehensible.

I am quite of the opposite opinion, which is that Aylisli, revealing and showing a certain piece of truth and reality, has finally revealed the real face of Azerbaijanis.

Being quite removed from architecture and archaeology issues, I can confidently say the truth regarding the destroyed Armenian monuments in Nakhchivan is more influential when heard by an Azerbaijani who witnessed it — moreover, an Azerbaijani writer who was born and lived in that area — just as the remarks of a Turkish writer (Orhan Pamuk) writing about the Armenian Genocide became quite convincing and heard all over the world.

Due to Aylisli’s novel, willingly or unwillingly, opinions in Armenian news media were raised on whether any Armenian writer could’ve written such an objective and unbiased novel during this period of the Armenian-Azerbaijani conflict.

Let me try to answer the question my way, in my name, and as I see it. In some sense I’m also obliged to answer it — as an Armenian writer myself.

In short, for around 25 years I lived side-by-side with Azerbaijanis and though I wrote stories and a novel during my teenage years, I have never written about the Azerbaijanis living under my own nose. Krivoi and the area adjacent to the Republic stadium especially in the 60s and 70s was known for its local criminals, fights, and so on.

In other words, it wasn’t a peaceful area, but living in that area for about a quarter of a century, I don’t remember an incident of local Armenian residents giving local Azerbaijani residents (who were much fewer in number) a hard time. Of course, the opposite also couldn’t be true because the Armenians owned the field and the situation. I’ve also never heard of Armenians in Yerevan desecrating any Azerbaijani person’s grave.

And if we consider the mosque on Narimanov Street a monument of Azerbaijani culture, then I can assure you that no Armenian laid even a finger on that monument. Moreover, I remember quite well that the scrawling on its walls were words in Azerbaijani or the names of Azerbaijanis.

In short, if I were to write a novel about the Armenians and Azerbaijanis living in that area during that time, it is we [Armenians] who undoubtedly would’ve gained from that. Just as is the case with Aylisli’s novel.