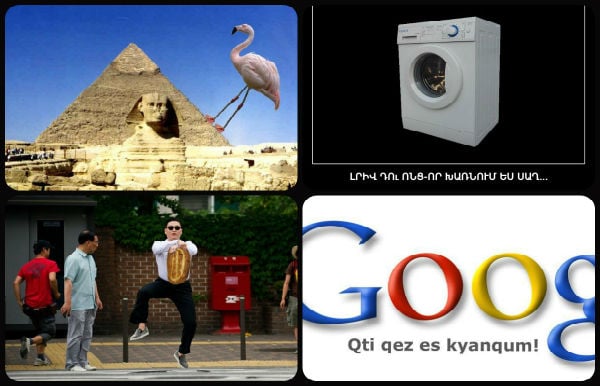 We in Armenia are finally getting the understanding of memes. The same can be said for internet memes.

We, like the rest of the world, lived among memes, but we didn’t know it, just as Molière’s M. Jourdain, who one day discovers that he has been speaking prose all his life without knowing it.

Actually, the first Armenian internet memes were developing when the topic of the day was Armenian-Azerbaijani relations, and they were predominantly in Russian.

To get acquainted with Armenian memes from 2003–2008, you can read the section on the Miacum forum (archived and still available, though only in Russian), which was developed completely in that discourse.

During that period, the creation, dissemination, and use of memes was possible since the Armenian online community was quite small and constantly having the same discussions — the connection among users was stronger than it is today.

However, in recent years, the Armenian online community has drastically changed. The influence of the Diaspora mainly living in post-Soviet states decreased, while, on the other hand, that of the Armenian- and English-speaking Diaspora from the West increased. Contact with Azerbaijanis (which was meaningful and void of any insults) nearly disappeared; the main language of communication became Armenian; and the number of users sharply increased, while the connection among them weakened.

The real online enthusiasts, however, began to collect memes on the Armenian wiki site Chtesutyun (only in Armenian). In Armenian internet’s recent history, probably the first great and widespread meme was that of “astronaut” and “astrophysicist” Artur Poghosyan.

But the creation of memes really gathered momentum in 2012. There were several reasons for this:

As a result, in the last few months we witnessed the torrent of memes, beginning from the meaningless and incomprehensible for many “matnakash” (a type of everyday Armenian bread) to “Ya Garegin Nzhdeh” (a reference to the well-known expression used in the trailer of the newly released film Garegin Nzhdeh), which caused strong adverse reactions. During the presidential election campaign period some candidates have already become the target of memes, with one candidate even welcoming the meme-ification surrounding him (video in Armenian only).

Today, there are an average of 2–3 new Armenian memes a week, which not only are widely disseminated online, but also often impact online news media. And so, it can be said that Armenia has entered the era of internet memes.