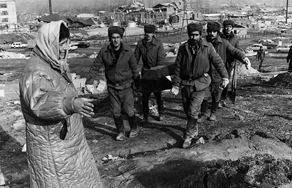 From the first few seconds of the earthquake to the last person rescued from the rubble there were numerous cases of heroism, some of which appeared in the press. Of the heros featured in the media the first were teachers. “Spitak region’s Gogaran school teacher Satenik Poghosyan threw her 7 pupils out of the window, while she remained under the rubble, with her two daughters” (“The Armenians Have Lived, Live, and Will Live,” Lyudvig Karapetyan, Soviet school, Dec. 15, 1988). The young teacher of Leninakan’s No. 16 school saved the children by shouting “Quickly, get lost!” The children, who’d never heard her speak so rudely, got out of the building. From the entire school only this third grade class was saved. Unfortunately, no room could be found in this entire lengthy article for this teacher’s first and last name (“Five Hours in the Children’s Fund,” V. Dolganov, Avant-garde, Dec. 18, 1988).

We come across another nameless hero’s terrifying story in an article titled “‘Georgian’ Means Brother”: a father gets his five-year child to the doctors,having lost one leg, which he himself cut with an ax so that he could get out of the rubble and save his child (“Mikhail Jinjikhashvili, Tamaz Lomsadze, Zarya Vostoka‘s “Mobile Editorial Office”, Dec. 14, 1988). Acting like a true hero under the rubble was “a student of the sixth grade of Gugark region’s Lernapat village, Avag Gasparyan: in the ruins of the school building, lying under a huge concrete slab, upon the requests of his classmates who were alive like him but suffering from terrible pain, he didn’t move his leg… since by pulling [his leg] back, the slab pressed down on the others more” [“On the Earthquake Floor: Report from the Hospital,” V. Voskanyan, Khorhrdayin Hayastan (“Soviet Armenia”), Dec. 16, 1988].

Leninakan’s Banvor (“Worker”) newspaper, republished 10 days after the quake, describes another case of self-sacrifice. “Vardan Asloyan… having forgetton his home (his wife works at a tool-making plant) was in the Spandaryan street residential area. The second half of the day was beginning when he came to, remembered his wife, and his kindergarten-aged children.” Fortunately, he finds his wife and children alive and returns after half an hour to the same place where he was helping in the rescue work (“We Can Do More,” S. Ghumashyan, politburo secretary of the head plant of the cotton manufacturing union, Dec. 16, 1988).

Many were the acts of soldiers, who in the general chaos and confusion provided huge assistance to the victims. An article published in Sovetskaya Rossiya titled “The Hero’s Name is Army” (Stanislav Kosterin, Dec. 16, 1988) describes 28-year-old Leninakan resident Susanna’s five-day “Golgotha” (calvary). Soldiers dug a tunnel to her, where they were able to feed her and provide painkillers. Finally, they had to amputate the young woman’s leg in order to rescue her. Her two children, whom she had been holding in her arms beneath the rubble, died.

Komsomolskaya Pravda tells the story of border guard Valeriy Varenitsa, who saved several lives, but in the end three meters prevented him from being able to get himself out of the collapsing building (“Three Meters to Life,” Dec. 20, 1988). The same paper in an article titled “Helping Chernobyl” (published on Dec. 16, 1988) describes the trauma of 27-year-old lieutenant of Kiev’s graduate police school Dmitry Samiylik, who “was saved in Spitak, but his hair went grey in 6 days.” Partly destroyed buildings collapsed on him twice while he was rescuing people. On a five-year-old boy’s request, Dmitry removed the boy’s mother from the rubble, who died in the senior lieutenant’s arms. Dmitry nearly fainted. “The doctors insisted that he go to his parents’ home in Zhytomyr [Ukraine], to get his bearings after what he went through.”

Regardless of how little heroism was linked to the image of a Soviet police officer, also displaying amazing devotion was Sergeant Artashes Aleksanyan of Yerevan’s Spandaryan region police, who on Dec. 7, 1988, donated 400g of blood in the capital, then went to Spitak, saved several children, and remained for two months, up to the the publication of the article devoted to him. Aleksanyan even saved 17,000 rubles belonging to one woman who deceived him, saying her son was under the rubble. The son, in fact, was in Yerevan at the time, studying at a local university (“One of Many, Let’s Put It This Way,” Vahram Martirosyan, Grakan Tert, Feb. 10, 1989).

Witness to the Mexico City earthquake and Consumer Health Services CEO James A. D’Orta probably wasn’t mistaken in saying that “I’ve seen true superheros [in Armenia]… Those people are worthy of being film heros” (“In the Crack of Rescue,” N. Dombkowski, special correspondent, Sovetskaya Rossiya, Dec. 16, 1988).

Also deserving special mention is an incident of mass decency that I likewise would qualify as heroism. The Dec. 27, 1988 issue of Izvestiya reported that the wall of a Leninakan prison cell collapsed but no prisoners escaped. During the days of the earthquake, the governing authorities were humane toward prisoners: “286 convicted have been released to attend the burials of their relatives” (“Released from Prison… For One Week,” A. Ilesh). At the time the article was published, the vast majority of them had already returned to the places where they were serving their sentence, and prisoner L. Martirosyan even returned 38,000 rubles he found (a respectable sum of money at that time — the cost of 4 Zhiguli vehicles or one person’s salary over 20 years). Not much later, the Armenian SSR Supreme Court released him from prison for this deed.

The true heros were doctors. Izvestiya correspondent Sergey Bablumyan in his report describes doctors who were rescued from a scathe-less part of a collapsed hospital building and immediately began performing operations, forgetting their families. General-Major N. D. Tarakanov recalls anesthesiologist A. Barishev, who “had misfortune also on the surgical table: he was told that a trestle crushed [his daughter] Olechka. One hour later he returned with his daughter in his arms, placed her on the ground, in the regular queue. The girl didn’t make it till the operation — she died from kidney failure (Spitak’s Memorial: 1988–2008, p. 157).

Also heros were pilots, who, having “corridors” of vision, landed in overladen airports. General-Major Lipuntsov in his memoirs writes that there were a dozen airplanes in the air at once. Armenian dispatchers didn’t have the relevant experience, landing strips were calculated for 4 airplanes, but “pilots succeeded in huddling up to 15 IL-76 [airplanes] on the platform, steering arm to arm, doing, it seems, sometimes the impossible” (Spitak’s Memorial: 1988–2008, p. 194).

Heros were the thousands of students and other volunteers who went to the disaster zone to carry out rescue work, without having warm clothes to wear — also those standing in line in Armenia and all over the Soviet Union to give blood.

Carrying out heroic work were organizers and providers of assistance — not only in the USSR, but all over the world.