Journalism and the Social System 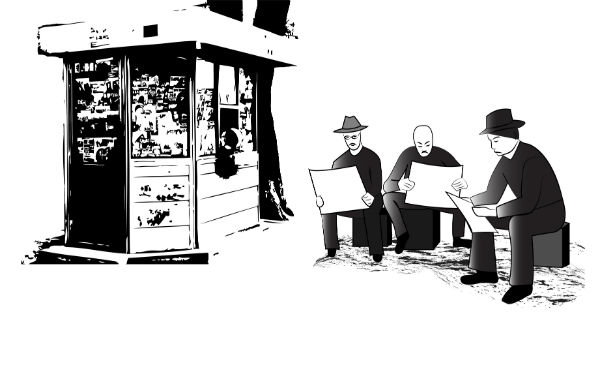 Even print and online news readers criticize journalists. They criticize them, but continue to read their publications.

Opposition journalists are criticized for being opposition; pro-government journalists, for the exact opposite.

When journalists accuse the governing authorities for the lack of democracy and in holding unjust elections, the pro-government lay on the justifications, saying we’re still a young state, and perfect democracy is acquired over long and hard years.

Perhaps they’re right, but those expressing such views are obliged also to believe that it’s not possible to establish a free press and free journalism in one day, especially since to establish them journalism unions and those responsible for Armenian journalism today didn’t begin their mission on fertile ground.

In short, everyone requires perfection from everyone else, and no one wants to get into anyone else’s situation — and especially not into the situation of journalists. And they don’t even try.

They don’t try to consider and understand that news outlets that immediately emerged and sprouted like mushrooms after Armenia’s independence emerged on the basis of Soviet Armenian journalism; or rather, under the conditions of its absence, because there was no such thing as a normal Soviet Armenian press. Moreover, there were no normal journalists ensuring normal journalism and news.

And it’s no coincidence that they considered themselves more so writers than journalists, and the press and readers expected from journalists not pure and clear information but only morality, and in the best case, nationalism, and the aforementioned authors and authoritative figures satisfied this requirement of editors and readers the best.

And though the journalists’ union those years had a lot of members, there weren’t any real journalists because there was no demand for real journalism in not only Soviet Armenia, but also the entire Soviet Union. There particularly and especially was no accurate and urgent journalism.

And it was not at all accidental that citizens of the Soviet Union were the last to hear about the Chernobyl disaster, and it likewise wasn’t accidental that those Soviet Union citizens who wanted and needed to be informed got the news of interest to them mainly from the radio stations of the Voice of America and RFE/RL’s Armenian service (Azatutyun).

And if we consider that the journalism of independent Armenia had its start from such a point zero situation, we are obliged also to acknowledge with understanding that journalism having such imperfect traditions in this brief historical period couldn’t have even reached perfection, especially since regular and exacting readers of the modern Armenian press are not particularly solvent.

And to those who might be surprised by this fact let me say, the weakness of an independent and sovereign print press is first and foremost the insolvency of its readers. I know people who if they don’t read the daily papers their day isn’t complete, but unfortunately, these dedicated readers are not in a position to purchase and read all the daily papers, and so each basically buys one paper and passes it on to his friends who, in turn, pass on their papers to him.

And my remarks don’t at all mean that us journalists are morally flawless and perfect (and this couldn’t be so), and if some journalists continuously assume a position that they are morally perfect especially over others, they only cause laughter, because it’s impossible even to think that in a lacking and imperfect social system there might exist a perfect domain, taken separately.

Journalists too, like others, are the result (or perhaps the victims) of the given social system and structure.