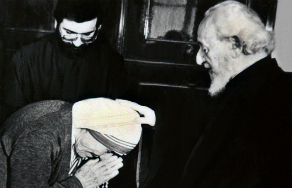 Not much time having passed since the earthquake struck, the press begins to raise questions:

WHY did so many buildings collapse? In the newspaper Turkmenskaya Iskra (“Something to Think About,” Dec. 17, 1988), writer Seyntniyaz Atayev condemns the principle of Soviet construction. “Building ‘fast and cheap,’ we solve current social issues”; meanwhile, the safety of human lives is ignored. The press covered the subject, but not in the way that it deserved. The process of revealing murderer-builders and subjecting them at least to moral accountability is terminated for unknown reasons. Meanwhile, giving a notion of the severity of the crime is the testimony of R. I. Medinsky, who served in the disaster zone from the start and who describes in the corpus Spitak’s Memorial 1988–2008 that he saw with his own eyes the “rejected” quality control factory seal on the metal–concrete slab. But wasn’t the building approved by committees, which were comprised of party [members] and state employees? A question arises: “Where was the public, the Armenian electoral farce, looking when essentially it was driving its people to the grave?” (Moscow, Dossom publishing house, 2008, pg. 58).

WHY did the relevant bodies ignore the warnings voiced before the earthquake? “… Back in 1986, the USSR Academy of Sciences’ Interdisciplinary Council of Seismology and Seismic Resistant Building informed of the likelihood of a magnitude 8 earthquake in the Leninakan-Spitak-Kirovakan area. Moreover, several protective measures were proposed; that is, to restrict construction in the noted areas, strengthen weak constructions, dismantle buildings subject to collapse… shut down the nuclear power plant and the production of poisonous chemical material. Advice was given to develop a possible scenario situation and teach residents to know how to act under such conditions,” writes academic Grigor Avagyan in an article titled “Pain in our Hearts, Our Outlook on Tomorrow” (Grakan Tert, Feb. 3, 1989)… This advice was heard as a cry in the wilderness before the disaster, but even after the earthquake it’s not known what attention was given, for example, to Izvestia’s Jan. 10 issue, where Japan’s achievements in seismic resistant construction were presented. The Armenian press, anyhow, didn’t notice it.

WHY did state authorities allow the extorting of bribes from earthquake victims for aid that a sympathetic world had freely provided? This alarm is raised by German-American writer Lois Fisher–Ruge, who permanently resides in the Federal Republic of Germany (“Confession of Love,” Sovetskaya Kultura, Jun. 17, 1989). She writes a book, Meine Armenischen Kinder (“My Armenian Children,” 1979) and is astounded that Armenian Communist officials demand a bribe of1000 rubles from the parents of these very same children, if they’re still alive, or from their relatives to provide temporary homes.

WHY was foreign aid directed to sectors having tertiery significance? Citing terrifying facts are writer Seda Vermisheva, lecturer Levon Hakobyan, and engineer-builder Ashot Khachatryan in the article “Step Toward the New” (Grakan Tert, Aug. 4, 1989). “… the state builder only compiled… an immense list. From the 78 offers of gratuitous assistance, 22 haven’t even been discussed. Of the 36 offers to create a joint enterprise, 20 haven’t been discussed.” Meanwhile, 600 million rubles of “charitable allocations” was planned to be spent… on building laundromats, hair salons. And included in foreigners’ offers has been constructing “a factory of mountain tractors that can accept rocky lands.” There’s talk of tremendous funds that were blown away by the wind, in that case when “the country lost 13 billion rubles of national wealth as a result of the earthquake.”

WHY in deciding the place of rebuilding Leninakan were important criteria — the strength of the lithosphere and the need not to use rich, fertile soil for construction — not taken into consideration? It was decided not to begin the city’s reconstruction from the center, so that the work of cleaning the rubble and constructing new buildings took place simultaneously. In an article title “Don’t Play with Leninakan’s Fate” (Grakan Tert, Mar. 31, 1989) Academy of Sciences of the Armenian Soviet Socialist Republic correspondent-member Gevorg Ter-Stepanyan challenges the option, to which the authorities are inclined, of rebuilding Leninakan on the even and easy for building, but neither seismic resistant nor prolific lands of the village of Marmashen. He effectively supports adopting the rocky lands of the village of the little-affected Aygabats. We find out from the article, as well, that USSR government leader Nikolai Ryzhkov left choosing the place to Armenia. It’s unfortunate that there were only a small number of references to the subject, especially by journalists. As a result, the preference was given to Marmashen, which is also a windy area.

WHY did Moscow-based “central” news outlets put the emphasis on incidents of pillaging when they were sporadic in the disaster zone, while self-sacrifice and heroic acts were in the masses? Grigor Janikyan, in his report titled “The Flight of the Pyunik Bird” (Grakan Tert, Dec. 23, 1988) cites an entire conversation by Kirovakan residents on this topic: “The program Zhamanak [“Times”] begins, on the screen is the young gasoline vender from Leninakan, his stolen gun, sword, his bundle of money…

“- Didn’t they find anyone else in all of Armenia? They should’ve shown our driver Andre, from whose house six coffins were removed simultaneously, but the poor soul didn’t go mad; the next day he went with his truck to remove rubble.

– They could’ve described the engineer from Stepanavan, who saved an entire class and in the end he died.”

The author of the article doesn’t comment on the Kirovakan residents’ remarks, but during those days it was clear to everyone that along with everything else, the USSR’s most rebellious country, Armenia, was being discredited.

WHY weren’t Armenian clergymen beside the people after the ill fate? This is the question in the axis of the article “Bless and Anger” (Eduard Militonyan, Grakan Tert, Aug. 11, 1989). By the way, the person asking the question is Norik Muradyan, the first secretary of the Spitak Regional Committee of the Communist Party of Armenia. He tells the writers who’ve gone for a visit that there’s a line outside the door of Mother Teresa’s four sisters, while Armenian clergymen haven’t even gone around that way. The press of the time is silent, while we find out from sources of later years that not without Norik Muradyan’s efforts, the bells of the new church were ringing in Spitak at the first anniversary of the earthquake, which was supposed to have helped Armenian believers to be consoled through enlightened clergymen.

WHY wasn’t a clear answer given to the people’s anxiety that the earthquake was made-up, or the hypothesis was considered absurd (“Toward Leninakan,” Vahram Martirosyan, Grakan Tert, Dec. 8, 1989)? The aforementioned Norik Muradyan, for example, 20 years after the earthquake, speaks of the underground explosion of an atomic bomb and the possible use of a tectonic weapon. In his opinion, “it’s no coincidence that appearing in Armenia on the eve before the tragedy was Boris E. Shcherbina, who was responsible for military building and scientific-technical equipment in atomic weapons testing areas in the Soviet Union. Coming after him was USSR Minister of Defense Dmitry T. Yazov with a group of officers from the main military base, while all portable missile installations and the units from northern Armenia were quickly redistributed.” Muradyan also considers bizarre USSR Minister of Foreign Affairs Eduard Shevardnadze’s remarks, delivered at the UN session in New York: “We didn’t expect the consequences would be so catastrophic.” Perhaps theories of an artificial earthquake or its artificial incitement might seem to experts to be ridiculous expressions of conspiracy theories, but the majority of Armenia’s population was convinced that the Soviet leadership would want and was capable to “apply” a natural disaster on our country, the eloquent evidence of which was the regional committee secretary’s remarks.

WHY were only 15 dwellings built in Leninakan instead of the 80,000 square meters promised by the Supreme leadership of the USSR? Why didn’t the disaster zone become the main topic at nationwide rallies organized by the Karabakh Committee? These questions were also raised in the article “Toward Leninakan” (Grakan Tert, Dec. 8, 1989), which highlights the desolate state of the city one year after the earthquake.

HOW did it happen, that no one in Armenia staged a mutiny when with the aim of making construction cheaper, the disaster zone’s level of seismic resistance was lowered in the corresponding maps of the USSR, which we’re told by the Dec. 18 issue of Moskovskiye Novosti (“which we probably can’t, since we’re obliged to do so,” says head of the expert group on earthquake forecasting in the USSR, PhD in physics and mathematical sciences Gennady Sobolev). The same author is astounded that preventative work, tests, and inspections haven’t been held in Armenia (in the Caucasus), especially in schools and hospitals, as instructed in the interpretations of the seismological maps. Actions that, say, have been taken in Vladivostok.

After all this I’m inclined to believe that the number of victims could’ve been larger if there weren’t heros.