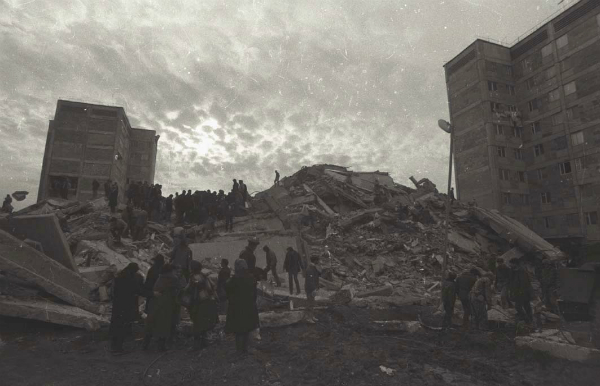 The USSR kept its word: for the first time since WWII, the Soviet Union accepts foreign humanitarian aid — which is more than appropriate, if we consider the enormity of the earthquake. Despite, according to a TASS news agency report, Soviet Minister of Foreign Affairs Eduard Shevardnadze’s assurance during a press conference in New York that “as for medication, construction and other materials and resources that are necessary to eliminate the effects of the earthquake, we won’t have problems here,” the lack of cranes or, say, artificial kidneys is felt from the first few hours.

As a result of such announcements, or as usual, Soviet officials are not believed inside or outside the USSR. Details about the victims are the questions everyone’s asking, which Soviet newspapers ignore for a long time or don’t receive. “Why do we have to wait for hours after a catastrophe to find out what’s happened in our small country? why only on the 7th day of the disaster is it confirmed that not 28, but 48 residential communities have been significantly affected by the earthquake?” asks author of the article “Path Through Pain” Novik Darbinyan (Avant-garde, Dec. 18, 1988).

From the foreign press, The New York Times (Dec. 16, 1988) cites Soviet officials, who were noting the number 55,000. Meanwhile, French experts in the same paper were saying that in their opinion, 100,000 people have died in Leninakan alone… Big numbers inspire more faith, but they were far less further from the truth.

Twenty years after the catastrophe, according to Armenia’s state archive, the earthquake had completely demolished the city of Spitak — of its16,000 residents, 4,000 were killed, half of whom were children. Also destroyed was 80% of the residential area of Armenia’s second[-largest] city, Leninakan. Half of Kirovakan’s buildings were still standing. Affected were 400 villages, 58 of which had completely crumbled. On a national scale, 25,000 had perished, while 17,000 were wounded. The number of those left homeless was more than half a million. There were 21 affected cities.

The earthquake had disabled 40% of the country’s production potential. Studying in damaged schools were 210,000 children; in kindergarten schools, 42,000; Affected were 416 medical centers, 14 museums, 391 libraries, 42 movie theatres, 349 community and cultural centers. Out of commission were 600 kms of roads and 10 kms of railway.

According to seismologists, the energy released from the fault rupture was equal to 10 atomic bombs dropped on Hiroshima.

It might seem that 25,000 dead is a small number. But The New York Times describes a man who committed suicide in the hospital because he lost his entire family. There were many such families. Soviet newspapers combined news of the deceased with stories of survival.

“On one of the streets of Leninakan I saw a woman dressed in black. She, with a wayward glance, was asking, what happened, why have you come? Someone prompted, she’s lost her children, she’s moonstruck.” This is from L. Shvedova’s correspondence (TASS news agency, Dec. 16, 1988). “It was time for chemistry class. Our class’s 29 students, along with Comrade Margo Avetisyan, remained under [the rubble]; I don’t know what news there is of them,” describes a Leninakan student (“The children are surrounded by care,” A. Baghdasaryan, Evening Yerevan, Dec. 14). After the death of Comrade Margo and a boy in the class most likely named Vardanik, the people’s collective mercifulness changes the domestic hero of humor — the Aparan resident is selected.

But the country’s (and the media’s) main concern, more than confirming the number of dead, is saving those trapped under the rubble. Why isn’t there Soviet rescue infrastructure, aren’t there experts? again asks the Avant-garde reporter (“Bill, Jean-Marie, Philip, and the others,” Dec. 18, 1988). “Where are our rescue teams, trained dogs, special experts? Till when must we speak of this?” asks reporter G. Korzh, outraged.

Apart from material assistance, France sends 500 rescuers. Israel sends a group of rescuers, two armored vehicles, and a powerful tractor with a lift. Along with enormous assistance, the US sends rescuers.

International assistance was immense and incredible, not to mention surprising, as it was often those who helped who expressed gratitude for being given the opportunity. The principle characters of an article titled “American Rescuers Return Home (45 People)” express their gratitude to the USSR authorities, for allowing the US for the first time in 60 years to “provide humanitarian assistance to the Soviet Union” and, along with other countries, relieve the suffering of thousands of people (Izvestia, Dec. 17, 1988).

The issue of rescuers later is repeatedly raised by Armenian and other non-Armenian Soviet journalists, who as newspaper correspondents witness the efficient rescue assistance by foreign volunteers. At the same time, substantive criticism of the work of the party and Soviet bureaucracy is quite rare in the local and “central” press.

In that sense, almost unique is Pravda’s Dec. 15 criticism in an article titled “On the Backdrop of Misfortune” concerning the “calculation of extremely poorly organized cargo by Armenia’s Council of Ministers.” Spiegel, however, doesn’t have a stifling problem: it reports that rescue work in Spitak was halted for 3 hours for the city to be “prepared” for Comrade Gorbachev’s visit. This when, as Minister of Health of the Soviet Union Yevgeniy Chazov had declared, every delayed hour steals 20 lives out of the remaining thousand trapped under the rubble.

The restriction on criticism had clear goals. In an interview given to Central Television in Armenia and Armenian TV correspondents, which was disseminated by TASS on Dec. 11, 1988, General Secretary of the Communist Party of the Soviet Union Mikhail Gorbachev is angry: “Created here are black coats–wearers, white coat–wearers, and the bearded — in both Azerbaijan and Armenia.” This sentence, probably incomprehensible to the new generation of today, refers to Azerbaijan’s National Front and Armenia’s Karabakh Committee, around whom the people had organized in 1988. Because of the massacres in Azerbaijan, a nighttime curfew was declared… also in all of Armenia. The Karabakh Committee’s greatest fault during that time was considered the request to cancel the curfew (“In the main streets and at intersections are tanks and armored vehicles,” David I. Guy, Vechernaya Moskva, Dec. 9, 1988), which was justified by the fact that no major incident had been recorded during the curfew, while required absurd permits were hindering assistance to the disaster zone. Gorbachev is angered by the fact that those affected by the earthquake are interested in Karabakh’s fate. “We allocated 500 million for such a small province [i.e. Karabakh],” he says, without noting that overseeing the money would be Azerbaijan’s leadership, against whom the autonomous region was revolting.

The Karabakh Committee was busy organizing rescue efforts, taking buses off their routes and stamping with its own seal, sending rescue teams to the disaster zone. Meanwhile, the Kremlin had its own plan: taking advantage of the fact that people were stricken, only days after the earthquake they arrested all of the Committee’s members and many activists. An article titled “Hour of Misfortune and Hour of Responsibility,” published in the Russian-language Communist and Soviet Armenia newspapers on Dec. 16 and republished in the “central offices,” reported that the Committee is carrying out work “that is actually already carried out by the authorities.” Actually the members of the movement were doing that which the authorities couldn’t do, thereby showing the latter’s inability to act. It’s characteristic that till today who the author of the aforementioned piece is is not truly known.

Updated Dec. 7, 2012: A paragraph describing the story of 13-year-old Arkadi Manukyan was removed as it is repeated in a later article in this series.