Armenia’s Independence and the Media 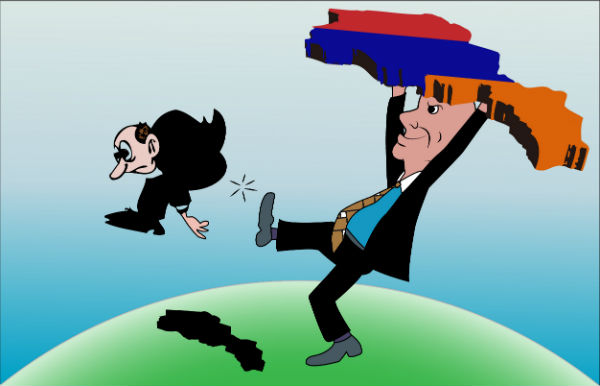 We marked yet another Sept. 21, and once again Armenian politicians, intellectuals, and average citizens expressed themselves on television, in the news, and online about independence.

Led and guided by Hayrikyan, many once again repeated that independence saved Armenia and the Armenian people.

They said, repeated, and sent on its way another anniversary and holiday.

But we know that there are people who are dissatisfied with and complain about independence — and they are in the hundreds or thousands — and they express their complaints and discontent not through the media and publicly, but in real life, among their friends — and they do so quite honestly and without holding back or feeling ashamed.

And it doesn’t cross the minds of those who complain about and those who honor Armenia’s independence (or hold it in high esteem) that they’re speaking not about Armenia’s independence, but about wild and savage capitalism that has besieged Armenia — the capitalism that for some is their bread and water, while for others, the absence of bread and water.

That is to say, from the end of the last millennium of historical events and incidence, Armenia’s independence and the establishment of capitalist order in Armenia occurred simultaneously and parallel to one another.

And while these two significant, historical and fateful events occurred simultaneously in Armenia, we consider Armenia’s independence a celebration and we mark Sept. 21 as a national holiday; meanwhile, we not only don’t consider a holiday or celebrate Armenia’s transition from socialism to capitalism, but also don’t even realize and don’t perceive that transition and reality.

And we don’t perceive it to such a degree that even conversation on that topic neither emerges nor takes place.

And since our conversation also refers to journalists and news outlets, I can’t not say and not add that us journalists likewise imagine and picture Armenia’s independence as unrelated and separate from Armenian capitalism, and journalists, turning their attention nearly every day and on every occasion to the savagery of novel Armenian capitalism, are too lazy to remember and even suppose that the foundation for that savagery was laid practically at the same time as our declaration for independence.

And though our independence and our unprecedented capitalism began and emerged nearly simultaneously, these two phenomena are different and are not connected to each other. They’re different especially and particularly in the case of Armenians because we Armenians dreamed of independence and sovereignty for centuries; meanwhile, no Armenian ever dreamt of capitalism and particularly this type of capitalism.

And regretfully, this simple and rudimentary thing is not understood also by intellectuals and journalists, politicians and officials, oppositionists and government supporters, the victims and those who’ve gained — in short, all of us.

And this is why constantly using the word independence in the media evokes only abstract emotions within us — just as abstract as it evoked decades ago.

We’ve long said good-bye to inhumane socialism, but in its place we haven’t created anything humane, and this is the reason why the word independence evokes quite negative feelings for many.