A Police Force that’s Impartial, Transparent, and On Air 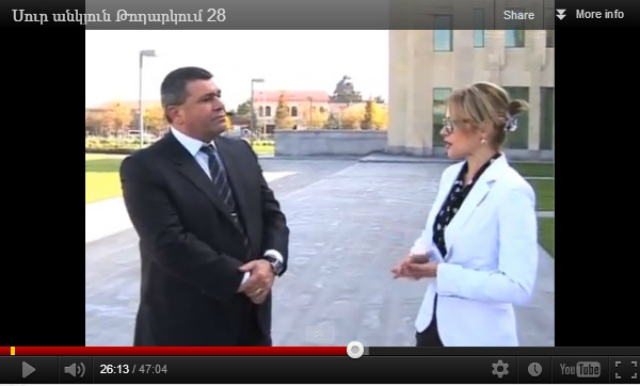 Cooperation between the police and television is deepening and becoming more diverse. Based on mutual respect and understanding, it manifests in different types of programs, special reports, and extensive interviews.

We already have become accustomed to the fact that we have a paparazzo-journalist (Gagik Shamshyan) who illustrates and illuminates police activities and whose image is identified by a unique accident-reporting lexicon and photographing major and minor accidents that have received police attention.

However, recently, becoming a real TV star was neither a journalist nor a regular police officer but police chief Vladimir Gasparyan, who says brief or lengthy, but always opportune remarks on different channels. On Nov. 3, he talked about the need to create an image of knowledgeable and honest police officers, promising that from now on “ignorant police officers or investigators will be transferred to other work.”

He also recalls that journalists and police officers have similar professions, since both fight for justice. On Oct. 20 he offers: “If you see that in our case there’s dishonesty, throw the first stone in my direction.”

During a program broadcast on Nov. 4, the police chief, walking with the church in the background, promises (as they do in action movie trailers), “Soon you’ll hear of wide-scale arrests.” And then he assures viewers that he won’t make us wait too long. In short, to be continued…

The only thing that’s difficult to understand is the role of journalists. On Nov. 2, one of the key figures of Armenia’s police and military forces gives journalists copies of the New Testament, talks about the need to throw stones, transfer those who are ignorant to other work, and to “clean up,” and journalists don’t have the desire to comment or at least to specify in more detail those remarkable, extreme statements.

Journalists cite the remark and render it beautifully. The host of the program, for example, repeats the police chief’s remark that “there shouldn’t be the smell of manicures” from the police force (watch from 22:55–22:59). Too bad he didn’t explain in greater detail what he meant.

“I accept the [Armenian] president’s words directly and verbatim, without subtext and without any imagination,” says the police chief. And the journalists do the same — in many cases they accept the police chief’s remarks verbatim.

By the way, after the meeting between the police chief and journalists, ArmComedy made a joke, imagining the image of a naked police officer.

It seems we’re being accustomed to the fact that the media, which is widespread, and state police and military forces are on the same side of the scale, which is no longer balanced.

Police officers and journalists, with various thin and thick yarn, have somehow become entwined. They’ve become so interwoven that the need for an audience is no longer felt. There’s the impression that the police force and the news media (particularly during this past week) work for each other.