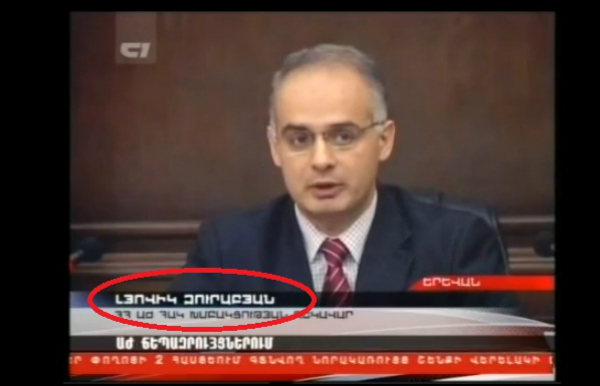 On Oct. 24, a local news website reports that the presidents of Armenia and Artsakh [the de facto Republic of Nagorno-Karabakh] met in Stepanakert. This is news by the Central Information Department of the Office of the Artsakh President. The superficiality of this news is a contradiction to the reality and the fact that Oct. 24 was the third day Armenian President Serzh Sargsyan was in Karabakh, and during that time he and NKR leader Bako Sahakyan were practically inseparable, participating in military training sessions together, going to military outposts together, even opening a church together, but apparently they met only on the third day.

On Oct. 27, another news website reports that there was a UFO sighting in Van. “In the evening of Oct. 25, at 8 pm, Ferhat Firat living in Van’s Selimbey quarter came out on the balcony for a smoke* and saw a red-colored flying object in the sky” (in the screenshot below, a typo in the Armenian word for “to smoke” has resulted in the word “to suck” ). At 10:21 am (the news was published at 9:09 am), Ferhat Firat had still come out on the balcony to “suck”. At 10:48 am, it had become clear that Firhat had come on the balcony to smoke. 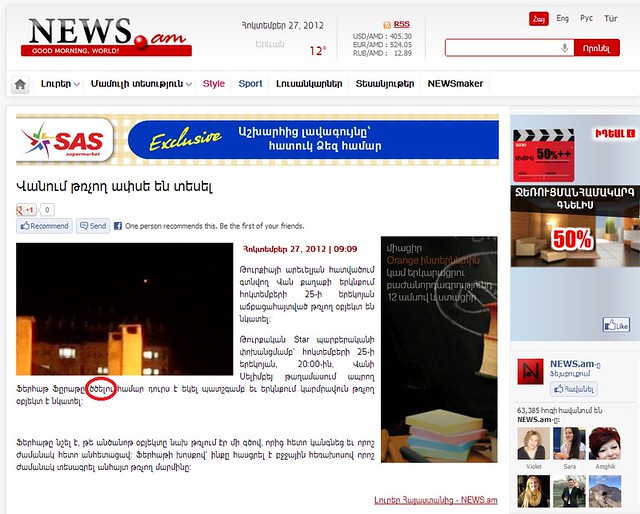 Television is not as inattentive to the written word. There the carelessness lies in verbal remarks. However, on Oct. 25, Arachin Lratvakan (“First News”) displayed an example of carelessness in written text — let’s call it an irresponsibility in titling. In a report on parliamentary briefings, head of the Armenian National Congress (HAK) faction Levon Zurabyan was identified in the title as Lyovik Zurabyan. This is not a matter of taste — Lyovik or Levon? This is a matter of presentation: how does the man in question identify himself to the public?

Let’s turn our attention to other examples of carelessness. On Sept. 9, the day of the local self-government elections, an ArmNews reporter at an electoral polling station approaches an 85-year-old hunched back woman, who can only see the floor of the polling station, and asks: “Are the elections going normally [i.e. without fraud]?” WIthout a doubt, everyone has a right to an opinion, but why should that woman be the only witness of the elections?

The h2 sports commentator’s remarks on Sept. 29 at the 78th minute of the Manchester United–Tottenhem match, when the score was 2:3 in Tottenhem’s favor, was simply “deadly”. The commentator literally said the following: “Tottenhem is now able to avoid its third missed ball.”

On Oct. 15, the host of the program “Aravot Luso” on H1 (the state broadcaster), Arpine, invites to the show the mayor of Hrazdan and asks, you’ve been mayor for 14 years, what have you done? The program’s other host from the side adds, “We’re giving you the opportunity to praise yourself.” It’s evident that the male guest of two beautiful girls shouldn’t whine and complain about the city’s problems, but who said that your task is to invite the man to the show and ask questions about nothing at all? If you know nothing about Hrazdan, why did you call the man and ask him to describe everything he’s done in 14 years in half an hour?

Armenia TV’s Sur Ankyuny prepared a report titled “Amot Dzez” (“Shame on you”) for its Oct. 21 broadcast. The reporter lists the first and last names of Vanadzor officials who have a debt to the city budget and continues: “There are prosecutors and parliamentary deputies in the list.” This sentence, in general, is breaks the rules of journalism — first, the journalist should’ve listed the deputies’ names, then the names of the city officials. Everyone knows the names of the Members of Parliament, whereas it’s possible that even a resident of Vanadzor doesn’t know the names of his city’s officials. Parliamentary deputies were elected; city officials, appointed.

Let’s conclude the list with one of Shant TV’s soap operas. The protagonist, after fighting with his sister or girlfriend (I was unable to predict) in the bedroom, reaches out his “hand” in reconciliation with the following words: “Deal, sister” [said in slang].

These are just a few small examples of vocabulary chaos. Even with the naked eye or ear, one understands that these words are not in their [right] place. All these incidents of carelessness in titling, verbal remarks, and text draw us into conflict.