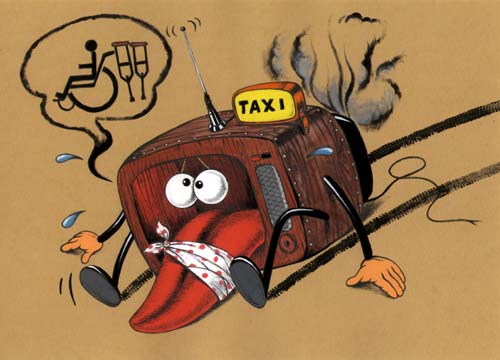 After a 10-year hiatus, Ayb-Fe (the A1+ news program broadcast on the ArmNews TV network) has returned to major airwaves and it’s been a few days that I, like a person lost in the forest, have been gasping for air. Of course, over time I will learn but at this moment independent journalism even in its form doesn’t calm me.

Something like this hadn’t happened for a long time and without realizing it it graces our ears. I’m sure experts can point to many shortcomings, but I, as a citizen, for a few days now have been choosing voluntarily to “go into the forest” by immediately turning on ArmNews. This channel has now become a main source of news and aspires to the status of a household member.

Out of interest I decided to view the main news programs of other TV channels and make a comparison. Of course, I didn’t include Armenian Public TV’s news program Arachin Lratvakan (“First News”) based on the need for in-depth analysis arising from the seriousness of the mission.

I made a deliberate decision to watch Monday’s broadcasts since on that day the details of the well-known incidents at the Harsnakar restaurant complex were going to be heard in court. Moreover, I was familiar with the case and could judge the level of media freedom according to several criteria.

After all, it was an important event for the state since involved in the crime were the interests of the parliament, the defense ministry, the army, the police, and the general prosecutor’s office. Moreover, from the perspective of danger to the public, a probable murder case where a military officer was killed was being investigated.

It was an unprecedented incident, and I hoped local news outlets would ensure proper coverage. If not, then much would be revealed.

Naturally, each TV channel has to try to provide unbiased coverage according to its stated values and within the limits of the law, where high-quality journalism will keep citizens away from enticement that is biased, brief and unsubstantial, does not frequently cover events, disseminates false information, and is not perceived.

In addition, in the continuous pursuit of high-quality media, the news outlet won’t become a victim of internal and external political machinations and won’t indiscriminately attack the public. Consequently, any TV channel’s news broadcast most likely will proceed from its stated values and have a certain fixed logic and format.

The fact that local TV stations haven’t even clearly defined on their website their mission and objectives already points to possible arbitrary and therefore unprotected airwaves and journalism. A channel operating under such conditions, as a rule, has a declared owner, by way of either a political party or an individual (it’s not recorded but everyone knows), fulfills orders, and serves narrow group interests.

But this, perhaps, is the most harmless part, since in other cases, journalists and individuals providing the news, not having an entourage or any horizons, independent of their will or in some cases deliberately, are used by others and serve other interests.

It became clear on Monday evening that, apart from deliberate deviations, among the different stations, there are differences in creative staff, editorial teams, and perhaps for other reasons.

For example, Yerkir Media is attentive to Armenians living abroad and events affiliated with them, Shant TV promotes its own entertainment programs during its news broadcast, and A1+ likely places importance on life in Armenia’s regions, and so on. 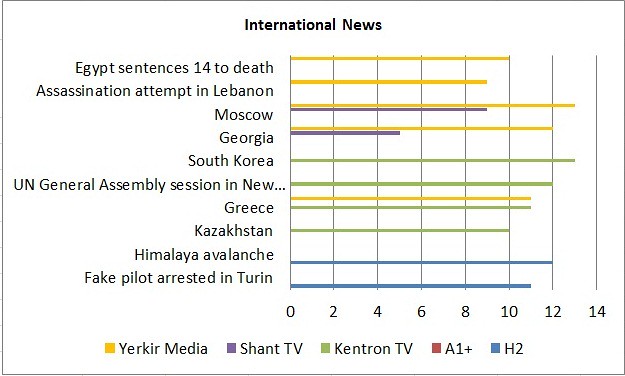 Note: The x-axis in the line graph above depicts how frequently the given news topic was broadcast. The different colors of the lines show the TV station that broadcast that particular news item.

It wasn’t clear, to be honest, from other TV stations’ compilation of international news why they had especially focused on those events, what geopolitical interest or basis they have, or how they serve their mission. The arbitrariness was felt even with the naked eye; meanwhile, internal or regional events could’ve had better coverage and fragmentation could’ve been avoided on account of the reduction of diversity of news.

It’s interesting, only two channels provided coverage of the court hearings on the Harsnakar incidents. While Ayb-Fe attempted to cover the event unilaterally and include the interview of (only) one side’s attorney, the Horizon commentator merely read the notice about the court session being postponed.

Lraber too, because it mainly covers press conferences, became victim to the attack of the “manipulation of public polls” and, without accounting for alternative professional opinions and a balanced comparison, broadcast the findings of Aharon Adibekyan’s poll.

According to these findings, Prosperous Armenia party leader Gagik Tsarukyan was the most preferable candidate for president. As if this wasn’t enough, the other channels were showing villagers’ grape harvesting process at the Yerevan Ararat Brandy-Wine-Vodka Factory and extolling Gagik Tsarukyan’s state activities and genuine concern for the villagers.

Then the benefactor directly addressed the grateful people who were full of emotion and said, “His words are action.”

I had repeatedly heard these words personally from his and his party members’ mouths. If Mr. Tsarukyan indeed decides to participate in the upcoming elections, then the slogan “MY WORDS ARE ACTION” will become a readymade and influential tool and will secure the final victory of the Prosperous Armenia’s “OUR WORDS ARE ACTION” parliamentary elections slogan.

Who knows? Maybe these unnoticeable preparations are because of this. I wonder, do the channels reporting the news know? 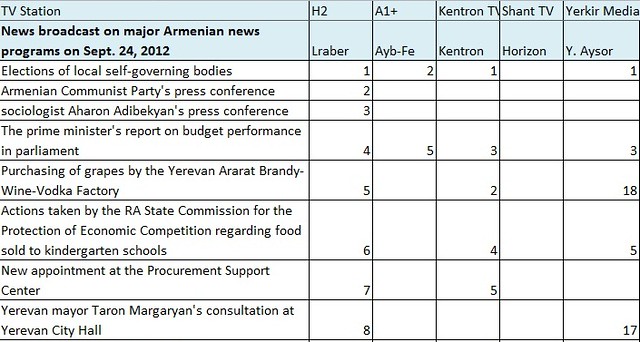 The figures in the chart depict the order the given news item was broadcast. For more detailed information, click here (in Armenian only).