How to Depict Tragedy in the News 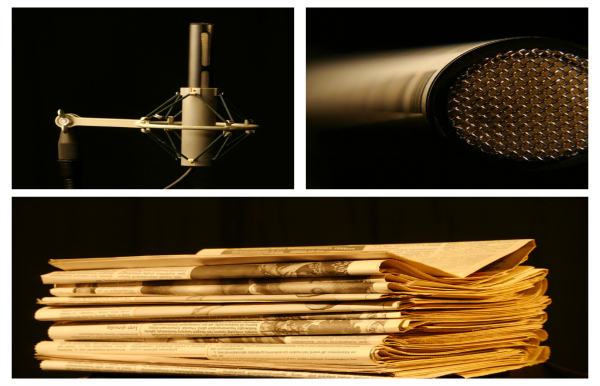 Recently, Armenian news sites published information and shared a video that apparently showed rebels mocking former Libyan leader Muammar Gaddafi’s corpse. The Russian site Newsru.com in posting the video issued a special warning: this video contains violent scenes, and it is strongly recommended that people with weak nerves not watch it. An hour later, the Russian news site changed the headline of the article: instead of the word “gruesome” it wrote “Unknown Video: Rebels Amuse Themselves with His Body like a Doll”. Leading Russian news sites, Ria.ru, Lenta.ru, however, didn’t cover the video at all — naturally, for ethical reasons.

Local Armenian news site News.am published this news in the top 4 news stories on its main page — without warning viewers that, to put it mildly, it’s gruesome. Instead, it informed viewers that it’s a startling video. 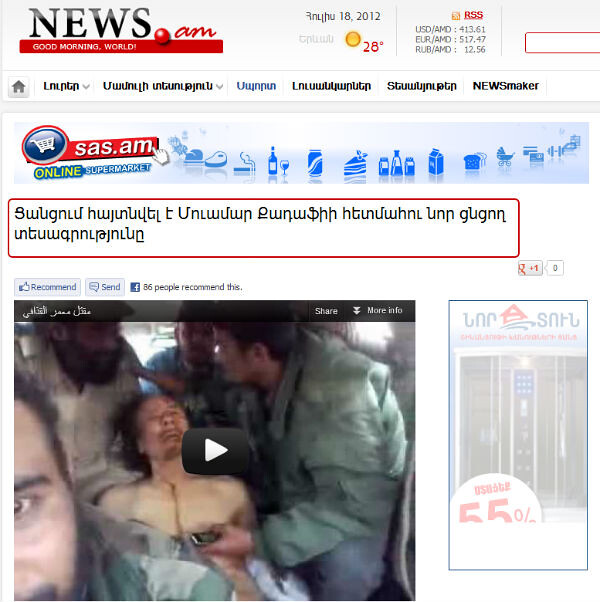 And so, ethics is not a rule of the game in Armenian online news media. When another local news site, Tert.am, recently reported on a suicide, the scantiness of the news wasn’t because ethics don’t permit details to be revealed but because that was all that was known at the time. And, by the way, the site acquires the news not by its own efforts but through well-known local photojournalist Gagik Shamshyan. Sometimes after receiving the news, the news agency doesn’t try to understand the incident it’s dealing with. In Armenia, tragedies usually don’t evoke condolences. There’s the view that it’s ethically not right to delve deep in incidents of suicide or pedophilia. Ethically, it’s appropriate not to write the name of the person who committed suicide.

In fact, at no time should it be written, even if all the circumstances are known. Why not? First, because the incident rather than the person who committed the act is more significant; second, it’s possible that the person who committed suicide tried to keep himself from harming anyone. Or, say, he killed himself from shame — or an incurable illness. Or from the threat of being disgraced. This last option occurred often in medieval Japan. And in the 21st century it was this sort of threat that drove South Korea’s former president to suicide. Of course, his name appeared in the press on the day he killed himself. In all cases when you don’t publish the name or you publish only the initials it becomes easier to talk about the circumstances, that is, the extent of the tragedy.

Instead, the circumstances have to be described in detail. There has to be journalistic investigation. The investigation doesn’t have to bypass relatives or children, but again without naming names or by publishing pseudonyms. If there’s an accused, that is, someone who drove the person to suicide, his name also shouldn’t be published. A court ruling will “return” his name to him.

The same refers to murder or, say, a stabbing. Police reports usually keep such rules of the game. For instance, News.am had discovered through its sources that a stabbing took place near Yerevan Lake. Later, the police confirmed this fact; moreover, police uncovered the identity of the assassin — however, not revealing the latter piece of information to the news agency. When is publishing a first and last name justified, if a state, political or public figure is involved in the crime, but the police refuses to include him in the case as a suspect despite the news agency presenting solid evidence of his guilt? Russian news site often present such cases.

It’s not as if Russian sites are angels in the area of ethics. For example, Life News published a story about a Dagestani student who killed his classmate’s father after the latter shot the student’s parents because of an outstanding debt. Life News published the murderer’s name and added that a criminal case was launched. What is ethics for? If a criminal case has been launched, that means the guilt is not proven — even if a confession was made. Furthermore, there’s the presumption of innocence, as well as the murderer’s family. As a result of the case being made public, the family is unwittingly perceived as being inclined to murder — they will face certain problems in society. Social isolation becomes inevitable.

Usually, news sites, as well as TV news programs, in describing the crime never hide the criminal’s face. This is how they act when they themselves acquire the news. After the death of Vahe Avetyan, we saw what an “appetite” some TV companies have — especially Armenia TV, which showed the faces of the accused in the crime. They were handcuffed, though they have the right to cover their faces. This is ethics.

News sites can’t have images of those faces ready. Parents could provide those photos if they were condemning the actions of their sons, but even in this case news agencies are obliged to refuse the parents’ “charity”. Abroad, it’s accepted that a criminal can cover his face since his guilt isn’t yet proven. There too they don’t avoid details. But, for example, when Michael Jackson was being questioned when he was accused of child sexual abuse, the whole world showed how Jackson appeared in the courtroom. He was coming to prove that he was innocent and everyone had to know that he was coming to do that with an open face. Furthermore, he wasn’t handcuffed when he came to court.

When Michael Jackson died, a few days later everyone knew the name of his doctor, who was accused of killing him. Nevertheless, the press wasn’t allowed in the court and couldn’t find out the details through the court. However, the media managed to find out nearly all the details. Nevertheless, the rules of ethics are a part of certain journalism policies. Every news agency decides itself how to maintain these rules and why.

News.am doesn’t need to be morally or ethically accountable to anyone for the Gaddafi video. When local news sites published the well-known video on the Yeghikner military unit, where a senior military officer was humiliating younger soldiers, the role of ethics was immediately nullified. More accurately, there was no need for ethics in showing the video — the faces weren’t clearly seen anyway. However, the public wanted names, since several mothers had sons in that military base. Nevertheless, after the incident became public, news outlets found out the names of the senior officer and the junior soldiers quite late.