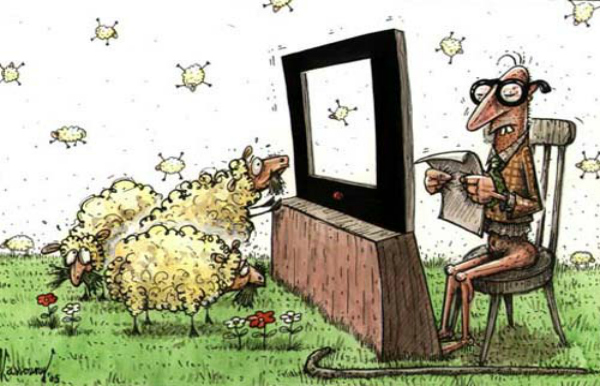 The reflection of television (particularly, soap operas) on real life has been actively discussed recently. Several organizations and individuals called for ridding the airwaves of violence and vulgar scenes, even sending an open letter to the Armenian president to this effect. The demand to oversee broadcasting policies became a public issue in quite a surprising way: the desire to have “clean and harmless airwaves” (according to the authors of the letter) became synonymous with the dream of living in a safe and just environment.

It seems as though society’s diseased organ was finally diagnosed, and in the case of immediate intervention (through “cleansing” soap operas), a successful, beautiful, and confident present awaits us all.

It’s noteworthy that the first to talk about “liberating” life from the danger of soap operas and the need to intervene in TV content were TV companies themselves. Even the brutal beating that took place at the Harsnaqar restaurant complex last month which led to the death of military doctor Vahe Avetyan many TV stations tied to images of violence frequently seen in soap operas. The young man’s death due to “intervention” by the restaurant’s security officers was depicted as a result of general intolerance, shaped under the influence of soap operas that make heros out of thugs. Many TV companies, preparing reports on the army officer’s burial that received a huge public response, issued a few remarks about soap operas. Speaking about the connection between death and soap operas were psychologists and TV reporters, saying that due to the influence of soap operas, the number of incidents of crime in the country is increasing.

Of course soap opera characters have narrow minds, a criminal past, a hopeless present, a hazy future, and barbaric vocabulary, but to believe that by eliminating them life will become better is simply odd. It turns out that if the original (the soap operas) is freed from violence and becomes beautiful, its imitation (reality) will also become beautiful and secure, and only the positive and inspiring will become widespread among the public.

Of course, the soap opera, being one of the most vivid examples of mass culture, is able to create models of behavior, to invent another story full of intrigues and wrought with the struggle between bad and good, right and wrong.

That the soap opera is the main supplier of ideas and myths has long been known. Soap operas remind viewers of and at the same time reconcile them with reality. In the 90s, Brazilian and Mexican soaps in Armenia played the role of a psychoanalyst, helping people separate themselves from a brutal, hopeless, and frightening reality. The soap played the role of a hypnotist, allowing viewers to break away from their lives and become immersed in heated passions, and beautiful characters and interiors. Man can adapt to very poor conditions but he simply cannot survive without dreams. This isn’t a mere romantic claim but a prerequisite to mental resistance.

After all, each person wants an explanation for that which happens around her, that the good and the just will prevail over treachery and low standards. The role of the one who explains is usually filled by mass culture, which disseminates the ruling ideology to the masses, outlining the models of goals and dreams.

However, since Armenia’s independence, no TV station (save perhaps for one) has yet attempted to justify, reinterpret, and portray the upheavals, achievements, and losses of public life through soap operas. An entire social system has been splintered, destroyed, and eliminated and the society that witnessed it has never seen itself in the vortex of passions flickering on the screen. Instead, for years, Armenian TV stations have been depicting a reality that is cheap in more ways than one — in the quality of its filming, the models of its characters, the quality of its scripts, and the development of its story lines.

And the fact that modern Armenian soap operas portray men with thuggish lexicon and behavior and forlorn and incapacitated women is likewise a manifestation of a dream. To put it another way, it is an anti-dream, a utopia, which resonates very much with Armenian reality. Yet an anti-dream has a very expensive attribute: it doesn’t last long; it completely consumes itself. And it does this involuntarily and not from an order from the upper echelons.

One thing is clear: Armenian television isn’t rushing (perhaps it doesn’t even want to) to allow on the screen more profound, established, dignified (and consequently, “difficult”) characters. If, say, doctors, police officers or journalists who do their job well and who in their free time ruminate and speak of intelligent, profound and contentious topics became characters on soap operas, TV viewers would also change. The same could be said about analytical or news programs. When the key figure in a news report or broadcast is an educated, informed and inwardly free person, who is able to notice the stereotypes existing around her (the bureaucratic apparatus, injustice, mistakes from the past, and so on), then she will also acclimatize the audience to “difficult” questions.

And the viewer, too, will one day become “difficult” and will want more from television.