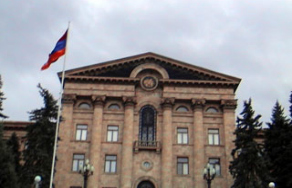 My peers will remember back in 1988, when meetings of Armenia’s parliament at the time, the Supreme Council, began to be broadcast on state television, people were impatiently looking forward to them, gathering in front of their TV sets, listening attentively, and discussing every interesting speech. It was this way too during the broadcast of the meetings of the first and second convocations of parliament after the country’s independence.

To be honest, I don’t remember when those broadcasts stopped, but I think that the TV viewer of the 21st century lost nothing in this, especially since voting during the meetings of the last three convocations were nearly unanimous: barring the critical speeches of the National Assembly factions of the Heritage Party, sometimes also those of the Armenian Revolutionary Federation (Dashnaktsutyun) during the last convocation, nothing interesting happened during parliamentary meetings. Yes, let’s not forget MPs voting in place of their colleagues, which, all the same, hardly would’ve been broadcast live.

The last meetings of the newly elected National Assembly of the Republic of Armenia generated quite a lot of liveliness and interest. Resistance to government proposals has risen sharply, while the speeches of opposition faction members have become more acute; consequently, public interest in the parliament’s work has increased. And it’s no coincidence that the online broadcasts of the last few meetings and the videos published online by different news providers were disseminated and watched with great interest.

But live broadcasts from the parliament’s meeting hall were shown only online — on the websites of not only the National Assembly, but also A1+ news agency.

Nevertheless, online broadcasts are not accessible to all, if we consider that people from very different social strata are interested in the National Assembly meetings. Furthermore, as proclaimed by those following the parliament’s work via the online broadcasts, due to insufficient internet speed, many watch and listen to the broadcasts with difficulty — the image and sound are compromised. Some Internet users also mentioned that the technical problems happened especially during opposition MPs’ speeches.

Taking all this into consideration, I believe that broadcasting the National Assembly meetings live on television is a current issue. In different countries around the world, there are special channels that broadcast the parliament’s meetings and sessions. I believe this practice can be replicated in Armenia.

Regarding this matter, a Facebook group was created called “We demand the live broadcasting of National Assembly meetings on TV,” which has more than 700 members. Those who created the group explain it as follows:

Creators of the group have said that H1 (Armenia’s Public TV channel) can assume this task. Of course, the state broadcaster’s management will explain that it’s not possible to make changes to its programming schedule so that regular meetings — and when necessary, emergency meetings — are shown to the public on live television. But, I believe, it’s not hard, within the scope of the Law on TV and Radio, to provide another frequency to Armenia’s Public TV — with the condition that only parliamentary meetings and programs related to these are broadcast on this channel. As I said before, a “parliamentary channel” is accepted practice in many countries. So too can it be in Armenia. It won’t require huge costs and will allow the Armenian public to follow its parliament’s work via live broadcasts.