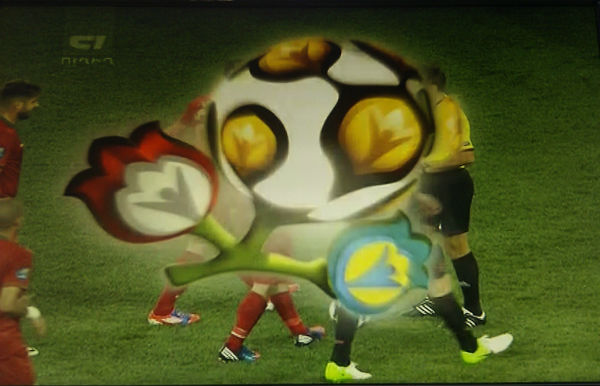 Pen and paper in hand, I have been watching the 2012 UEFA European Football Championship to find out how Armenian television covers this important sporting event. I should say from the start that football took up a significant portion of Armenian airwaves this month: apart from the matches, TV audiences could watch the championship’s daily line-up on ArmNews (at 1:30 pm, 3:30 pm, and 6 pm) and on H1 (Armenia’s Public TV channel), while the previous night’s matches were broadcast on H1 the following day from 6:30 am to 7 am. Kentron TV’s program “ProfFootball” also dedicated a big portion of airtime to the UEFA European Football Championship.

It should be noted that this time, as well, Armenian sports commentators didn’t refrain from omissions, errors and humorous bouts of speech.

For example, my good friend and veteran commentator Slava Sargsyan, covering the opening match on Jun. 8, presenting the Polish and Greek teams, didn’t mention in which clubs the players play. So too was the case with his colleague Armen Melikbekyan. I find it hard to say why this was, but in my opinion, football fans would be interested to know which club players represent. Other H1 commentators, Eduard Kalantaryan and Karen Giloyan, always state the players’ clubs in their coverage of sporting events.

Furthermore, on Jun. 9, the commentator covering the Italy–Spain match said about Italian forward Antonio Di Natale: “He’s not doing anything special, simply running and hitting, but he’s a good football player.” Well, all football players run and hit the ball; it’s just how they do it, but Di Natale, who was Italian footballer of the year in 2010, earned this recognition for his beautiful goal during the match with Spain.

On Jun. 13, during the Germany–Holland match, Melikbekyan made this inexplicable statement: “The Dutch are playing by taking into account the score.” In another instance, assuming the role of coach, he said, “Of course, [German defender Jérôme Agyenim] Boateng shouldn’t have made the kick from here; he could’ve also made a pass.” The same commentator, during the Jun. 14 Italy–Croatia match, said that one of the players “did a half-kick, half-pass.” And when a team scored a goal, instead of shouting “Goal!” as usual, for some reason, he would perpetually say, “And, and, and…”

The commentator of the Jun. 14 Spain–Ireland match said that Irish head coach Giovanni Trapattoni, speaking about their opponents, said, “Today we will playing against the technicians” (he probably tried to translate the Russian word for “well-oiled machines”) — which was just laughable. During the Jun. 15 Ukraine–France match, the commentator constantly confused Ukrainian player Anatoliy Tymoshchuk’s last name, calling him Tymoshenko (he probably meant Ukraine’s former prime minister Yulia Tymoshenko).

It could be said that the main drawback in the coverage in Armenia was that H1 didn’t send a team to Poland or Ukraine where the matches were taking place. The absence of a reporter on the ground was particularly felt when there were unexpected events. For example, the reason for the clashes between Russian and Polish football fans remained unknown to Armenian viewers, who tried to fill this gap by watching Russian channels. Armenian fans found themselves faced with uncertainty also when the Ukraine–France match was interrupted due to heavy rains. We had no idea what was happening in Donetsk — was the rain continuing or not, would the match resume the same day or be moved to the following day. It’s inexplicable why H1 decided to restrict itself only to broadcasting the matches with reporting by a commentator in Yerevan.

Actually, it’s not that expensive or difficult to send reporters to events abroad. And if we consider that live broadcasting of football matches garners a huge audience, viewers could be “kept” longer in front of their TV sets during live broadcasts. And, by the way, the final blow of the umpire’s whistle doesn’t signal the end of a broadcast — the game continues in the locker room, in the stands and on the streets. And let’s not forget the press conferences after the matches, which are usually no less spectacular than the actual matches themselves. But so it is that Armenian commentators, not being present at the press conferences, don’t talk about them or just utter a few cursory remarks.

The work of ArmNews, in terms of getting the late night scores up early the next morning, which wasn’t previously observed on this channel, can be commended. But what was amazing was ArmNews’ young sports commentator, who, assessing how the teams will fare in Group C, strongly ruled out Italy’s participation in the 1/8th finals if Spain and Croatia tie — in this case when a simple calculation showed that, by and large, in the case of a victory, the Italians would move forward to the next phase. Another error in calculations was made by the sports commentator of H1’s news program “Arachin Lratvakan” (“First News”), who said that after two matches, Germany’s place in the play-offs was secured — a statement that commentator Armen Melikbekyan was forced to refute during the Italy–Croatia match.

And so the sporting festivities continue on the screen. I hope that our esteemed colleagues will consider the aforementioned observations, which will help improve coverage of this important football season.