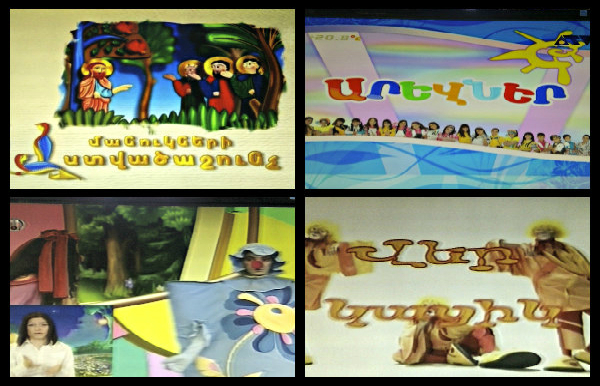 If you recall, at one time, several notable children’s programs were broadcast on Armenia’s Public TV. Today, children’s programming is nearly non-existent on H1 (Armenian Public TV’s first channel), as well as the other two leading TV networks with the highest ratings — Armenia TV and Shant TV. It’s hard to say why.

The informal monitoring I conducted showed that Shoghakat and AR networks provided the most airtime for children’s programming. AR TV, the successor to the Hayrenik children’s channel, broadcasts shows already well established on Armenian airwaves, while Shoghakat has created new children’s programs.

Head of Shoghakat’s children’s programs Hermine Stepanyan (by the way, let me say that neither AR TV nor H1 have such a position) informed Media.am that that there is a demand for children’s programming by viewers. Though no monitoring has been conducted by the TV station to determine the ratings of such programs, there have been many calls and encouraging feedback by viewers.

For the second time, Media.am was unable to speak with someone from ATV. A man at the station who he didn’t say who he was answered the phone and promised to pass on my number to someone more qualified to respond to my questions; however, the calls were never returned.

On Mondays, Tuesdays, Saturdays, and Sundays at 2 or 3 pm, Yerkir Media broadcasts Mankakan Yerkir (“Children’s World”), a program of 9.5 minutes in length hosted by children about school life in Armenia. The program also covers international news of interest to children; for example, on Tuesday, there was a piece about a cat living in Vienna that has become quite idolized by children there. The Mankakan Yerkir studio, however, needs brighter colors and a design more engaging for children, and the hosts have to learn how to be more unconstrained and at ease.

Generally, television is a powerful and influential weapon through which generations, taste and value systems are shaped. But does television today fulfill the function of the proper upbringing of children? With some exceptions, no. It’s time for Armenian TV stations, especially those with high ratings and especially H1, which is fed by the state budget, to pay more attention to children’s programming.

In particular, there is a lack of educational programs — they would be very useful for students during the summer break.

It’s also time to think about moving children’s programs to a more suitable time slot; for example, on H2, Yerevan TV, ATV and Lime TV (formerly Channel 12), such programming is offered early in the morning, from 7:50 am to 8:25 am.