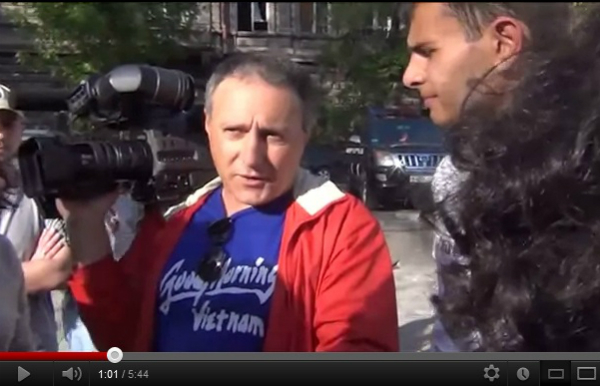 The activists, who have been protesting shop construction in the central Yerevan park for over two months, had filmed the reporter and camera operator on the evening of May 1, the day RA President Serzh Sargsyan had come to the park with Yerevan mayor Taron Margaryan and told him, “Dear Taron, you can see for yourself that this is not nice at all” (referring to the storefronts) and it was clear that the much contested kiosks would be demolished. And in this already obvious situation, the Arachin Lratvakan film crew comes to Mashtots Park. Environmental and civic activists refused to speak to the news program’s employees, asking where were you during the 80 days of our struggle? Is the activists’ position fair? My professional solidarity is on the side of my Arachin Lratvakan colleagues, but they really are in a vulnerable position.

Activists fighting for the park in the winter cold were not shown on the state channel or almost never appeared without a formal occasion. And now, during the run-up to the elections, when the Armenian president and the head of the Republican Party of Armenia list with the mayor who’s secured fourth place on that same list finally responds to the activists’ struggle, the Arachin Lratvakan film crew wants to hear the activists’ side of the story.

a. they’re boycotting Arachin Lratvakan
b. they’re not sure that their remarks won’t be misconstrued on the state broadcaster’s channel

And this is the best response, or in modern terminology, “feedback,” that the state broadcaster can receive. The dozen or so concerned youth fighting to save Yerevan’s green (that is, public) spaces respond to Arachin Lratvakan’s policies with a boycott. It’s a natural move. Just as some state agencies choose which news outlets they won’t work with, so too citizens choose which news programs they won’t collaborate with.

A little bit about the details: It’s apparent in the video how hard the Arachin Lratvakan camera operator is working. He is calmly speaking with the activists and explaining his work dilemma as clearly as possible. And though they don’t trust him, I get the impression that the opinion about the state broadcaster is changing a little.

And one more thing: also seen in the video is that Mashtots Park activists have a stereotypical image of Arachin Lratvakan and its reporters. Maybe the public space defenders should’ve tried to use the opportunity of expressing themselves on public television, which the camera operator was diligently proposing? I understand that the activists don’t have a developed media policy and the idea of a boycott won in this situation.

But this boycott is something like a signal for Arachin Lratvakan, which shows that there are stereotypes of Armenia’s Public TV and they’re not positive.