When Soap Operas and Election Campaigning are Closely Interwoven 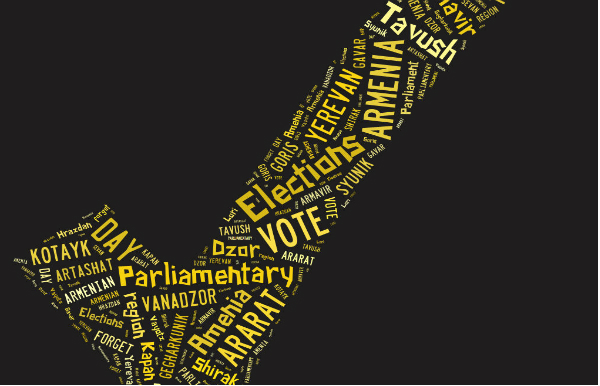 Armenian television is in a very interesting situation: it sways like a canoe in rapid river waters. But with one difference: sitting in the canoe are not Native Americans but paunchy heavy weights in ironclad armor armed with weapons. And the boat has been surrendered to the mercy of fate (it might capsize, but it might also withstand the waves).

The light and non-binding “canoe television airwaves” are commonly filled with lovely news, specious achievements, and glamorous people, which don’t overload the wooden boat and allow difficult-to-pass obstacles (social, economic, cultural, and political questions) to be successfully bypassed. Even soap opera productions create the imitation of a light and consistent swiftness, since the lowly characters in soap operas help viewers experience a catharsis — that is, to see, be affected, and be happy that the reality portrayed on these shows has nothing at all to do with them.

When such a simple, peaceful programming policy became loaded with parliamentary election campaigning, the hidden magic of Armenian television was suddenly emphasized (it really is magic as it prompts the viewer to believe that what’s happening on screen is separate from his life and will).

A novice and naive viewer (for instance, a construction worker from Armenia who’s lived a long time in Russia and returned to his homeland especially for the elections, or an Armenian-Canadian student with dual citizenship) might be surprised at where the soap opera ends and election campaigning begins, since in both cases, those able to perform roles, their stage managers, and those who shape their characters accordingly are closely interwoven.

Of course, election campaigning is a performance — no one disputes this — but the magic lies in the fact that actors in both soap operas and election campaigns mainly work in the genre of melodrama. There are slight differences: soap operas have adopted a coarse naturalism in language (“I’ll come and smash your face in — don’t you know who you’re talking to?”), while political actors speak in moral code, applying a more confiding and cherished intonation (“We share your hardship and concerns, but we’re coming to serve a patriotic cause”).

When you quickly change the channels and “capture” scenes from some TV production, it’s really hard to figure out who’s talking — actors or politicians?. In one place they’re crying; in another, they’re shouting; while yet in another, they’re shouting while crying. Mountains, rains, winds and storms are made use of by election campaigns just as unsparingly as new sofas and renovated apartments are used in the reality of soap operas. Both are not life, but they pretend to be. And willingly or unwillingly, viewers get the impression that the election campaign show is the continuation of soap operas featuring the criminal underworld — the same tricks and overtones and the permanent display of being ready for collision.

It’s been a long time since Armenian television programming saw this much fake emotion and fabricated decoration. It’s hard to manoeuvre the canoe but it can no longer stand. This usually happens when ship captains of different channels are subordinate to and obey another, higher-ranking ship captain. And everything is presented in one genre and dictated by one central force.