Local News Program ‘Zham’ Has a New Studio. What About New Content? 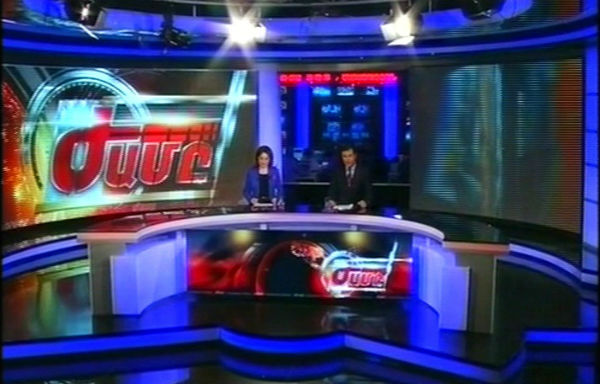 Armenia TV’s Zham (“Hour”) news program has a new studio. For a week before appearing on air with the new studio the TV station was constantly reporting, “Journalism in Armenia’s reality has never been on such a platform, and such a multifunctional studio doesn’t exist in not only Armenia, but also the region.” And Zham manager Artak Herikyan added, “In some respects, creating such a studio in Armenia is folly, and a great risk for journalists to create reports deserving of such a studio and go on air.”

The detailed work that took months is now complete. According to plan, “the modern studio has to set a new rhythm and new style, a new format, since the studio becomes a conversational partner; it’s in movement and presents the information also through didactic methods and graphics.” Hrach Keshishyan, producer of Panarmenian Media Holding, of which Armenia TV is a part, said: “Never has Armenia used such a studio: during broadcasts, moving are the host, the walls, the table and certain interesting technological transformers.”

This new format for Armenia differs in the sense that the broadcaster doesn’t have a fixed place and can allow for improvisation — including walking or standing. The Russian TV station HTB broadcasts news also using this same format. In Armenia, a traditional style prevails in the reporting of news, where the broadcaster is sitting from the start of the broadcast to the end. She or he doesn’t even have the opportunity to stand up or walk around since the studio is not designed to accommodate this.

Zham’s new studio was designed along with Israeli and American colleagues, though it was Armenian specialists, designer Bagrat Divanyan and graphic artist Jor Beloyan, who gave it the “meat and bones.” The news program’s music has also changed — the group behind the new music is Armenian band Apricota. One more change: the duration of the program has doubled and now lasts one hour. Zham’s main broadcast is aired not at 7:30 pm as before but at 8 pm.

“The ultramodern equipment mandates new possibilities and new content, and a team equipped with a completely new concept of news programming and a new form of provision,” says Herikyan. Apparently, not all of the technological opportunities were utilized during the first broadcast with the new studio. There was an attempt at showing viewers the Eurasian Economic Community’s geography and mission with graphics. It worked, but it could’ve been simpler and more powerful.

There were at least two topics in the same broadcast that could’ve been presented to viewers through simpler graphics and visuals. One was the new road to Zvartnots International Airport, which is just outside Yerevan. In this segment, a map was clearly missing on the new studio’s LED screens. The other was the list of candidates for the upcoming parliamentary elections. Here it’s obvious: apart from names, TV viewers need images. The beautifully arranged photos of the top names in these lists would help TV audiences recognize who to vote or not vote for.

In short, at least I was expecting more.

And, most importantly, a demanding viewer watching a news program wants to hear timely, balanced and impartial news and not news cut off from reality and “combed through” beforehand, which our accountable news outlets controlled “from the top” often offer us. Thus, the exterior shine is good, but the main thing is what’s inside, the quality of the content, which is not yet noticed in domestic TV programming.