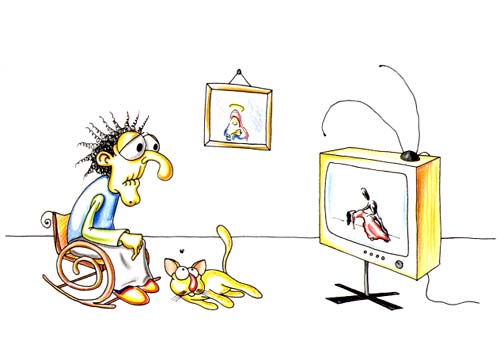 An acquaintance of mine who moved to Anapa, Russia, three years ago said to me recently, “We left the country because things are bad there, right? But we gladly watch Arachin Lratvakan [the Armenian state broadcaster’s news program]. We know the situation is bad there, we know that they’re deceiving us, but from what they depict it’s easy to dream that all will be well.”

A friend of mine who moved to Moscow says: “What we know about Armenia is the only news we get from our relatives, but our eyes don’t see the reality — we see that which Arachin Lratvakan displays. And we have a kind of faith in Armenia’s authorities.”

It’s known that Armenia TV and Shant TV, both broadcast via satellite, also portray news from Armenia through the lens of rose-colored glasses.

“The most important thing for me is saving lives,” says a rescuer on the Horizon news program who’s just received a medal from a state minister. “Against what are the Azerbaijanis protesting?” and “Bomb alert in a psychiatric clinic” — these were some of the news items broadcast on television on Mar. 16.

One of my friends who worked as a journalist in Armenia is now in Poland. We talk on Facebook. He asks me: “What do you want from [Armenian President] Serzh Sargsyan? Let him work.” My friend left the country when Robert Kocharian was still president. Mar. 1, 2008 — when 10 people were killed after national police and security forces were called in to disperse mass protests following the presidential election — hadn’t yet happened. For about a year, my journalist friend criticized the country’s failures and left.

Even my Iranian-Armenian acquaintance says, “The other day they said on Arachin Lratvakan that [Russian president-elect Vladimir] Putin and the US defend Serzh Sargsyan.” “What do you want — a war?” continues my acquaintance who has moved to Armenia, referring to some journalists’ articles that are highly critical of the authorities.

It’s something to consider: Why don’t TV lies trouble the Armenian diaspora — especially those who left the country in the past 20 years? In my opinion, the reason is that we who have remained in Armenia in the unlawfulness of “real time” lies that trouble the soul, everyday we weigh those lies which are heard on television. What we see and what we hear are two different realities.

TV stations from this indigestible Armenia construct a “Fast Food Homeland” for the Diaspora. And, by the way, it’s not every day that reality is mutilated in the news. And the deceit is in this: often reality and the news have nothing to do with each another. Let’s say, two people in the Armenian city of Vandzor commit suicide on the same day, but on the news that day the most you might hear is that there was a fake bomb threat in a psychiatric clinic in the Yerevan administrative district of Avan.

Diasporan Armenians remember that which they saw before they left Armenia. They can compare the lies, in the best case scenario, with what they saw 3 years ago. Today, far from language and memories, they can’t bargain that which is being served.

Over time, what they hear ceases to be Armenia’s other reality and becomes the complete reality. Even online content can’t obscure that which is said on television, since one is no longer ready to face that which casts a shadow on the Homeland.

He who has left Armenia in recent years lives with consolations: Arachin Lratvakan (which they all still refer to as “Haylur”) feeds their hopes that everything is well in the Homeland and only a mentally ill person can threaten a psychiatric clinic (we are informed of this through the Horizon program).

The news programs (Haylur, Horizon, Zham) are the generators of the Diaspora’s liveliness. Five years later, this televised Homeland will remain in the memories of Diasporan Armenians. On Mar. 16, however, our leading news outlets left a different impression on me. For example, can anyone tell me why TV viewers need to know that Armenian police are training? Well, what were they doing before then?

I doubt these details would trouble newly diasporan Armenians. They have left Armenia, but there they have found a 29,000-square-kilometer Homeland, which is the right size for Armenia and for those left here.