Attacks on Journalists in Armenia: A Chronicle 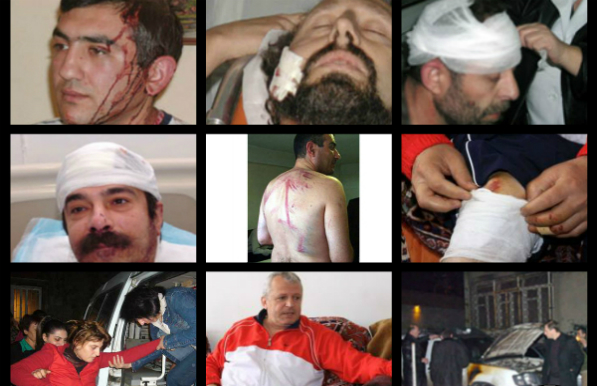 While covering post-election protests in Moscow, several reporters were attacked, the most serious of which was the case of Ulyana Malashenko, a reporter for Kommersant FM, the broadcasting arm of the independent business daily Kommersant, who was hospitalized after being struck twice in the head with a baton by police dispersing the crowd at Lubyanka Square. Reporters from Moskovskie Novosti, Ridus and RIA Novosti were also arrested the day following the presidential election.

Incidents of reporters attacked following the Russian elections gives rise to reflect: what guarantee is there that the same won’t happen to reporters covering the upcoming elections in Armenia? After all, elections are not too far away and there hasn’t been an aversion to attacking reporters in the past in Armenia too.

Let’s try to recall incidents of assault on media professionals in the country since Armenia’s independence.

One of the first victims was Aram Abrahamyan, chief editor of the local daily Aravot, who on Oct. 19, 1994, was brutally beaten by two unknown assailants in the foyer of his apartment building. Abrahamyan was hit over the head with a metal rod and subsequently hospitalized with a concussion.

Speaking to Media.am, Abrahamyan inferred that he was attacked because those who didn’t appreciate his criticism of the Armenian Revolutionary Federation (Dashnaktsutyun) on state television wanted to seek revenge. The assailants have not been identified to this day.

In 1995, Armen Baghdasaryan, leading correspondent for then opposition daily Azg, was beaten by two individuals outside the editorial offices. Initially, the attackers asked the journalist to show his credentials, subsequently beating him and eventually breaking his nose.

Also in 1995, Hakob Avetisyan, chief editor of Azg, was attacked just outside the elevator in his building. According to witnesses, a second man was waiting for his friend, the attacker, near the building entrance. Neither of the individuals have been identified.

On Mar. 8, 1999, journalist and publicist Tigran Hayrapetyan, 35, whose critical analytical pieces had become a real headache for the ruling authorities, fell victim to an automobile accident under suspicious circumstances on a major Yerevan street.

It’s harder to consider it a coincidence when a grenade explodes at a journalist’s feet. It’s hard to believe that the criminals on Oct. 22, 2002, confused well-known journalist and deputy director of the Yerevan-based Caucasus Media Institute Mark Grigoryan for someone else. In all likelihood, the attack was directed at Grigoryan and was previously planned. It’s indicative that at the time he was conducting interviews for an article on the third anniversary of the Oct. 27 parliamentary shootings in Armenia, which he planned to write for a London-based online publication on the Caucasus. He eventually left Armenia, receiving political asylum in the UK. Currently, Grigoryan lives in London.

In 2000, about 30 supporters of Prosperous Armenia Party leader Gagik Tsarukyan broke into the offices of opposition daily Haykakan Jamanak (“Armenian Times”), destroying and damaging property and assaulting the reporters there. According to a statement, apparently Tsarukyan wasn’t happy about a particular piece published in the paper concerning his shares in Abovyan’s Kotayk brewery. No criminal proceedings were launched by police regarding this incident. The bodily injuries received by newspaper staff were not serious.

On Dec. 28, 2002, at around 7 pm, Armenian Public TV and Radio Chair Tigran Naghdalyan was fatally shot outside his parents’ Yerevan apartment with a single blow to the head. On Mar. 15, 2003, Armen Sargsyan, brother of Republic Party leader Aram Sargsyan and of prime minister Vazgen Sargsyan (one of the men murdered in the Oct. 27, 1999 parliamentary shootings), was arrested on charges of organizing the murder. He was subsequently sentenced to 15 years in prison, but he was released in September 2008 on parole, after serving a third of his sentence.

Reporters in Armenia are attacked not only in the capital. For example, Abovyan TV founder Artashes Mehrabyan and Executive Director Azniv Chizmechyan were beaten on Aug. 24, 2002.

On Apr. 5, 2004, skinheads reportedly snatched photo cameras from Haykakan Jamanak and Aravot and a video camera from Hay TV after a rally organized by the National Unity party.

On Apr. 30, 2003, Mher Ghalechyan, a reporter with the local daily Chorrord Ishkhanutyun (“Fourth Estate”), was attacked in his office by two unidentified individuals.

On Aug. 24, 2004, MP Levon Sargsyan’s bodyguard attacked Photolure photographer Mkhitar Khachatryan and Aravot correspondent Anna Israelyan while the pair was photographing the homes of state officials as part of a special report on deforestation in Tsaghkadzor.

On the evening of Nov. 22, 2004, a Lada Niva vehicle belonging to Haykakan Jamanak and primarily driven by chief editor Nikol Pashinyan was set on fire. The circumstances surrounding the explosion were never uncovered.

Hovhannes Galajyan, chief editor of local daily Iravunq (“right”), has been assaulted twice: once on Sept. 6, 2006, and the second time on Sept. 15, 2007. The first time he was attacked from the back while leaving his home (and assailants continued to beat him while he was on the ground) and the second time, when Galajyan was with the newspaper Iskakan Iravunq (“real right”), he was attacked near the newspaper office with metal rods and was hospitalized for two weeks as a result. The attackers have not yet been found.

On Jul. 13, 2006, Chorrord Iskhanutyun and Aravot photojournalist Gagik Shamshyan became a target of intimidation and threats and was subsequently attacked.

On Feb. 8, 2007, unidentified individuals set fire to the car belonging to Ara Saghatelyan, director of Panorama.am news site and editor of Im Iravunq (“my right”) weekly.

On May 9, 2007, when dispersing an election rally of an alliance of several opposition parties known as Impeachment, police attempted to seize photojournalist Gagik Shamshyan’s camera and also used tear gas on Tsovinar Nazaryan of the daily Hayastani Hanrapetutyun (“Republic of Armenia”), who was trying to film police actions.

On Oct. 23, 2007, journalist Gohar Veziryan of the same paper was attacked during a peaceful march.

On Nov. 6, 2007, during an audit of Gyumri-based GALA TV by Armenia’s state tax service, one of the inspectors attacked a camera operator filming the audit, attempting to strangle him and snatch the camera from him. After the cameraman complained, police launched an investigation but on Nov. 30 decided not to file criminal proceedings.

On. Jan. 30, 2007, unidentified individuals set fire to the Prado jeep belonging to sports commentator and founder of the weekly Football+ Suren Baghdasaryan. This was the second time his car was set on fire: the first incident occurred in 2006, when Baghdasaryan commented on Armenia’s Pyunik football club’s decision to refuse to play against Azerbaijani football club Neftchi. Police were never unable to uncover the individuals responsible for either of the incidents.

On Sept. 21, 2008, brutally beaten in the cafe Odnoklassniki, Andranik Babayan was in a coma for 8 days before he died. Babayan was killed accidentally as the assailant mistook him for Artur Sahakyan, co-owner of the cafe and head of the Radiolure program on Armenian public radio. After his life was spared, Sahakyan moved permanently to the US.

On Nov. 17, 2008, at around 8 pm, unidentified individuals attacked Investigative Journalists NGO chair Edik Baghdasaryan in Yerevan, who was hospitalized with cranial trauma. The assailants had not put forth any demands prior to attacking Baghdasaryan. The identities of neither the attackers nor those who ordered the attack were ever determined.

On Apr. 30, 2009, there was an assassination attempt on Armenia Today news agency coordinator and former attorney Argishti Kiviryan near his home at 5 am. He was beaten and then shots were fired in his direction. Witnesses say Kiviryan was hit with truncheons, for which he was hospitalized. His colleagues assert the assassination attempt was tied to his professional activities.

Just after midnight on May 7, 2009, two unidentified individuals beat Shant TV host Nver Mnatsakanyan, 52, near his home, for which he was hospitalized.

In nearly all of the aforementioned cases, the criminals went unpunished.

P.S. Perhaps I have not listed all such incidents. I ask readers to kindly complete the list by using the comments section below to add other incidents of attacks against journalists in Armenia.