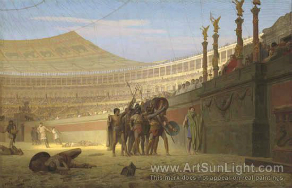 People’s behavior in large groups changes drastically. The force of mass revelry has an inadequate total influence on individual expression. One loses himself in this psychological state, becoming but a mere part of the masses — often imparting on him the deceiving feelings of strength, power, security and invulnerability. Picture for a moment, a poor and pauper Roman’s delight when in the arena another slave was stabbed to death or an exotic animal was killed. Imagine the enjoyment of the plebs who had no means and the ascent of its own self-appraisal. They say that during the gladiator games and spectacular animal sacrifices it wasn’t uncommon for people to be engaged in sexual activity. It was a part of the ubiquitous gratification. The audience experiencing sexual pleasure and the illusion of fear from the outpour of dopamine demanded the continuation of the revelry again and again. In the later period, gladiator games and sacrifices took up a third of the year in Rome. They are the tools that organized and arranged public life and are a distant relation to the football matches, stars’ concerts and other mass events of today, which claimed the lives of numerous animals and, according to some estimates, 80,000 gladiators annually. It’s interesting, who financed this bloody revelry and why? This was the patricians’ gift to the plebs ahead of the regular elections.

The wealthy had an obligation to give back to the public. But this last period of the Roman Empire was so depreciated that it became a unique printing press and vote-buying machine for politicians of the time, thereby buying the votes of citizens and the sympathy of the plebs. Now these obligations are articulated through corporate social responsibility, when corporations transfer chump change to the public from working capital that often exceeds state budgets and make a spectacular show out of it, turning it into a part of their marketing policy and ensuring the protection and expansion of their profits. On an individual level, they are the rich who do charity, and all this is widely advertised on television and through the press, forgetting one of the fundamental values of Christianity, love and the unprofitable and invisible charity that flows from it, likening those who publicize the benefactor’s reputation and their collaborators to pagan patricians.

A few days ago I was following the incidents taking place in Mashtots Park online and the discussions surrounding these when a TV station was broadcasting Prosperous Armenia Party leader and tycoon Gagik Tsarukyan’s charitable visit to the Union of the Deaf in Armenia, lavishly divided into countless, innumerable benefits, while on another channel, current Prime Minister and Republican Party of Armenia board member Tigran Sargsyan, once again, according to Hayots Ashkharh, was distributing party membership tickets. It really did leave the impression of a late period Roman Empire: the situation with Mashtots Park likened to the underground spread of Christianity was still peacefully coexisting with the gladiatorial broadcast revelry. Here news agencies had assumed the role of self-substantiating in the arena. If I was a journalist I’d definitely soothe my anger with tears. But as a citizen, I’m likewise not in a good situation: it’s all the same — I want to cry. From our fellow citizens receiving party membership tickets who unwittingly have assumed the role of gladiators, from those present imprisoned in a room with their lack of financial resources, from man’s weakness and subservience made gladiatorial through television broadcasting and conditioned by “charitable” acts, intoxicated Armenian TV viewers were getting their usual dose of dopamine through modern technology — and I along with them. For an average citizen of the Republic of Armenia with a lack of financial means, turned into a popular game through the light hand of television, through an act of self-exaltation, the pauper is put in the pillory and with this, it seems the virtue of one who’s found himself in an amphitheater is denoted. I just want to die from shame. I want, like the gladiators of old, to join those who have been “gladiatorialized” today with the call of “Morturi te salutant” (“those about to die salute you”) granting reprieve to desperate captives ahead of battle — or, ignoring my fever, go to Mashtots Park.

Armenia is currently in the period of the Great Lent. Paul the Apostle, in his Second Epistle to the Corinthians, exhorted: “Every man according as he purposeth in his heart, so let him give; not grudgingly, or of necessity: for God loveth a cheerful giver” (2 Corinthians 9:7). One who gives willingly won’t turn television revelry into the act that exists making him equal to others, but rather will keep his wealth, evidence of this inequality, secret from shame. Television also won’t allow its public service, the sacred mission of coverage and awareness, to be turned into an act of social discord where the TV viewer enjoying programming that is a “mind orgy” of the pride in revelry will whisper with playful musical modulations: “I-I-I am be-e-e-tter.”