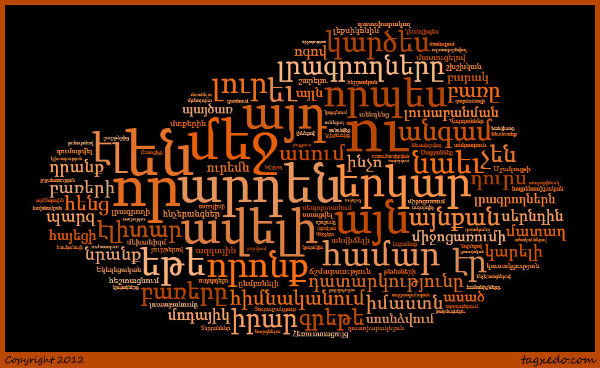 You might’ve noticed that almost no one says the word “news” any more — it’s been replaced with the more weighty “journalism”. We are offered not news but journalism.

Perhaps “news” conceded its place to “journalism” for the reason that the latter is longer and more resounding. Consequently, its meaning is also more evasive. You can hide whatever you want in it — even emptiness.

Semantic emptiness feels quite at home in the words and phrases inherited from the Soviet era, which are given slight national overtones and put increasingly to use mainly by TV reporters. They’re the ones who force viewers to follow the lexicon and thoughts of state officials and ladies that have become the core of news reports — rendering these as undisputed truth. This perhaps makes the journalist’s job easier and relieves her of writing clear and understandable text. Why get stressed and write something if you can allow those who always speak to speak?

The practice of placing words together (the more, the longer and more resounding, the better) is generally a convenient way of saying nothing.

I watch television and discover that there will be a parade and outdoor concert on occasion of St. Vardan’s Day (Vartanants), which were offered as “a holiday teaching the oblation generation.” Added to the church holiday was the ruling party’s sponsorship and it resulted in coverage that, as a fashionable tendency of Armenian programming, could be called “covering an event through the appearance of an event.”

Then in the next TV report it was said (through the lips of the RA Minister of Culture) that “an event aimed at teaching the oblation generation” is declared. The other report presented another “event” of incomprehensible taste (in other words, in bad taste), which was cultural. Let us note as well, that in the coverage of these topics there was also the phrase “to be guided by the patriotic spirit” or the hope that new “Vardans” (or Tumanyans, Teryans or Saryans) will be born and defend our country with an Armenian spirit.

In the coverage of every lawmaker’s press conference, you will come across the same words and phrases of “oblation,” “unbreakable Armenian spirit,” “the task of protecting our nation” and so on and so forth.

It seems words use their initial meaning and acquire a trending significance. Put another way, they become guiding, fashionable and atmosphere-forming. And the consequence of this: they are thrown around so much in the press and on air that they become flat and like an object having a polished surface, they are spread out before the viewer. You don’t even want to pick them up and carefully examine them because you know they’re useless.

Overused cliches sound stranger from the lips of the youth, who repeat them and don’t even once take a breath to ask, why do I say that?

The words used in the media industry today are glued to each other in a surprising way. It seems they’re glued from being strong, immortal and having been worn out. Sticking together, these words induce synonyms. If future, then bright; if a demonstration, then unprecedented; if a singer, then favored. Journalists no longer get worked up trying to update nouns with new adjectives. Everything from the start is presumed bright, favored, great and unprecedented. A teacher is devoted; a politician, “one who’s gone through the turmoil of a fight”; a decision, “unequivocal”; and stores, leisure and even life, “elite”.

It recently became known that kiosks can also be elite. The level of elitism of the kiosks (small retail outlets) dismantled from Abovyan St. in downtown Yerevan and moved to the Mashots Ave. park hasn’t yet been studied, but it’s clear that the word “elite” successfully became associated also with kiosks. And journalists, without thinking long and hard, began circulating the pairing of these words.

Of course, it’s understandable that journalists who think long and hard are not the main “weapon” of TV stations. Their main strength are the journalists who resound with pathetic words and overtones, who even when they’re reporting important news to the public hide it so conscientiously and diligently in the entire news stream that the viewer quickly forgets what was said.