When It Comes to TV in Armenia, God Gave and Didn’t Spare 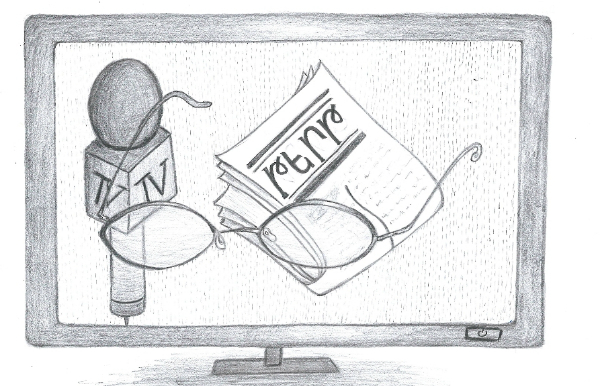 I don’t know how people watch TV in other countries but I’ve noticed that people watching TV in Armenia tend to use the remote control more than is necessary. And the main reason for this isn’t that our TV programs are uninteresting — it’s that we have too many channels. Compared to the size of our population, of course. At the same time, however, I’m not saying doesn’t mean that our TV programs are interesting. I just want to say that for a country of three million, three or four channels is more than enough. Perhaps then the programs would be more interesting — not to mention the soap operas. And the news programs. And the regional and other programs. The same could be said about the newspapers and magazines.

In terms of quantity, it would be sufficient for a huge country, though if we combine the print run of all these print publications it would barely add up to the print run of one respectable paper. The same might be said about the number of journalists in our country. We talk a lot of our Caucasian and Asian way of thinking, but it’s an obvious fact that we have more female than male journalists in our country — more than even in the most developed European countries. The reasons for this, of course, haven’t yet been studied or uncovered, but doing this is by no means a thankless job. We will try to do this work if, of course, we can penetrate the depths of this phenomenon. Over time, of course.

Continuing this theme of “too much,” we can also mention the abundance of our sites, but understanding that even without this my remarks are quite contentious — I want to hold back by suppressing my enthusiasm, especially if we talk about democracy and jobs.

Nevertheless, no matter how much we restrain ourselves, speaking about that which is “too much” we can’t not draw our attention to the abundance of our soap operas. It’s regrettable, of course, that their great number doesn’t translate to plurality. Our soap operas infused with criminal activity, like twins, are like one another, and though our life also contains its share of criminal activity, however, the soap operas offered to us on different channels several times a day differ greatly from the life we live. Unfortunately, all that is positive in these soap operas is tied purely to jobs and salaries. Nevertheless, I’m happy that a huge army of directors, screenwriters and especially actors earns a living due to these soap operas and today are capable of more sacred roles.

Let’s now be content with this pretentious and unpredictable claim of ours: unpredictable in the sense that I myself don’t know in which direction I’ll be guiding my attention and thoughts. I know only one thing: there’s always the danger of superficiality because I too am one of those who doesn’t watch television so much as operate the remote control. And instead of reading the paper, they simply flip the pages. And they’re not thinking about the reasons for this right now. But they understand that, nevertheless, they should think about the reasons. They also understand that, in any case, something should be changed — for the better, of course. But at the same time they also understand that it’s very easy to dole out advice. And, knowing this, they give advice anyway. And they’re inclined to continue doing so.