The Hidden Charm of Surnames 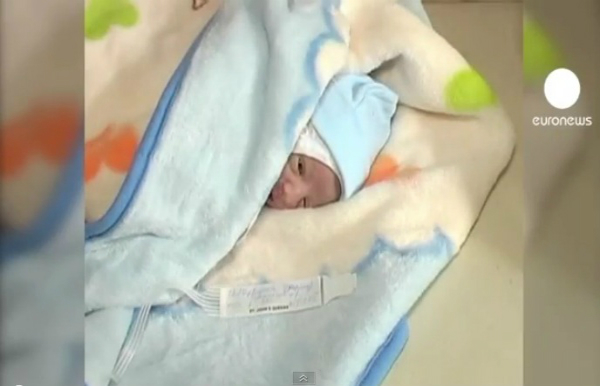 Two surprising things happened in Armenia recently: news about a fan club of another country’s prime minister was announced and baby Sarkozy was born.

The prime minister is Vladimir Putin, who is preparing (in fact, he’s already prepared) to become Russia’s next president, while Sarkozy is a newborn baby in Gyumri, whose parents bestowed this odd name upon him motivated by gratitude (the French president is ready to sign a bill that will criminalize denial of the Armenian Genocide in the country).

These two events were widely covered by the local media, and the feedback was so great that one could write a scientific research paper on how Armenia communicates with foreign countries through the use of family names.

News about Sarkozy Avetisyan was reported exclusively by all local news outlets and online users. Euronews even prepared a special report (“Baby Sarkozy was born in Armenia”), where shown was the newborn, his parents, the maternity hospital and the city of Gyumri, and it was noted that Armenia’s ruling party gave the newborn’s family a gift of $200. Then this news was smoothly tied to the bill approved by the French Senate and as a balance to the Armenian emphasis, shown also was Turkey’s response (though the lips of players of the online game “Slap Sarkozy”).

This report drew attention by its extreme appropriateness (it was merely the facts, nothing more). But the fact was more vivid and influential than multilateral comments. Confirmation of this fact had a great deal of irony in it. The incident occurred (the Senate bill) and the reaction immediately followed (the second time the last name was used).

Actually, no one urged the Armenian father to give his son such a cacophonous name — it was solely his personal desire to do so. The same in the case of the Putin fan club. It was recently announced that the Putin fan club is an “initiative of Armenia’s youth,” that we (or our children) wanted to have such a club, since “nationalizing Putin’s ideas” is very timely for the Republic of Armenia.

Such “light” and so-called secondary (mediated) news often appears in the local newsfeed. They are beneficial, opportune and influential, and it’s due to such news that a background to emphasize the main news is created. Such news are born organically and are often more striking than the cause for genuine news (in this case, the French law and the Russian president’s election campaign).

Such news say more about us than the newsfeed that preaches, since in both cases the domestic reaction is more current than the actual fact. Especially when the reaction is only a conjuncture.

We appear opportunistic, but perhaps this can be treated only with irony.

That’s the law of life: if you don’t have the inner strength to resist challenges, you are forced to apply the creative approach, which fits in quite well with the logic of absurd initiatives. If it turns out, absurdity begins to retreat, disseminate explanations and become justified.

As happened in the case of the Putin club — which denies and defends itself against the information that the club itself gave birth to as a response.

Projects full of hot air very quickly reveal their nature when they become too inflated. They simply burst when the media community applies a creative alternative — by using “dark forces,” “Russified Eagles” (drawing parallels with a local patriotic organization called Armenian Eagles), and other vague terms.

Perhaps a family can be found in Armenia that will call its son Putin and a few days later, as a form of unique protest, will conduct a demonstrative name change — giving the child the traditional (and heroic) Armenian names of Aram, Tigram or Andranik.