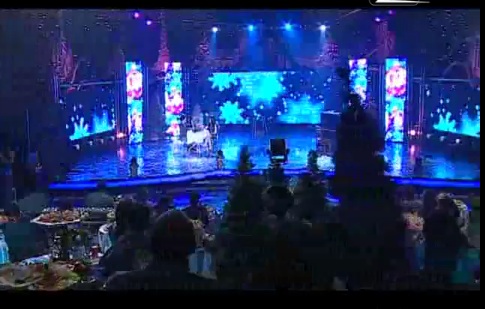 During the New Year’s holidays and festivities, the television always becomes timely. It’s tradition. We sit around the table with friends and family, eat, drink, talk, but out of the corner of our eye we’re following what’s happening on the TV screen.

And as a rule, the television monitor is doing the same thing: singing, dancing, entertaining us with more fervor, more fake enthusiasm and with more empty words as compared to other days of the year.

Of course, the NYE televised broadcasts have stopped being the important component of the holidays, but few find the strength to keep the tube turned off. The Soviet years domesticated Armenians to the “blue screen,” which was the only link to the outside world, while during the years of independence this habit was strengthened.

The NYE holidays with their carefree joy, and the internalized coercion to drink and eat till you’re stuffed and rejoice till you’re full remind one of the school graduation ceremony “Last Call”. In the case of both, the bell is rung for the last time, heralding the end of an old life and the beginning of a new page. And during both ceremonies, a formula of really barbaric joy is applied.

To be happy till the end; that is, shout formidably, don’t take your hand off the car horn, dance wild tribal dances in the street, alight small bombs under the feet of passers-by. In short, show everyone that we with our hard and humble work have earned the right to be unashamedly and wholeheartedly happy. Everything, of course, is bad (prices are going up, emigration, the utility bills are killing us), but since a holiday is a sacred thing, nothing should get in the way of us rejoicing.

You might have noticed that during both festivities, control is lessened: drivers are allowed to drive in not completely sober states, singers aren’t reproached for lip-syncing, police are more well-disposed toward offenders, while neighbors and even strangers are obliged to be tolerant toward loud music and the cries of people partying late at night.

During the NYE holidays, the television operates according to a similar internal logic. It serves the holiday airwaves the same way waiters serve those sitting around the festive table at a restaurant. The TV menu has long acquired the restaurant (music and toast) format. And as a rule, the best musical comedy troupes throw themselves into their work during these last few days of December, to serve not-so-pretentious and not-so-sober audiences (if you try to watch the NYE broadcasts while sober, you’ll have a stroke).

Domestic television understands very well that it doesn’t need to do more (ideologically) and prefers to economize (practically).

There was a time when all our TV channels prepared for the NYE broadcasts in advance — filming their “congratulations” broadcasts at the start of fall.

These broadcasts almost didn’t differ from each other, the same singers and actor-hosts wandered from one channel to the next, singing the same songs and saying the same joyous remarks, but those broadcasts, at the end of the day, were prepared.

But now the channels operate extemporaneously, creating the holiday broadcasts the same way corporate gatherings are organized. In any TV station’s studio, sitting around the tables are people (mainly the trademark faces of that station, well-known invited guests or participants of their own projects) and… everything happens in “restaurant format.”

TV station owners found an easier and cheaper way of filling the holiday airwaves, which, by the way, was the now-defunct ALM TV’s “know how.” We sing, we dance and we also rejoice: This quite frank, naïve and, in that naïveté, influential approach of ALM TV owner Tigran Karapetich’s became a landmark for all the stations.

There is no need to find fault with NYE broadcasts (the films repeat, the singers are a bore, and the happiness is artificial) — in truth, holiday broadcasts, play a very important role. They compress barbaric addictions and show us that which normally isn’t acceptable to put on display (drunk, wanting to revel, listener of rabiz music, provincial matrix). Just remember what noble words stars of the third type, semi-literate hosts and optimists of varying levels begin to say, and you will be convinced that the concentration of any situation becomes a farce. But a farce is a healing agent.

New Year’s is a beautiful holiday. There’s snow, fresh air, delicious and relaxing days, contact with people, and an anticipation of being refreshed. And in this list the New Year’s Eve broadcasts play an anti-viral role.