Contrasts on the Russian Television Screen 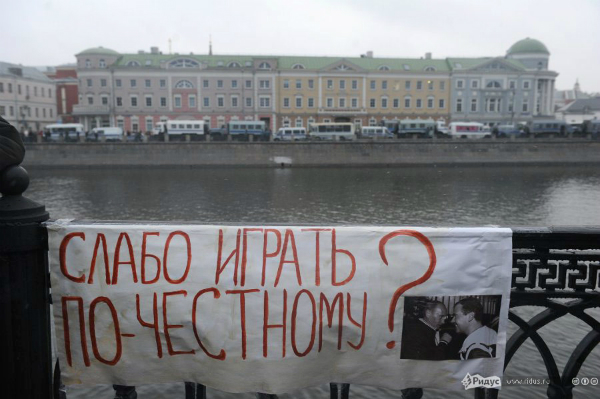 Every journalist gets busy and tense and begins to work gladly when something important is happening around her, when there’s something stirring. A lethargic and stagnant life kills a journalist (as well as her employer, the news agency) because during that time, she’s forced not to react to life, but to invent news — as a result of which she mainly invents banality or, like a parrot, becomes an “unbiased” transmitter of solely the official point of view.

Developments in Russia following the State Duma elections created an almost ideal working environment for journalists, since an overwhelming majority of citizens questioned the official viewpoint and the ruling political party’s “overwhelming” victory, and different, small, but very specific stories began (alerts about violations, incidents of pressuring and arresting those with opposition views, the calling in of special forces, and blockading downtown Moscow).

No longer was there the need to invent or stage news; it was enough only to quickly show what happened, and with that to satisfy both the profession’s thirst and the audience’s demand.

Real life invaded news, but not television. Russian TV was silent for a long time on not only witness testimonies of electoral fraud, but also the thousands-strong protest demonstrations. As if nothing out of the ordinary was happening. News broadcasters with ironclad expressions on their faces continued to echo calm, predictable and “patriotic” propagandistic reports.

In order to get a picture of Russia post-elections, it was necessary to search online where one could find first-hand information (that is, the facts). And then compare that fact with the silent TV screen. Without this silence, the truth wouldn’t be complete.

It can even be said that it was due to this silence that the revolt in Russia became intensified (don’t think we’re stupid). The headlines were so illogical and in contrast to what was happening that they became an incentive and prompted people to be concerned about not only the votes, but also the fate of the country.

More than reasonably complying and constantly setting records in the pace of that complying, a few major and “responsible” state waves reached their logical end: people abhorred them.

Generally bare and unsubstantiated propaganda has its limits, which once reached, can not only no longer convince viewers, but also leave them indifferent.

United Russia’s parallel reality had become “another Russia” where the ruling party were not making ecstatic remarks and saying thank you’s, but were placing blame. The reality and its portrayal cannot be so different (in this case, mutually incompatible) — that’s dangerous firstly for the portrayer. That is, the TV reporter.

When a journalist’s profession is depreciated, and he is forced to explain the reason for his silence, this is likened to justification (I wasn’t talking them because they didn’t allow me; now they allowed me a little bit and so I’m talking a little bit). But a journalist who justifies is not a journalist.

And when the mass of people disgruntled with the election results finally appeared on state television after a delay of a few days, it was already clear that life had managed to shock the airwaves. Initially, the HTB journalist refused to host the news program since a report on the rally hadn’t yet been included, and then other channels began to “wake up” (or at least, partially open their eyes).

The protest in Moscow’s Bolotnaya (“Swamp”) Square was covered broadly and quite shrewdly by this point by all the channels. It seems that to absolutely show the gathering and emphasize that it was “an expression of democracy” was ordered from above. By the way, the Russian authorities had sanctioned the rally in Bolotnaya Square perhaps because of its name (know your place).

If there wasn’t the alternative funnel to the news, the Internet, viewers would get the impression that people were protesting not electoral fraud and the impunity of rulers, but, fighting in the name of free and fair elections, were celebrating United Russia’s victory. It turned out that the ruling authorities and the demonstrators wanted the same thing. And of course, no TV channel had slipped the “Russia without Putin” slogan.

Speaking about Russia, all of us naturally are referring to Armenia in our minds. Our channels have not only the same owners (the controlling hand is at the president’s office), but also the same tactics. They censor life then justify why they lie. Or they don’t justify, safely hiding among the screws of the ruling propaganda machine.