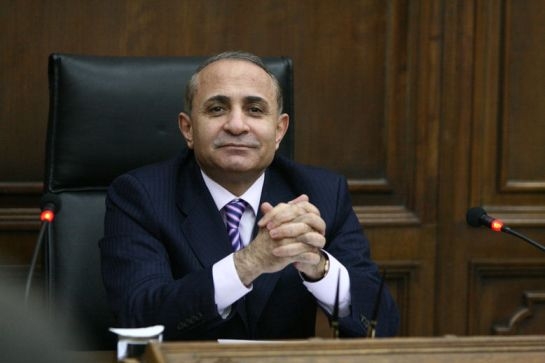 My brother called. He had technical problems with accessing the Internet and couldn’t check news of Armenian National Assembly Chair Hovik Abrahamyan’s resignation. Online news media had reported on the parliamentary speaker’s resignation, also including the Republican Party of Armenia press spokesperson’s statement.

It was already past 11:30 pm. The match with Barcelona in the Champions League was on when my colleague, Artur Papyan, wrote to me on Google Chat, asking if I’d seen news of Hovik Abrahamyan’s resignation on television.

I flipped through the channels: football, a bunch of movies, soap operas, music… I finally saw news of Abrahamyan’s resignation on the ArmNews news ticker. Still not bad. A news ticker is salvation, it seems.

The evening news broadcasts are aired between 8:30 pm and 10 pm. The news about Abrahamyan was received when it was the programming slot for soap operas. In theory, it’s only H2’s Lraber (“Messenger”) that broadcasts news at 11 pm and could’ve reported the resignation of the country’s second official in the past week.

More or less, the work of TV news desks is not adapted to emergency situations, while online news media are strictly competing with one another and in many cases are on duty round-the-clock.

If a newspaper or online news reporter can wait for hours for the end of the ruling Republican Party of Armenia executive meeting and report the news of the parliamentary speaker to its readers, why can’t TV reporters do the same?

P.S. I published this article when HayLur began its broadcast at 2:15 pm — and no mention of Hovik Abrahamyan’s resignation…