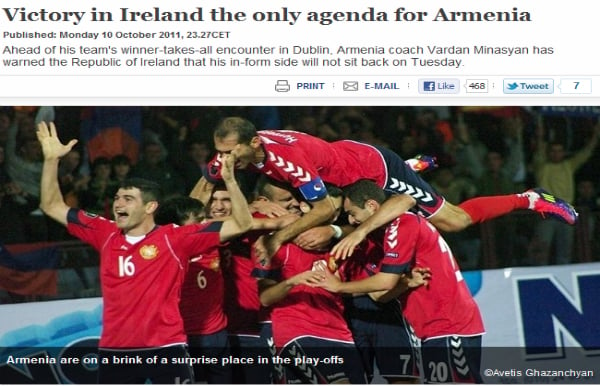 Football dominated and continues to dominate Armenian media ahead of and especially after the Armenian national football team’s Euro 2012 qualifying match against the former Yugoslav Republic of Macedonia.

The inspirational videos with the slogan “We believe…” are constantly on air and all of the teams’ 21 goals can be viewed at different times of the day on various TV channels.

It didn’t take long for online media to understand that the more articles published on football, the more site visitors and higher the rating.

And in social networks, the topic of football wins hands down: mash-up posters, updated news and discussions on the upcoming Armenia-Ireland match abound. Football fans upload more and more videos of the Armenian team’s goals and matches on YouTube.

On Oct. 10, preparing a reportage on football for the main broadcast on the program Haylur on Oct. 10 was Artur Grigoryan, who is better known for covering topics related to Armenia-Turkey relations and the Nagorno-Karabakh conflict. And so it seems that these days at least, football is on par with politics on public television when it comes to significance for local audiences.

I, as a media consumer and a football enthusiast, more so search for European and Russian feedback on Armenian players’ games. Not only because it’s interesting to hear what others have to say about your country, but also because analytical broadcasts and discussions are missing somewhat in local media during these days of football.

All are enraptured and waiting for victory. But the analysis of errors in the match with Macedonia, information about the tactics of the Irish team, the real assessments of Armenia’s possibilities — these are somewhat lacking. In this sense, for example, this piece by The Guardian gave me great joy.

Overall, football in Armenia is developing, and naturally, it becomes a subject that dominates the press. Let’s wait for the new generation of football commentators.