When There’s Nothing to Say, Talk A Lot 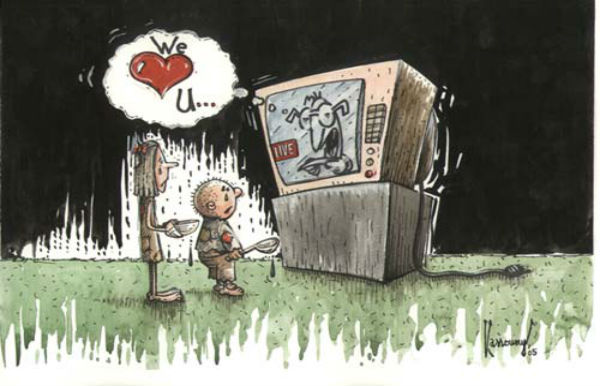 “Dear viewers, it’s very difficult to find the words to describe the situation, but it’s all right, I’ll do that for you. Leave this difficult work up to me, and I will find the words…” Recently this is how an Armenian sports commentator described the nature of his work, commenting on a highly rated football match on public television.

Actually, this commentator succeeded in generating a real downpour of words and, without pausing and being breathless (which perhaps was supposed to have meant that he did his work with great devotion and professionalism), saturated the scene with heaps of words. Working with the same approach are those television spokespersons who try to comment on a contest or simply speak with guests in the studio.

Those who traditionally watch locally produced television undoubtedly would have noticed that the work of creating (making up, inventing) words happens quite frequently in Armenia. And it doesn’t matter what they’re talking to us about onscreen — what’s become important is speaking a lot, while at the same time saying nothing at all.

If we put aside the format of providing news, with its preaching, imposing Soviet-type emphasis, and watch all the other broadcasts, then we would be convinced that Armenian television has only one goal: to wear out viewers, to muddle sentences and rearrange remarks so much so that the viewer is exhausted, and in this state of exhaustion, to inertly watch the blue screen where glamorous people are talking nonsense.

An overly made-up girl, for example, recently speaking with her guest, a famous actress, said, ohhh, when I watched your performance, the name of which I don’t remember, I think the title was comprised of two words, oh! I remember, and when I was studying at the theater institute, yes, I studied and I am an actress, I was left with a very good impression, I want to say, that I think, it was a great performance.

[[wysiwyg_imageupload:110:]]This entire program was taken up by this meaningless monologue, in which even the guest couldn’t interfere, since the girl who wanted to appear that she felt at ease was constantly interrupting her.

If we aren’t too lazy and actually jot down the remarks of these TV hosts and then publish them unedited in any newspaper, we would definitely get a kick out of it. And a good occasion to laugh.

In reality, this approach (nonsense delivered with a smile) had its start in the unwritten, but clearly operating rules of show business. The show must go on without pauses, and so there’s no need to take a breath or think a little bit about what you’re going to say. It can even be said like this: you can die, but don’t take a break.

And the glamorous girls and elegant boys on screen try to establish themselves in this way, through talking incessantly. In order to leave an unconstrained and fashionable impression, all our onscreen hosts are prepared to find words instead of us and for us for hours, and since their vocabulary is quite meagre, they fill that gap with a fast pace. They talk faster and more, and we get tired quickly and become exhausted.

Armenian television in reality doesn’t have much to offer us: we find the news, more current and unedited, online; films and concerts, likewise. And documentaries or urgent reportages — well, it’s been a while since we saw these on television.

The main things to watch then are sports matches and contests, which we are forced to watch guided by self-loving commentators’ pseudo-dynamic manner of speaking. I have many friends who, for example, watch football matches with the sound off, saying this is how they try to defend themselves against the onset of nonsense.