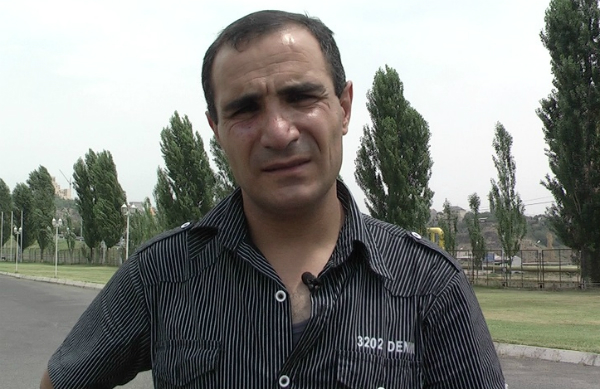 Yesterday I was watching the news on Armenia TV. Launching into the ongoing story of the Sept. 23 gang bust in Yerevan, the news anchor first presented the news according to notorious local photojournalist Gagik Shamshyan: the photojournalist informs viewers that the group members, their heads covered, were brought to the courtroom; they will be imprisoned for two months. Then the video provided by police was broadcast (see below, video in Armenian only) with Shamshyan’s remarks — and quite impressionable too. Why they recalled Shamshyan remained a mystery.

Generally hearing the same name on news broadcasts you unwittingly think, ok, now why do television companies have their own editors and journalists then? If the channel was interested in the images of car accidents shot by Shamshyan, why don’t they assign their own reporters to the task; why don’t they require them to work more effectively, more efficiently?

Gagik Shamshyan’s photos, videos and sometimes articles appear on news broadcasts of two television stations, on the Internet and in the print media — they are mainly about car accidents. But the general tendency is that in confronting injustice, people look for Shamshyan’s phone number. The most recent example is the story of a teacher shaving students’ hair as a form of punishment, which was filmed by Gagik Shamshyan. The fact that the parent did not contact the television station or one of a plethora of online news sites that disseminate Shamshyan’s material is indicative of this phenomenon. She contacted Shamshyan directly. It turns out people more so trust an individual, recognized journalist than a news agency.

I have two conclusions connected to the Shamshyan Phenomenon:

1. People are interested in Gagik Shamshyan’s main subject — automobile accidents — which is natural.

2. More and Gagik Shamshyan reminds me of Hamlet Ghushchyan and his well-known broadcast, when viewers called the TV program for every household problem and expected a solution.