It’s A Soap Opera That We Watch 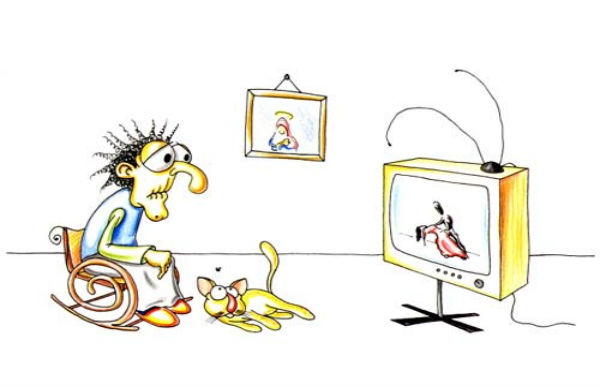 Finally all of us (who had not yet managed to see) saw what we’re watching on television. According to the ratings, I, as an average citizen (I quite correspond to the average: average age, average weight for an Armenian man, and a correspondence with other standards of averageness), watch soap operas day and night. I, like my friends, had doubts, but now it’s been proven with figures — unselfishly, I and my nation watch soap operas. And by the way, only those that are Armenian-produced, not any low-quality production that comes out of Latin America.

Let’s take a deep breath here and make a confession: we all criticize soap operas, but many of us watch those very shows, often secretively. For example, many of us, rapt, watch Doctor House but haughtily look down on common “Anna No. 9” viewers. But let’s not be presumptuous: Gregory House differs from poor Anna probably in terms of the character’s quality, his cane and the amount of Vicodin in his blood, but both have an important attribute — their films have neither an end nor a beginning, while the screenwriters plan each episode to somehow move the show forward. And it is this incessant rhythmic activity that is called a soap opera.

And in this global bourgeois-philistine situation, where profit is at the basis of everything, there’s no easy way to get rid of soap operas. Since they’re quite cheap, even if they’re not a bargain. And the important thing: if suddenly “the job takes” and people begin to watch the show, the soap opera becomes a money-printing machine, since it becomes a rhythmically repeated familial event — at the same time, the same familiar faces, the endless engrossing plot. What else is needed for happiness? In addition, an all-around happiness reigns; all are content, and those who aren’t often haven’t seen that particular soap opera and watch a different show (just as I haven’t seen the enraptured, rating-driven series “Where is my man?” online; instead, I watch Doctor House, considering myself a hostile enemy of soap operas).

When the Soviet Union collapsed, one day an ultimately depressive idea occurred to me: “Basically we’re already condemned to advertising: it’s going to be eternal and see us off until the ceremony of the deliverer’s post-mortem examination” (let me say to the youth that during the Soviet period, there were practically no commercials on TV and it made us very happy when there was). Years passed and I understood that not everything is not that bad — TV programs and films can be watched much more leisurely, making use of the YouTubes and torrents of the world.

And now it’s come to soap operas, or, to be more precise, the formation of television. There is currently no real escape from soap operas; all the same, the mainstream is going to watch them and TV companies are going to produce them. And in this case, it won’t be possible to escape into the Internet, since not watching soap operas doesn’t affect their influence: when those around you are under the spell of the soap opera “The Unembarrassed 3,” you unwittingly become its victim.

It remains only to sit and wait for the day when humanity will move from self-interest to more attractive features. Or when the TV bosses will realize that they are in a way responsible for educating the nation and it is shameful to rhythmically repeat every stupid thing/bash the nation’s heads. Let’s see which will happen first: which will change — the world or the TV bosses of the Republic of Armenia?