Halal and Haram in Media: Are Blogs News Outlets or Not? 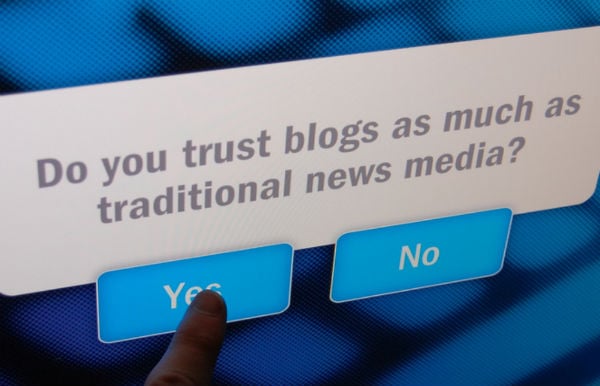 Lately, the question of the relationships between traditional and alternative media has been much discussed among us and among the greater public. One of the main questions is are blogs news outlets or not?

This question, naturally, very much concerns the two parties involved: bloggers, who want to be a player in the field of information, and traditional editors, who are fed up with the newbies.

The indignation of editors can be understood: they spend human, financial and technical resources in order to cover some event or another. And suddenly there appears a semi-ignorant blogger and through an illiterate piece of writing attracts a larger audience. Well, wouldn’t you be indignant?

More so, revolutions, mass influence and the like begin to be attributed to these ignoramuses. After this, begins the second period: the crowds, inspired by alternative media, start to open blogs one after another. If about 5 years ago, people started blogging for their friends, well today many start blogging to become media no. 2. Well, how could you not, if you’re told every day that that’s what you will become?

Then come classes for bloggers. Formal classes. Informal classes. Secret. Underground. Onto the third stage: Whoever doesn’t have a blog, or at least a Facebook account, doesn’t leave the impression of a serious person. But this stage doesn’t have anything to do with the article, so let’s return to the previous two stages.

Truly, an issue arises. A hypothetical ignorant person can affect the (let me say, again hypothetical) work of a large group of competent journalists. And so it is and it will be, since the reality has changed. It’s already too late to try to ask the media field be assessed with last century’s standards. The Internet exists and how — what with blogs and social networking sites.

Editors who have understood this have already, both they and their news agencies, started blogs. Whatever happens, it’s the same, mass media is stronger. Bloggers win only in the first round — by being faster. Then come those news agencies that can work with alternative media, while coming in last place are those media outlets that still attempt to remain solely traditional — and most often they aren’t even noticed.

But the truth is that the Internet has changed everything. In media are bloggers, Facebook-ites, Tumbler-ites, but one value in the field of information has remained stable: being a reliable source. It’s just that now bloggers can also be such a source. In 1943, that could’ve been the partisan leaflet; in the 70s, the samizdat printed book; in ’88, the poster hung up in the Opera. What is trustworthy is halal.