The Pain of Ratings and Worn-Out Newspapers 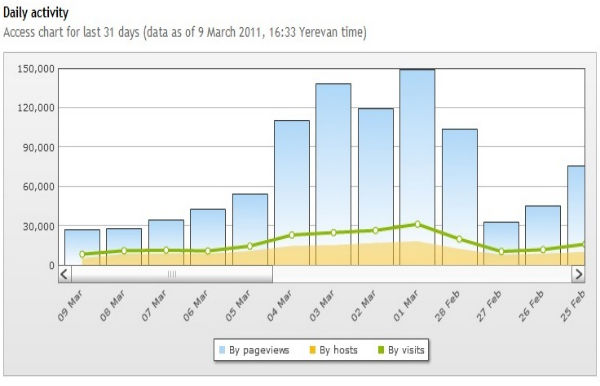 In Armenia right now we’re experiencing a transition period: the traditional press I wouldn’t say is dying, but is seriously conceding its position to online media. Television, through its traditional form of broadcasting, is gradually losing its traditional viewer, who is gradually moving away toward YouTube or additional cable internet service packages. Radio, as the most flexible, is quickly moving toward a symbiotic connection with the internet. News agencies are unwillingly appearing online. Perhaps many people didn’t manage to catch that moment of transition.

As for newspapers… The question of newspapers is even more serious. In the current state, readers of print papers are mainly comprised of three types of people:

This is the reason why whichever publications can manage hastily move to the internet. Being online doesn’t mean having a website for your newspaper. Being online today also means being on Facebook. If you’re not on Facebook today, then you generally don’t exist. Tomorrow, they’ll say the same thing about Twitter. And to those who say otherwise, they’ll call them backward, illiterate and even, not wanting.

But that’s still not much. By getting online, newspapers understand that here they can have even more readers than in the offline world. And that makes editors happy. But only until they come across the dark side of the internet: so-called ratings.

The online news agency today can work how it wants, write what it wants, not publish necessary content for readers, but have the most important thing: ratings.

A strange law operates in the internet: whichever sites pulls in and brings in more people is good. At the very least the website staff and a number of other irresponsible people think and will continue to think like this.

Moreover, the ‘rating-pain’ in the internet has a much bigger foundation, since for a news agency it becomes the main meaning of life. Let’s look at print media. Here it’s clear that the rating is the print run — there isn’t a better way to count this. In Armenia, everyone knows that the print run, which is noted on the newspaper itself, shouldn’t lead to confidence for Armenian intellectuals. But even if we take the actual sales figures as a basis, it’s all the same, for an Armenian newspaper that’s not mainly considered a criterion. The print run is a criterion for neither the publication nor the reader, and not even for a rival publication. Since, in fact, there’s almost no competition among newspapers in Armenia: every publication has found its niche. Each one has its financial sources. While the internet, even the most financed website, is unwillingly thrust into the competitive arena, since its position becomes visible compared to other sites.

And what’s interesting? It turns out that however much traditional media is criticized, it’s the ancient Armenian newspapers that maintain the main rules of ethics online. Among the number of news agencies online today, it’s newspapers’ sites that haven’t given into the ‘rating-pain.’ Thus, it’s not always that the traditional is bad in a new environment.