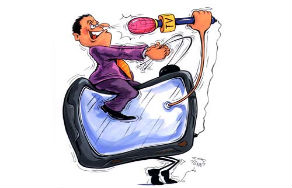 An opinion has been going around that the “guilty” party in recent lawsuits against news outlets was the 2010 legislative amendments, or, to put it more accurately, the decriminalization of libel and slander. And, as if, if that didn’t happen, the fines against media wouldn’t be as strict and, generally, there wouldn’t be so many lawsuits.

We can agree with those who express such points of view on only one issue; that is, after decriminalization, lawsuits increased, because entering court with a civil suit is easier than launching a criminal lawsuit (moreover, we forewarned about such developments during discussion of the bill). However, that fines and other punishments are being applied to news outlets, the “guilt” of the laws that made amendments to the Criminal and Civil Codes cannot be considered to be fully proven.

Let me explain with an example: in 2009, when these amendments weren’t yet made and and the concept of compensation for moral damages wasn’t yet defined, the Court of General Jurisdiction of Kentron (Center) and Nork Marash Administrative Districts of Yerevan sustained Robert Kocharian’s son Levon Kocharian’s suit against local daily Haykakan Jamanak (“Armenian Times”) and obliged the newspaper to pay 3 million 620 thousand Armenian drams (about $9,918 US) in compensation (the plaintiff had asked for 16 million 200 thousand drams, or about $44,384 US). Later, the appeals court reduced this amount by 620 thousand (about $1,700 US). But this doesn’t change the essence of the ruling. They mandated the paper to pay — calculated through what means it’s not known — in truth, a random amount. The amount, by the way, was greater than the maximum (2 million drams, or about $5,479 US) that the court can set after the amendments were made to the Civil Code.

This one example is enough to show that if the authorities really want to punish any news outlet, then it’s not important through which Code or article of which law they’ll do that. For them, it’s important to reach their goal of prompting a warning to and intimidating journalists. And any ruling they’ll receive does not present any difficulties for the authorities and oligarchs, since in Armenia, the judicial system, unfortunately, is not yet independent; moreover, it is completely dependent on the other two wings of government (and not only those).

And if the judicial system was independent and didn’t have this issue of unconditionally punishing journalists and news outlets, then, based on the law, it should have denied the majority of lawsuits. Take, for example, the three notorious oligarch MPs’ lawsuit against the same Haykakan Jamanak. It’s true, the paper had not provided sources in the first piece which became grounds for the suit; however, later it had provided its source, Moscow’s Unity club manager Smbad Karakhanyan. Moreover, the latter had stated a few times that he’s responsible for the statements. If the court didn’t comment arbitrarily on the corresponding provision in the Civil Code, it should’ve denied the lawsuit. But because it wanted to punish the paper once again, it approved the ruling to pay each plaintiff a compensation of over 2 million drams.

This and other lawsuits could’ve been denied as well, based on the precedents of the European Court of Human Rights (for example, in the cases of Lingens and Oberschlick). According to these precedents, “the limits of permissible criticism are wider as regards a politician as such than as regards a private individual. A politician inevitably and knowingly lays himself open to close scrutiny of his every word and deed by both journalists and the public at large, and he must display a greater degree of tolerance.”

Meanwhile, Armenia’s public figures (politicians of different calibers and other individuals under public scrutiny) don’t tolerate any criticism or any, even insignificant, information about their lives. And since they’re confident of achieving victory in court, instead of applying the more unlawful methods of persecuting news outlets in the past (assault, setting their cars on fire, restricting a paper’s circulation and so on), they’ve begun to “rely on” the law and the courts. And, well, the court, as we noted above, never “disappoints” those who launch lawsuits against the media.