New Models for Civic Engagement in a New Information Landscape 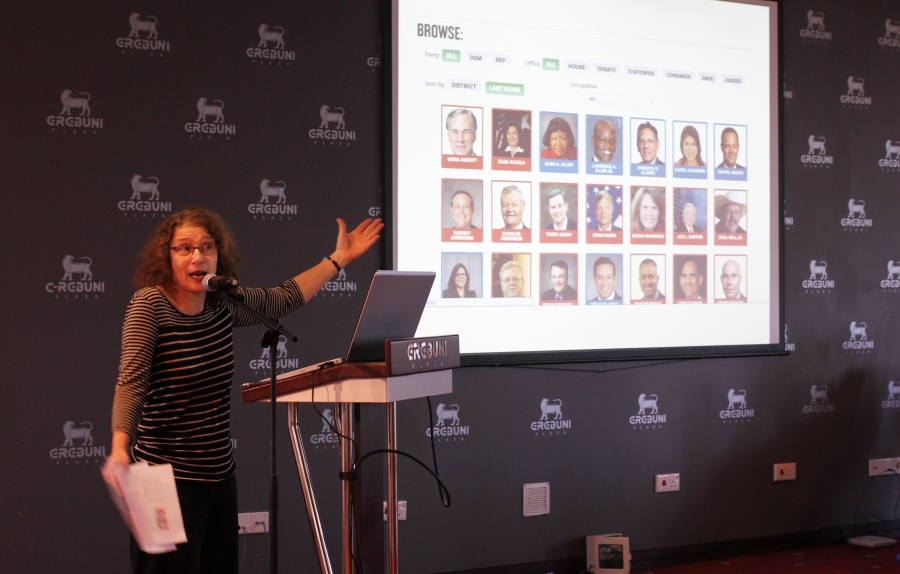 Of all the surprising statistics that emerged from last month’s US presidential election, one jumps out. Over 100 million eligible voters, almost 47 percent of the electorate, didn’t vote, the lowest turnout in in 20 years. As the country prepares to pursue radically different policies, it is with the knowledge that almost half its voting public sat on the sidelines.

One can speculate about the reasons. Perhaps they were disillusioned with the system, or no longer believe they have a meaningful voice in public affairs. But when that many people choose not to exercise one of democracy’s most fundamental rights, it‘s the symptom of a larger problem.

This conference is about investigative journalism, the watchdog role a free media plays and speaking truth to power. But for the extraordinary risks investigative journalists take to discover these truths to have meaning and make government and corporations accountable, the public needs to trust their findings and feel they can act on the information. Today in my country and perhaps in yours, there is less trust in the news media than in previous decades and growing doubts about its credibility.

The recent election revealed the US media’s blind spots, and the work we need to do. It also exposed structural weaknesses. One of the best analyses of the US media’s performance in the recent election and the challenges ahead is by Joshua Benton, who heads the Neiman Lab at Harvard University (he is also a former Fellow of the International Reporting Project, where I was deputy director.)

Benton predicts the forces that drove the US media’s failures this past November are likely to get worse. Among the many factors he cites, including the increase in fake news and the limited perspective of social media echo chambers, is the loss of local news organizations, what he calls the “community backbone.” Partly due to the economics of the digital era the, US news media has consolidated in New York, Los Angeles, and Washington D.C., and has been hollowed out in the middle of the country.

This new information landscape requires new approaches. Journalists will need to find new ways to build relationships with diverse communities and harness the capabilities of a networked world to empower citizens, strengthen civic life, and encourage productive civic discourse beyond the “Shares” and “Likes” of social media.

I have been studying new models for civic engagement within and outside of the world of journalism that reimagine the role of journalists in civic life, and transform news audiences from passive onlookers to active participants in information gathering. These approaches allow the public to experience for themselves the power of facts and building a case based on evidence by involving them in reporting on issues they care about. The people who have designed these models don’t expect participants to take on the world. They ask them to do one small thing, and acknowledge their contribution.

WDET, a small public radio station in Detroit housed at Wayne State University, invited listeners to participate in a Detroit Park Watch, to report their observations on community park maintenance after the city emerged from bankruptcy. They created a map where local citizens could report maintenance issues, showing their contributions along with city and journalist-reported observations. With this much larger data set, WDET was able to show that 32 percent of park lands were not being maintained, a statistic that focused the community’s efforts for government action.

ProPublica, one of the US’s premier non-profit investigative news organizations, has pursued this model of open investigative journalism in some instances. One project asked members of the public for their experiences getting hurricane relief funds from the Red Cross after that organization refused to reveal the information. ProPublica created a secure digital drop box for documents.
Another intriguing model grew out of an audience engagement experiment at WBEZ, Chicago’s public radio station. Their Curious City digital platform and framework solicits, sorts and manages audience questions. It asks listeners what questions they have about life in Chicago and does stories to find the answers, involving audience members along the way.

One of Curious City’s founders, went on to co-found Hearken, a company that offers similar tools to newsrooms globally to help the audience participate in the story production process, with a sliding pricing structure so that even very small newsrooms can participate. Hearken tools are now used in 60 newsrooms on five continents.

Sponsoring live forums and events provide another opportunity for news organizations to build deeply layered relationships with the public and become catalysts for productive civic discourse. They can also be profitable.
The Texas Tribune, a small non-profit news organization in Austin, Texas that has earned a national reputation, has created a dynamic synergy between its live events and online journalism as part of its business model. Often partnering with colleges and universities throughout the state, the Tribune creates invites politicians to appear at live forums to discuss local issues and answer the public’s questions.  In doing so, it also introduces new audiences to its online content which the events also generate, creating a productive feedback loop.
But these transformative models face constraints. As Facebook and Google devour the lion’s share of advertising revenues, most local news organizations in the US have been shrinking. According to Tom Rosenstiel, executive director of the American Press Institute, the number of journalists working in newspaper newsrooms in recent years has dropped by over 35 percent without growth in other local media to compensate, and the hemorrhaging in smaller communities continues. Many newsrooms lack the capacity to answer complicated questions that require collecting or creating large data sets, especially when there is no reliable official data.

To address this predicament, I explored disciplines outside the world of journalism to see what they might offer. My search led me to the field of citizen science, a growing global movement that sees public engagement and citizen empowerment as one of its cornerstones. Established in 2014, the new Citizen Science Association now has 5000 members in 81 countries. There is also a European Citizen Science Association. Guided by scientists, many hundreds of thousands of citizens have participated in collecting, reporting or analyzing information to answer research questions, many of which address societal problems and challenges. Their work has led to the development of new digital tools and techniques to collect and sort big data, and to ensure data quality.

Their methods have made their way into government. The European Union has spend 50 million euros on five Citizen Observatories that monitor environmental pollution, biodiversity and marine litter. The US government has also incorporated citizen science into its work. Twenty-five different federal agencies support over 300 citizen science and crowdsourcing projects. In theory, the data they collect is also available to the public.

Another area I have explored is the possibility of collaborations between the media, communities, and academic institutions to address societal challenges that they can’t tackle alone.

In Flint, Michigan, serious problems with lead-poisoned water came to light thanks to an ad hoc coalition of community members, journalists and academics who independently tested and analyzed the water and children’s blood levels, producing strong evidence that challenged flawed state and local data.

In New York, the John Jay College of Criminal Justice and Pace University Law Center enlisted community members in a research project to discover what it is like to grow up policed in New York City. Over the course of several months community members collected over a thousand responses from local residents describing their encounters with the New York Police Department (NYPD), then analyzed the results with university researchers. The resulting data challenged official NYPD accounts and contributed to legal challenges and police reform efforts.

The Accountability Lab is a community-driven incubator model that promotes transparency and accountability and establishes productive feedback loops. It helps young people and journalists create community conversations and actions around the issue of accountability. Local labs work with journalists, university students, filmmakers, and others on topics they choose. In Liberia, for example, they looked at the lack of safe drinking water in one community, and also established a weekly accountability radio call-in show.

In Nepal, after the recent earthquake and with a local journalist’s help, the Lab set up volunteer-run citizens’ help desks to help people fill out forms for disaster relief. That project eventually led to a journalist-run survey in 14 districts to discover whether relief assistance had been effective. The results were disseminated to local radio talk show hosts.

The Lab also created a hit television show “Integrity Idol” in several countries. Members of the public can nominate and vote for their favorite honest government official. In Nepal, the government ignored the project until tens of thousands of people voted and millions watched the program.

These new models hint at how much is possible. And impressive as their results are, something even more important is at work. When they fill out surveys, test their water, and participate in other small actions, each community member is telling his or her own story, contributing to a larger communal narrative that seeks to understand and tackle shared problems. They are building relationships with each other and with the news media, getting to know and hopefully trust each other more. It also boosts participants’ confidence in their ability to take civic action. Various studies have suggested that citizens involved in local civic life are more likely to vote.

In the new information ecosystem, the media’s gatekeeper role is changing. If journalists discover new and better ways to build relationships with the communities they profess to serve, they will gain the public’s trust, and investigative journalism will become an even more potent force.