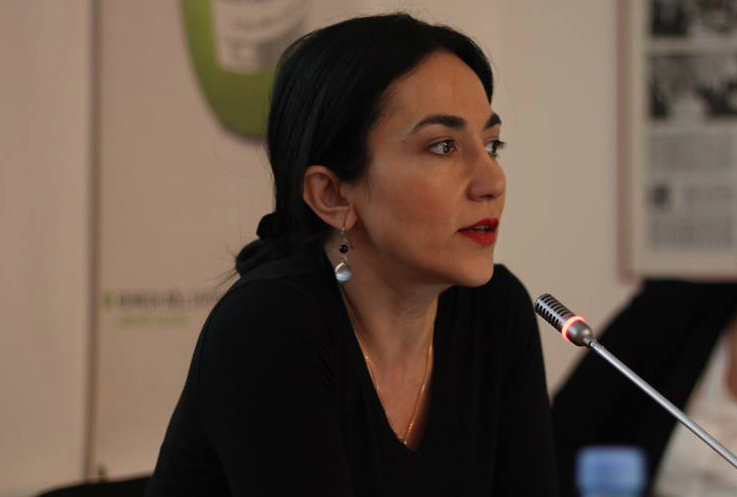 Circulating online a few days ago was Arajin Lratvakan‘s video (I don’t consider Shamshyan a journalist so I won’t include him) and information from several websites that have no grounds to be called news. Ordinary viewers were given the impression of a woman in an unbalanced state, who “entered [the fountains] and is shouting.”

I realized that it’s high time as a reader to purge media outlets and to publish the main features of those who are miles away from a self-respecting journalist. I have one desire: for us citizens to gradually squeeze to the margins media outlets who don’t respect themselves and don’t serve our “public interest.” I am convinced that censorship should be only like this.

“The people who make the news are vulnerable to the impact of our stories. In extreme cases, their lives or their reputations could depend on our reporting,” advises Reuters in its Handbook of Journalism.

Journalism should get rid of people who reflect reality in crooked mirrors, chase after sensations, and spread rapid news, and should do so with the use of the mechanism of public stigma.

No self-respecting editorial staff would ever spread that story in the format in which we saw it that spring evening. If “a woman” was in the fountains as those journalists claimed, presumably far from their editor’s eyes, then why did that have to become public domain?

Those journalists should’ve answered this question for themselves. Any proper journalism program first teaches to determine who that “woman” was, what happened, where, why, and so what for “us citizens”?

It was obvious that the given journalists hadn’t answered the questions “why?” and “so what for us citizens?” lightly and had fallen into the trap of the “what happened?” question. But they had drawn us into this all with them.

Finallly, they subjected another citizen to moral and physical danger. As a result of this, a news organization such as Reuters immediately dismisses the employee, which is explained in its Handbook of Journalism.

“Accuracy always comes first. It’s better to be late than wrong,” writes Reuters in its Handbook of Journalism, adding: “Neither accuracy nor fairness must ever be sacrificed for speed. If we lose our reputation for accuracy and fairness we lose everything.”

In our case, it’s not enough that the media outlets that circulated these materials haven’t explicitly stated their mission or core values. It becomes clear with such articles and videos that they don’t have internal procedures or regulations, so novice or incompetent journalists won’t be caught in various traps or the malevolent won’t set traps for us.

The woman in the fountain days ago had given an interview to one of those media outlets and generally is quite a prominent public figure. A self-respecting journalist couldn’t have not recognized a public person, if of course until now their own stories were devoted to coverage of reality, which was to have served the “public interest.”

Even if they didn’t recognize her (the journalist is a rookie, it happens), then in the case of a media outlet having proper procedures, the first step would’ve been to discuss with experienced journalists the “so what for us citizens?” question.

Here it would become clear that in the case of “a woman” the news simply doesn’t make it on air and that’s it. I hope it’s clear why? And if that woman is a public figure, then the context changes and experienced journalists and the editor decide to investigate the incident and report on the entire chain or drop the story.

In our case, the situation is worse. Naturally, there’s no investigation. Moreover, the story continues to circulate in the media and the media outlet hasn’t apologized to readers and hasn’t made a statement on compensating for moral damages to the individual involved.

And now as a reader, I can assume anything. Including the inconceivable. I have to be grateful that as an optimist, I think that the journalists who released the materials are not competent.

“Our news photography must depict reality. […] As journalists, we have an obligation to convey the reality of what we report accurately, yet a duty to be aware that such material can cause distress, damage the dignity of the individuals concerned or even in some cases so overpower the viewer or reader that a rational understanding of the facts is impaired. We do not sanitise violence, bowdlerise speech or euphemise sex. We should not, however, publish graphic images and details or obscene language gratuitously or with an intention to titillate or to shock,” states Reuters in its Handbook of Journalism.

Again putting Shamshyan aside, what’s seen in the other videos and particularly in some of the photos causes the reader to ask: who needs this? What reality is it trying to convey? Is it important? What about a person’s dignity?

There really is a need to seriously study this problem. But in this particular case it was clear that there was this degrading, stereotypical trend due to the fact of being a woman. Reuters would severely reprimand a journalist for this. If the editor was on hand, no one would ever see that photo. Moreover, in-house training would be organized to avoid such photographs in the future.

“A Reuters journalist shows integrity, impartiality, persistence, accountability and humility when covering people,” writes Reuters in its Handbook of Journalism.

Not a lot is needed. Even under these conditions of permissiveness, when media outlets haven’t declared their professed values, presumably don’t have journalism handbooks and procedures, and because of the market are forced to collect “likes” for advertising, any self-respecting journalist or editor can be the bearer of these values. Essentially, they are honorable qualities that decorate a person, regardless of profession.

And I, as an ordinary reader, have declared for myself my comment on values: “Never consume even the best news of a media outlet outside of these values and ignore journalists who disbelieve these values.” And this is my censorship, which few in our media industry today will grasp. Let them be few, but of good quality.