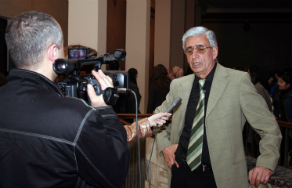 Working for many years in television, I’ve understood that the most important thing is having good professionals.

Television itself is a school. In the years of my youth in Armenia, there was only one channel, and the chances of becoming a professional were tied to jobs. We worked and we learned, and we also taught others.

Professionals of my generation have gone through a lot in filming, for example, major events (such as the 1980 Summer Olympics in Moscow). We studied in professional qualifications courses in Moscow.

Of course, now those studies are not free, but if a TV station really needs professionals, it can pay for their studies and send camera operators, directors, and sound and light directors to learn. After all, by signing a five- or ten-year work contract with them and training them, the station will be assured that it will have a supply of professionals.

Digitization had not only a positive, but also a negative impact on television. Gradually the dramaturgy of the frame was lost, since the technology began to do everything for you. Setting up the frame (with lighting and composition) is an action that a computer program does smoothly and superficially, whereas humans can convey depth.

People give life to the frame. Parajanov’s The Color of Pomegranates, for example, for me is not a film, but an art canvas. It was such an innovative approach that many filmmakers began to imitate Parajanov, as they could no longer do better than that.

And now, the films shot in Armenia are those in which the audience, after watching them, becomes disgusted with life. Yes, often this is the impression one gets.

I think, Armenia, which, with its dimensions, can be compared to a small suburb of a major metropolis, simply cannot have 18 television channels — especially considering that apart from the Armenian channels, we have the option of watching a hundred other, international channels.

We have lost the best period of our television, when it was possible to talk about life, to educate children…

Our [Armenian] television has almost no programs for children. I’m currently preparing a children’s musical program at Kentron TV. Perhaps I’ll do another program later, but for me now, contact with children is important — in order to understand what sort of potential we have.

Of course we need a lot of youth television programs, but it’s more important to understand what can bring children to the TV screen. After all, everyone now gets information from their computers.

Perhaps we have to film an interesting school series, where children will see their friends, teachers, and their problems. But that requires a lot of work, since our soap opera and drama scripts are now written on the go and our actors read their lines for the first time a few hours before filming (say, while taking public transportation).

Once Khoren Abrahamyan told me that acting can save any (even very bad) film or performance, since it’s due to the actor that the viewer believes the fictional reality. And it’s not surprising that watching Armenian soap operas and dramas today, you understand that the actor’s only problem is not inventing a role, but remembering his lines.

And let’s not even talk about how poor the camera work and the lighting is. For example, to create the illusion of a dark room in the scene, they simply shut off the lights. How to explain that you won’t get the effect of darkness like that, that it likewise requires scrupulous work?

These past few years, technological development was so flighty that now a certain pause is noticeable. There won’t be the need to wield new technological skills for a long time (what we have is more than enough for us); now we need to tackle the issue of using what we have professionally. And these issues are always the same in television — editing literacy, the dramaturgy of the frame…