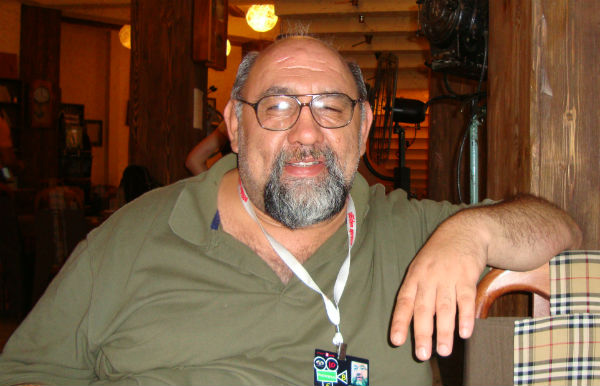 The more new technologies develop, the more they lead to questions on the quality and meaning of art. During the years of my youth, when someone said “theater” you pictured only the stage and the three walls (the fourth was assumed), but now theater has a much broader understanding: a multimedia space, which both uses the latest [technology] and is protected from technological attacks. Regardless, the strength of theater is its living breath.

Now in Tehran there is practically no Armenian theatre; many actors have emigrated for political and religious reasons. Thirty years ago, there were 200,000 Armenians in Iran; today, that number has dropped to 50,000.

New technologies influence not only art, but also life in general. If before, the dissolution of the Armenian community took place physically, now it’s more technological. And this first and foremost refers to Armenians.

I want to do a new theater production in Tehran, but I see that not only are there fewer Armenian audience members, but also I can’t find a handful of people who would be interested in acting in Armenian. Often, we’re forced to write the Armenian text in English, since many don’t read Armenian anymore, and the language is being forgotten.

Acting is a difficult, not independent, even unpleasant profession, since it’s dependent on the director. But I think each of us have art within us, and by expressing themselves, people can get rid of their problems. Major actors, of course, have their own stamp, signature, and unique interpretation.

As an actor, I have received many offers from Canadian TV series, but I’ve always declined and haven’t established a connection with television. I don’t even have a TV set at home; this is a decision based on principle.

It’s hard to “digest” that which is shown on television, since with every broadcast or ad you are indirectly forced to buy this or that product or  watch this or that film or program. Today, buy glasses; tomorrow, clothes — you eat the dish the screen tells you to eat, and it’s like that endlessly…

There’s an attempt to create an audience that dresses, eats, and thinks alike, which I think is very much like the reality in George Orwell’s 1984. Television is a propagandist and, to some extent, communist phenomenon. And it plays a big role everywhere in the world.

In life, there are so many interesting things, which television that generates dependency cannot replace. I notice now that the Internet also creates the same terrible dependency: it seems you’ve gone online just for a few minutes, then you discover that, going from one website to another, you’ve spent hours [online] and your day ended without your noticing.

There’s never enough time, but at the same time we spend it on meaningless things.

Iranian-Armenians, for example, spend the whole night watching Armenian or Latin American soap operas dubbed in Armenian. There’s a time in my brother’s family when everyone puts their work aside and watches the next episode of a soap opera. Of course, I don’t have the right to reprehend them, as I am not a consumer of this product.

Soap operas produced for sale are screened on not only television, but also movie theaters.

Generally, film is strongly tied to the economic sector, and valuable cinema itself comprises only 5% of the entire film production (which is not a small figure). In the US, for example, there are 2,000 films shot in a  year, but many see 50 at most. In Iran, too, 400–500 films are shot annually, and if 4–5 of these are worthwhile, that’s good enough.

In the global cinema arena, the shine of Iranian films has faded, though of course very interesting films are being shot now. I think, the reason is also the international media, which sometimes focuses on this or that country’s culture and ignores other cultures. International festivals usually try to discover new names and new images, and Iranian cinema, it seems, has been pushed to the background.

Let’s not forget that political pressure forces directors to leave Iran, and many can no longer make good films. Mohsen Makhmalbaf, for example, lives in France and has lost his connection to Iranian cinema. Asghar Farhadi, Bahman Ghobadi also.

When a director lives in another country, his creative energy and also the interest from abroad, it seems, disappears. You are interesting to the world only when you’re in your place, you’re close to the root, you’re original, and you speak in your name.

I think, it’s like that in both politics and art.

For art to develop, a stable situation is necessary. In Iran, for example, laws are constantly changing. When a new person takes up a new post, he immediately begins to change the law or interpret existing laws completely differently.

Say, censorship forbids actresses to go on stage without covering their hair, so they often perform wearing wigs. But then comes along another official who says that wigs too are forbidden and only hijabs are allowed.

With every new person, there’s a new reading of the censorship code. This is why developing long-term, or at least 2–3-year-old programs is not possible. For two years, I’ve been trying to get permission to stage a production, but I have not yet succeeded. One person says, yes, and I begin to get a group ready, but then, a few months later, I am told no. And getting permission is a complicated process: first, the production is examined; then, the rehearsals with the set design already readymade.

Sometimes a production that’s passed the censorship is shut down only because a religious group submitted a complaint.

Under dictatorship conditions, art endeavors to create a new language. Paradjanov, for example, was the product of a Soviet environment. If someone like Paradjanov were to appear today, perhaps no one would pay attention to him. And in these free market conditions, he might find it difficult to express himself.

Everything is explained with the market. Money is given to he who has a buyer. This is how it is in cinema, in the theater, in the media. And so, what becomes most important is the producer, who is busy justifying art and information in the market.

He came to Armenia for the first time in 1991 (“on the eve of the collapse of the Soviet Union,” he says), as a theatre festival participant. But losing his passport in Yerevan, he was forced to go to Moscow to recover his identification documents. In Moscow, it turned out the Iranian Embassy was no longer operating as the USSR no longer existed. The anticipation motivated Levon to learn Russian and to get accepted into the Russian Academy of Theatrical Arts in Moscow.

He returned to Iran only 20 years later, getting an offer to play lead roles in two films simultaneously: Parviz and Fat Shaker.

Mohammad Shirvani’s Fat Shaker (2013) was screened  at the Sundance film festival, won one of the Hivos Tiger awards at the Rotterdam film festival, and has been picked up to be screened internationally.

While in Majid Barzegar’s Parviz (2012), Levon plays a humble, quiet, single man who feels useless and has no dreams and who just needs a small spark to explode and his destructive nature to come out. This film, depicting the destruction of a traditional family, was viewed by a limited audience in Iran, but in Yerevan, it was screened at the Golden Apricot film festival.

The offer to play in Parviz was made to Levon by Jafar Panahi, who has been imprisoned for the past few years for his political views.