“The Weight Of Words Is Small, But At The Same Time, Very Big: That Is Today’s Problematic Paradox” 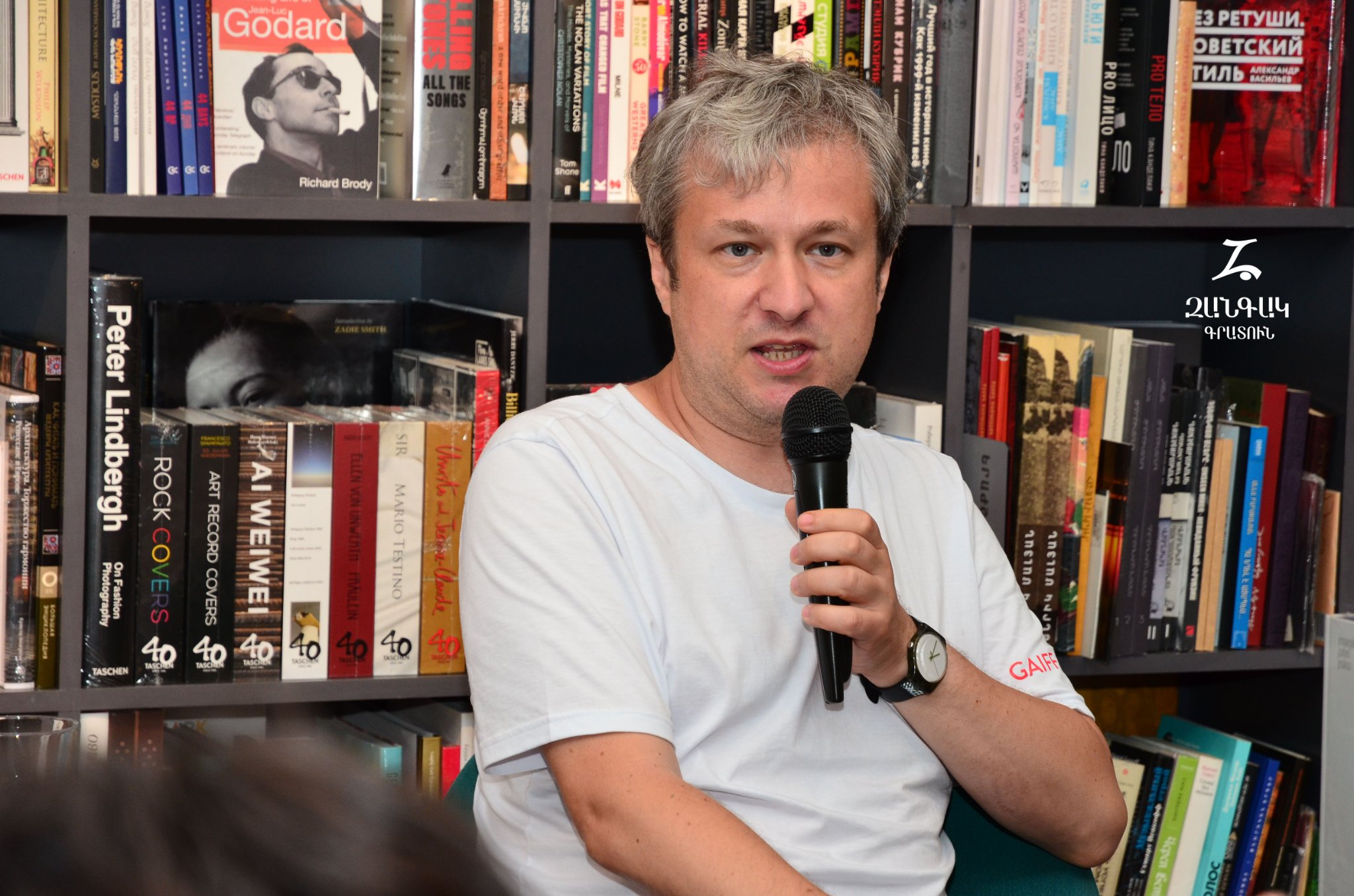 Since the beginning of the Russian-Ukrainian war, film critic Anton Dolin had to leave Russia because he had received threats against himself and his family. During the Golden Apricot International Film Festival, he was in Yerevan, preparing material for Meduza, where he has been working almost since its foundation.

Anton Dolin has worked for many media outlets, prepared programs, created a YouTube channel, and hosted podcasts. He is known for his ability to work, speedy reactions, and sympathetic speaking style.

The situation changed dramatically when censorship (according to Anton Dolin, hybrid censorship resembling a fishing net that combines economic leverage, unspecified agreements, self-censorship, and laws that can be passed in a day) began to destroy free platforms.

When even innocent conversations on social networks can be a cause for getting arrested.

In Yerevan, he met the Armenian audience at the “Zangak” library. And it was a very crowded meeting. Anton Dolin is an influential critic who does not hesitate to engage in long and often fruitless arguments on social media, patiently answering everyone.

He said the further you are from Russia, the more radical the film you make or the things you write on Facebook are, but they also have a weaker impact. Everyone is forced to feel the war on their own skin, even if they don’t admit it.

You have always worked actively and were a welcome guest in almost all media outlets. How would you describe the state of journalism in Russia now?

Nothing good is happening to journalism in Russia. The area of journalism has decreased to an absurd few meters and is actually shrinking like La Peau de chagrin. It started in the first years of Putin’s leadership, with the assassination of the NTV TV channel, and then continued.

We saw how different media, like NTV, began to change beyond recognition, to be “reborn”. Some media outlets changed dramatically, and some changed smoothly (such as “Kommersant”), but this transformation happened to all of them.

The media outlets that could not be changed and corrupted simply closed, for example, “Dozhd” or “Novaya Gazeta”. And that’s all.

Today, in the field of Russian-language journalism, there are actually only two vent windows, both operating outside of Russia.

First of all, there is “Meduza”, which can be considered a pioneer of this movement, and whose example will undoubtedly be followed by many other Russian-language media. And, of course, social networks.

It is no coincidence that Facebook was declared a “foreign agent” and an extremist platform in Russia. It’s absurd, everyone uses Facebook with VPNs anyway. I can see it from the reactions of my followers, people continue to read and actively discuss my posts. It shows that people actually see and read Facebook.

If it were not for social networks, it would be very difficult.

They help to be present in a rather democratic mode. On social networks, people who have a certain audience and media visibility and are professionals in their field (or what is also important, are not professionals at all, but can gain media reputation) can afford unprofessional speech.

In this case, I consider it an advantage, not a disadvantage.

In short, now only emigrant or opposition-oriented Russian periodicals and editorial offices located outside of Russia and social networks are the two phenomena that do not allow Russian journalism as a profession to die completely.

Social networks may not be considered a full outlet, if only because the journalist is not paid for their texts.

I agree, but all the same, paid journalism is now a rather blurred concept. It is possible to think whether the field of journalism has been completely destroyed.

Maybe not, but it’s definitely blurred.

A teenager’s opinion on social networks can make a bigger wave than someone who actually says something substantial. Isn’t that an impediment?

I don’t think it’s a serious problem. On the contrary, for me, it is a fun challenge. I don’t like to be the person who is on a pedestal or behind a podium with a megaphone in hand, while the rest don’t have that megaphone.

Everyone knows that I like to argue with my followers, even those who write absolute nonsense.

Maybe that’s how I temper my patience, thinking that such exercises are useful.

Does propaganda decide a lot?

Of course, there’s a lot of it both in professional media and on any other platform. Propaganda is everywhere, and serious human resources and money are invested in it.

And let me repeat again: it was like that from the beginning of Putin’s rule and that is his trademark.

And what is the most unpleasant mark that propaganda can leave?

The most unpleasant thing is how people, motivated by the obsession to be famous, so to speak, swallowing the bait of the promise of hype, easily make their own beliefs into a commodity.

It is difficult to teach people to be responsible for their words. It is an almost impossible goal.

In general, now the weight of words has decreased so much that it has become insignificant.

But also, paradoxically, that weight is too great. Especially in these times, when many people’s mouths are simply closed.

Speech is worth nothing, but it is simultaneously worth a lot. And that is the most serious and problematic paradox that we are living in now.

The weight and value of speech in Russia changed dramatically the moment people started to be arrested for words (including quite innocent ones).

And at once it became clear that the carefree and casual conversations that people were having on social networks were not what they seemed.

They were already something else. Let’s say, a cause for ending up in prison. People saw that they could be imprisoned for seven years for the ordinary words, “No to war.”

I hope that such a thing will never happen in Armenia. 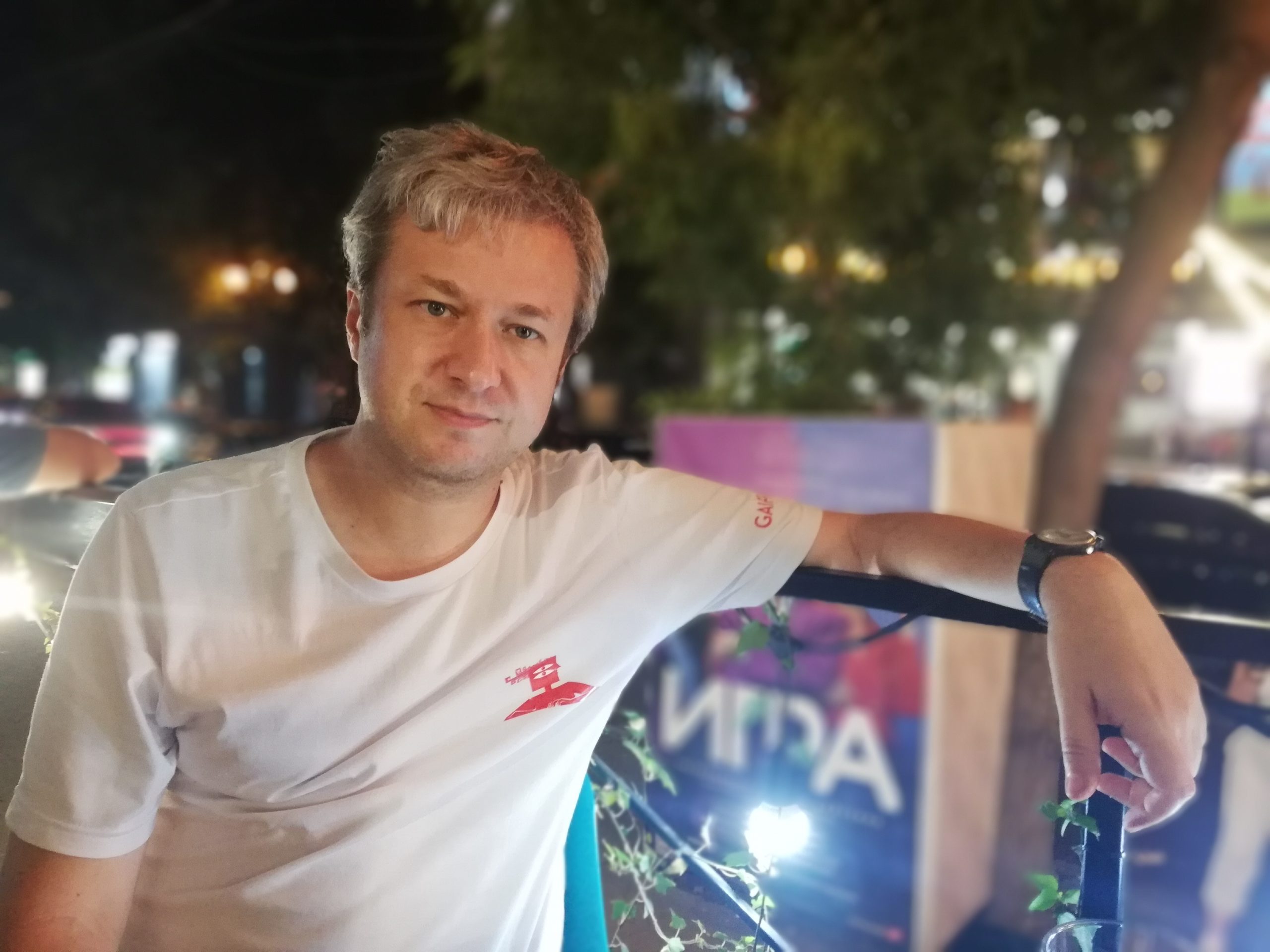 In Armenia, all Russian federal channels, as well as the propaganda RT, are broadcast unhindered. The influence of the Russian Federation is great: we are dependent on the box office and we are consumers of propaganda.

I can only say that it is a consequence of the heavy Soviet legacy.

Does language play a role?

I think that, on the one hand, language becomes part of ideology, and on the other hand, language cannot be a full-fledged weapon of either propaganda or counter-propaganda. Language is just language.

It is a double-edged sword that can strike on one side as well as the other. And it can harm the person in whose hands it is.

During the meeting, you said that now is the time to speak on your own behalf. How true is it for journalists as well?

Nowadays everything depends on specific people.

The names of journalists are more important than the names of the media.

Names and brands of mass media raise suspicions, and the journalist and generally anyone who speaks on his own behalf already plays the role of a brand and becomes one.

The personal lesson that the war taught me was to consciously abandon any use of the pronoun “we.”

I am trying to destroy that word. There is no “we”, there is “me.” What you do, you do absolutely on your own behalf.

You are the only one, although, of course, it is difficult to accept that you are alone.

And is the role of the critic changing?

The role of critics will remain as it was. Art is always one of the basic requirements of a person, in one form or another. And the critic is a person who is a mediator between that art and the consumer.

As long as people need art, they will also need mediators, because creators are usually self-absorbed and cannot directly deliver creativity, especially in cinema. And it is naturally impossible to believe in the honesty of art sellers.

A critic will always be needed as a mediator.

It doesn’t matter what form that mediation takes. It can be a social network conversation, a personal YouTube channel, or just a meeting with people, as happened in Yerevan. Or through a book and a text, including a very long one.

All of these are functional forms that can exist simultaneously. The balance of those forms can change.

I think that the form of journalistic service, which is based on advice: watch these movies, read these books, etc., is becoming useless now. And again, the reason is that there is no “we.”

Maybe analytical or diary formats are more popular. I still haven’t figured it out myself.

There is a lot of war, genocide, and pathos in Armenian cinema, which comes from the best motives (to show the pain and that we are right). How successful are such films if they are directed by, say, Ukrainian directors? I know that in recent months you write a lot, especially about Ukrainian films.

There are many films about war in Ukrainian cinema because the war has been going on there since 2014. Among the films, I have not come across any pathetic films, although of course, there will definitely be some.

Ukrainian films are almost all about trauma, about very hard and very ugly everyday work. About how war paralyzes people’s spirits.

Pathos can be found more in Russian, so-called patriotic cinema. But it’s just a fake movie. A lie, and that’s it.

And since it is definitely a lie, it affects very few people. I don’t believe that people can really like such a movie.

If people look for benchmarks in movies, they do so from old cinema. No one expects benchmarks from new cinema, it is for entertainment. Very little, maybe 1-1.5% is for thinking, the rest is entertainment.

And sometimes, disguised as entertainment, propaganda poison is injected into the audience. Sometimes deep, provocative, and interesting thoughts. That also happens.

You have a reputation as a good critic. Maybe now you can regret that you didn’t write harshly about propaganda films.

I don’t think that my readers watch such films. Of course, people are happy when I write something bad, but by and large, what I write has nothing to do with people who could theoretically buy a ticket to see a propaganda film. They seem to be non-communicating vessels.

I decided for myself that I should do the work of a critic carefully, without abusing it.

But sometimes yes, I am tough. In the end, I lost my job at Channel 1 for writing an honest article about such a patriotic film. I really believed that “Salvation Society” was a dangerous film, which was watched by the masses.

Basically, such films are made, but people do not want to watch them. And in that situation, I think that it is not worth giving the last blow to those poor, useless cinematographers.

It is better that they get a dose of indifference from the audience themselves. That will be the best solution for what they have done.

Can you name at least one movie that was really bad and was a huge success at the box office? You can’t. All those propaganda films failed because no one needed them.