“Listen, listen and listen again։ This is what a journalist needs.” 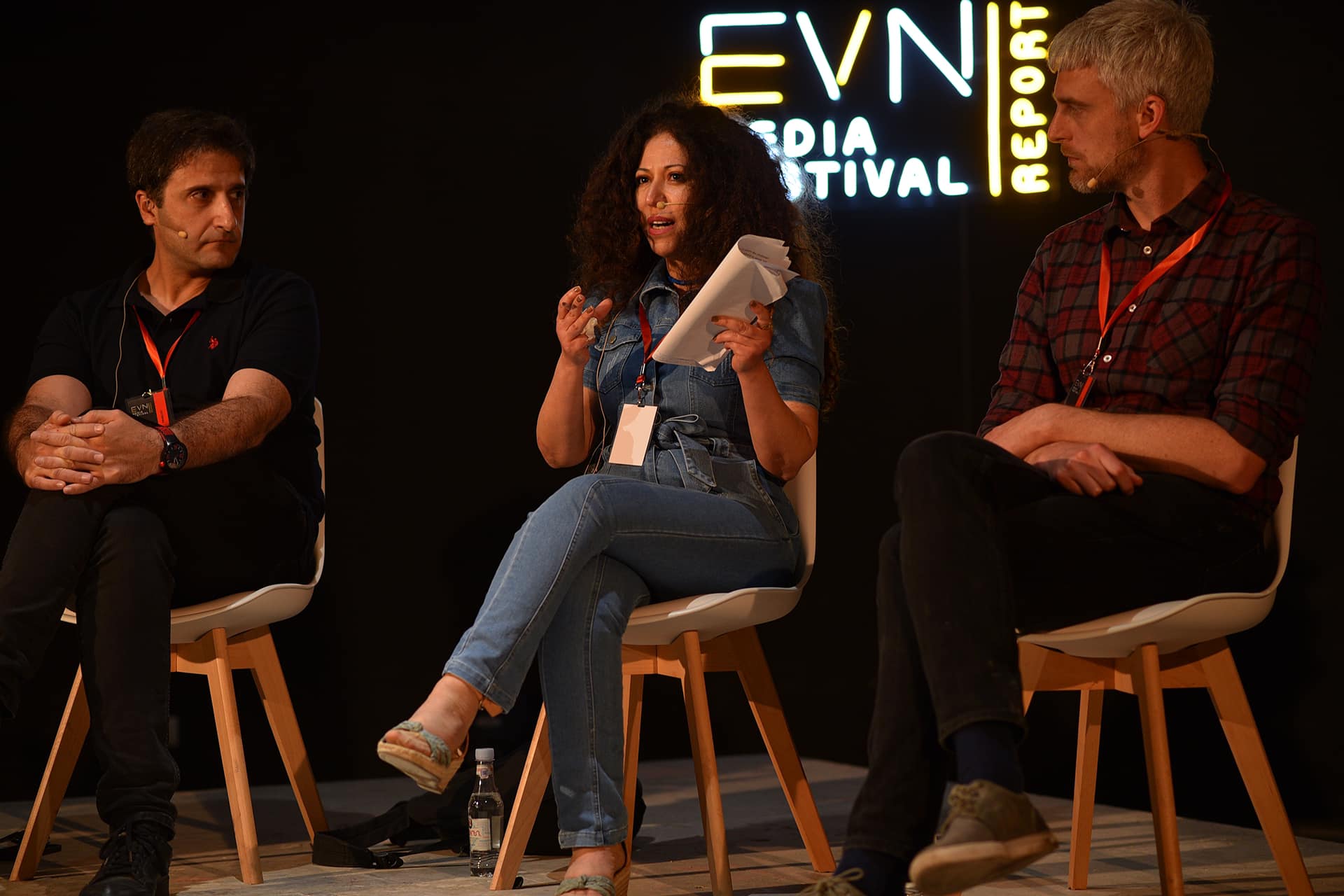 It is difficult to write about war if that war is raging in your country. New York Times Beirut correspondent Hwaida Saad says that covering the Lebanese civil war was more difficult for her than, for example, the war in Syria, as there is always a need to balance external and internal views on events. And it is very difficult to do so if it is a war involving your country.

Hwaida Saad was one of the guests of the media festival initiated by EVNReport. During the discussions in Yerevan, she spoke about her experience. Covering a war was not her choice, it just turned out that way. For many years she wrote about the conflicts in the region, the food and humanitarian crisis, the Islamic State, and human destinies. And when catastrophe struck, the Syrian war that has lasted for more than ten years, Hwaida Saad became one of the main voices of news for The New York Times.

It is also a unique case that The New York Times featured Hwaida Saad in a separate article. In other words, the journalist herself became the hero of the article.

We started our conversation with Hwaida Saad about “both sides journalism,” which is considered a requirement when covering wars.

For example, the media quotes what one side stated,  and the other denied, the accusations made by one said, and how the other countered the accusation, etc. (we also saw such an approach during the international coverage of the Artsakh war). Or when different numbers of victims are announced by the conflicting parties and it is impossible to check it.

Empathy and human ethics are important for Hwaida Saad, she reminds us that journalists are not robots, they have the right and mission to sympathize and listen to their heroes. What the final version of their material will be is another question.

Does “both sides journalism” help to understand the real situation or is it no longer relevant?

It is very important to cover both sides. If, of course, you can …

And if the reality remains unrecognizable either way, it becomes even more complicated.

Of course, it is a challenge for journalists. Sometimes it is very difficult to understand the full story. But when you cover conflicts, you try to choose the parts of the story that have been proven to be true. You must write only the truth.

As a journalist, you need to find out what really happened. Indeed, it is sometimes difficult, especially in certain places, where your reach is limited and you try to be aware of all parts of the conflict. Although it may not be possible to do it perfectly, that is our job.

The journalist’s job is to keep looking. You are looking for sources and different sides to the story.

The question to start with is, “what is really happening?” Sometimes you might get the answer to that question years later. This is what happened to the video I shot in Syria, which 12 years later helped to clarify the situation. The Guardian republished it and found people who knew the heroes of the video. And so the story was completed.

Earlier, I thought that only one side in Syria committed atrocities, but then I found out that the other side did as well. And I asked myself, why am I focusing on one part and missing the other?

In fact, when you are reporting on an event, you focus on everything. And refuse to fall prey to emotions.

But sometimes it is not possible, if only for the fact that there are not two parties, but many.

It was like that in Syria: There were so many parties that it was impossible to try to include the positions of all parties as a journalist.

As a reporter, you must build your own network.

Sometimes it is difficult if you are not physically on the scene. But even if you are physically there, it is still difficult, because you may not have access or you’re surrounded by minders who do not allow you to go where you need to go.

So the idea is to have as many sources as possible and as many opinions and voices as possible. Start from there. Find those voices, find those contacts and listen to them.

Listen, listen and listen again. That’s what you need.

Of course, listening to many opinions can be confusing, but it must be done.

I am sure that as a reporter you must write your story. If there is no such story, the editor-in-chief will demand one and will not understand what is happening. And if you do not understand the whole truth, tell them so. I think that will be the smartest position.

Many journalists want to show that they know the truth, but we are not God and we cannot know everything.

Of course, if we are talking about breaking news, when it’s important to quickly respond, you must know what happened before reaching the scene. And as I said, in that case, the network you have built will help you to get accurate coverage. A network that you have not only built but also trust.

Earn the trust of your network. If your contacts trust you, they will share information. There are cases (and it happened to me) where the people speaking to you convey false information. And you realize that you simply cannot check everything. 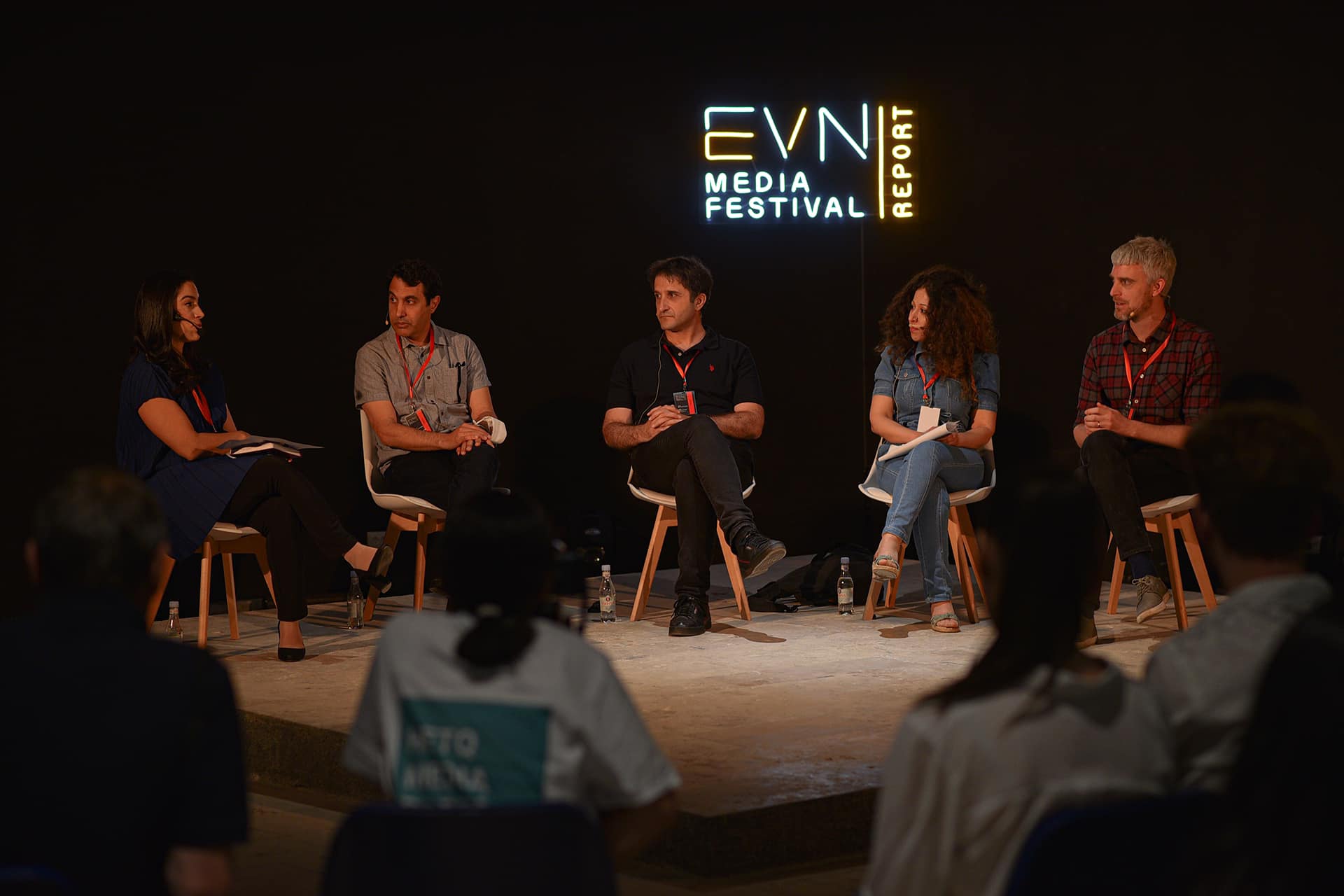 Hwaida Saad during the discussion at the EVNReport media festival

Do you check what the sources say?

I try to check. I spend hours trying to find out the truth. This is what I did in Syria when covering the war, but I cannot say that I told the whole story (maybe 50-60%).

Later, if the whole story is revealed, an extensive article or book can be written about it. Daily journalistic stories are something else, with limited words and time. In books, you are more free.

I wrote a book called Our Women on the Ground. It is a collection of essays by Arab women journalists who covered the conflicts in Yemen, Iraq, Syria, and more. In a sense, that book helped me to publish stories that I did not publish in The New York Times.

So, it would be good to keep all your notes (in general, keep everything), because later you can use them in exhibitions, and books, making your stories more public.

Now that journalists do not have a monopoly on information and everyone speaks out and talks on social media, how do you foresee the work of a journalist?

I think there is always a new point of view and a new perspective.

We often think in fear: Oh my God, every media outlet writes and publishes materials about what I am going to cover. And how can I find something new to write about?

Remember that there is always something to write. There is always the opportunity to add something new, to find small parts of the big story that have not been written about yet. Always.

That new perspective is important for me, the search for a new side to the story. It makes you a journalist with good eyesight and a “sense of smell.”

Now we live in a very busy world: Twitter, WhatsApp, Facebook, stories, and so on. Social media is everywhere. And it is a very noisy world. And who do you think is interested in journalistic stories? Not many readers.

Yes, we do our job and cover the conflicts. But do you think readers are worried about what is happening in other countries? Of course, some people care, but most do not.

It’s important for me to find small in-depth stories that can engage readers and motivate them to learn more. In a very noisy and crowded media world, the interest in long and big stories is decreasing.

People do not want to read long texts, they read only two lines. Even when we come across long Facebook posts, we immediately skip them.

And it is important for journalists to constantly search and find stories that are interesting to the audience and that have not been covered yet.

We live in a constant search mode, paying attention to new stories, sources, and contexts.

I wrote an article about a Syrian child whose father had beaten and chained her, in an attempt to present the human side of the story. In general, people want to hear that human tone in journalistic materials – the voice of a woman, a mother, a child. They love it and want to read about it. My whole experience proves it.

In The New York Times, we have begun to pay more attention to human stories. I love them too, that is why I focus mainly on finding them.

Don’t you think that the female gaze and movements (for example, #MeToo) also brought an artificial agenda to the media?

Sometimes men suffer at the hands of women (I have seen many such cases). It is better not to focus on or follow these trends. I follow and cover the stories of men, women, and children.

But I’m interested in women’s voices in certain communities where women often cannot speak. This is my topic and my challenge. I want to hear and publish their stories because they are not heard, especially in conservative countries.

I do this not because they are women and that I support women per se, but because their stories haven’t been heard before.