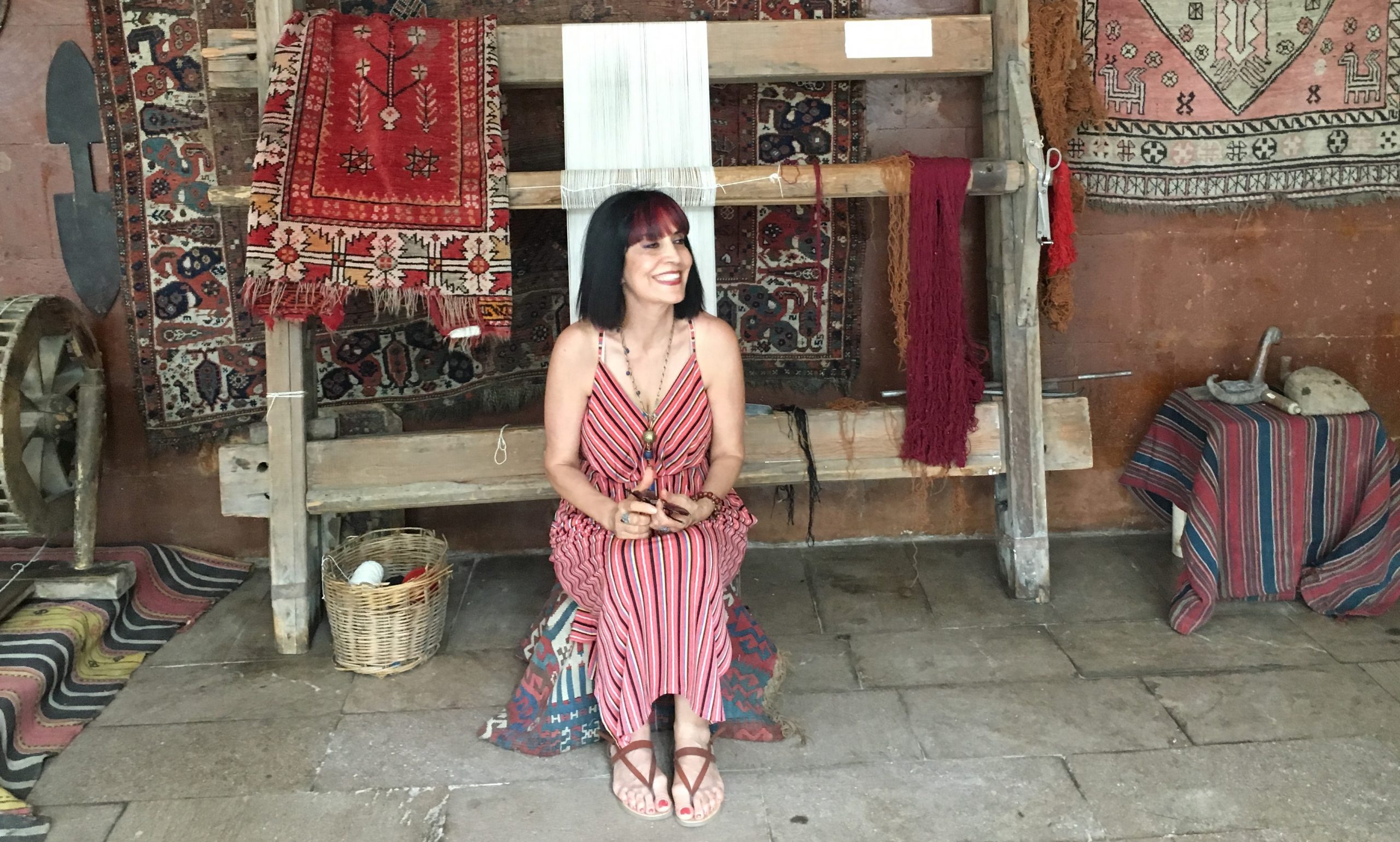 Women’s rights and, in general, greater visibility of women in the public sphere are very important for Anahit Aramuni Keshishyan.

Anahit is a human bridge by nature: she connects cultures, languages, and initiatives. Her life changed dramatically several times, first with her parents moving from Iran to Soviet Armenia, then emigrating to the United States, where she taught at the University of California, Los Angeles, UCLA, Glendale Community College, and several Armenian schools. In 1988, she founded and headed the “Mashtots” Armenian language school in Los Angeles. She has also conducted summer courses at the American University of Yerevan, Ca Foscari University in Venice. She has staged performances, and published literary magazines.

In 2019, she re-established herself in Armenia, admitting that the political change was not so much an important stimulus for that decision as the change in public mood was.

Anahit Aramuni Keshishyan considers it nonsense that since March 8 and for almost a month both various officials and the media have been comparing women with “jewels,” “roses,” “spring,” and that society has become accustomed to it.

“There is no such holiday either in Iran or in the United States. There are holidays for mothers and fathers. I always say, do not congratulate me on a holiday in which I did not play a role. Why am I being congratulated for the fact that my chromosomes are arranged in this or that way?”

She is convinced that efforts should be made to change this attitude from both sides: from the top (high chairs) and from the bottom (working with people).

Public wishes towards women are reminiscent of Soviet speeches (general, sublime, empty). It seems we have inherited it and we do not want to give it up.

Relying on inheritance in general, justifying everything by inheritance is a sign of laziness: it’s easy. You say this is my culture, I have inherited it and consider the problems solved, consciously or unconsciously.

In fact, it is a debilitating attitude. If you end the cultural chain with what has happened to you, then you stop the natural development of society, which harms the same society.

For example, the text of the March 8 message, written by the acting President of the Republic of Armenia, is again about spring, flowers, and holy destiny. It is a text trap.

We can, of course, rightly criticize our officials for such flat texts, but how can we treat the thousands of women who are waiting for that very text and congratulate each other with the same references and wishes. They are our relatives, our friends, neighbors, and our partners.

Work should also be done on certain issues of disenfranchisement of men. Unfortunately, even in the most developed countries of the world, there is still a mentality that a man’s perfection is determined by his strength.

A man is expected to be physically strong, fearless, and earn a lot of money.

But nature does not create men with uniform and equal forces. There are women who are physically stronger than some men with thin bodies. After all, women can make more money than some of their male friends and relatives.

To impoverish a man for that, to rebuke him for his natural or innate weaknesses, is unjust and does not lead to anything good. Then let us not forget that the need for physical strength has diminished sharply since the beginning of the 20th century; A man will not break the mouth of a lion, nor will he drag a giant cart with the strength of his muscles, nor will he wrestle with robbers in everyday life to protect his mother and sister.

We often say that we need exemplary and influential female characters who, by spreading through the media, in soap operas, movies, and various debates, can break stereotypes.

Exemplary characters and role models are the most important, and even more important is their visibility, which decreases and complicates the problem.

The characters of the books and movies we have read or are also reading are also very important.

In Tehran, my father used to give me books to read about revolutionary barmaids. These were mainly Soviet books, the propaganda layer of which I did not understand well in those years. And I admired, for example, the brave girls who hung leaflets on the walls of the streets hidden from the eyes of the police, and I thought that I would do the same when I grew up. Then, in Soviet Armenia, I tried it, which ended badly.

Interestingly, in the late 19th and early 20th centuries, we had highly progressive individuals, both men, and women, at a time when women simply belonged to men, first to their fathers, then to their husbands, who had no property or inheritance. She did not have the right to vote or even to be a citizen of the country, and this was the case in Europe and America.

The 60s and 70s were more significant than the stages of the women’s equality movement, during which the wing of feminism was formed, for which men who kept the tradition became enemies. It lasted a long time and in turn aroused an aversion to feminism.

I would like us to be sensitive to isms, not to give in blindly to them.

Personally, I avoid isms, I do not fit in cages, or molds.

My mother, a semi-literate woman, did not know what feminism was until the end of her life, but she was an exemplary feminist to me. “What difference does it make, darling? Do what you want,” she said.

It is problematic when we say that a man and a woman should be equal, how can it be when two women or two men are not equal to each other. Their rights must be equal.

Is it only a matter of culture, when, for example, exhibitions of women artists are organized on the occasion of women’s holidays, and it does not matter what kind of artist she is, only her gender is important?

This is a difficult question. On the one hand, it is important to give an opportunity to the under-represented sex to appear, and on the other hand, if it does not have the appropriate quality or merit, it becomes something like mercy, it becomes an occasion to drink an unnecessary and formal toast.

Frankly, I’m ashamed to drink my toast as a woman. Sometimes before I start toasting I get up and ask to be allowed to drink the first toast, and I drink the toast of the “fair sex” – men.

To put a woman on a pedestal and say that she is beautiful, a flower, a rose, and a lily… It is simply unacceptable to me.

Then, this common custom of giving flowers to a woman. Of course, giving and receiving flowers is a pleasant thing, but it should not be one-sided. My ex-husband, for example, loved to care for plants and flowers. I would give him flowers.

Many people just live on social networks, without them they do not seem to have a life and an exchange of ideas. Is Facebook a mechanism to check the public mood or is it an illusion?

Facebook is a large platform with a variety of features, but if we “clean it up” a lot to save our nerves, we turn it into a shell or a bubble full of like-minded people.

It is as if you invited, say, a hundred people to a meeting and only ten came. And you start complaining about those who did not come. It turns out that you are reading a sermon to those who come, who in fact need to hear it the least.

And today the real problem is to get out of such bubbles, to see far, to be responsible for the present.

What do we do? We gather with our special interest groups, listen to each other, admire each other, make sure that we are progressive, developed, applaud each other, and are satisfied with that.

Of course, the opinions of such groups are also voiced in the media and public platforms, but how many listen to or watch them?

Instead, the audiences of girls who have “beautified” themselves with a thousand and one efforts are exploding and the army of those who follow them with envy and longing is growing. Here are our role models. That is what needs to change.

According to the unwritten rule, the presenters must be young and have a similar appearance. A woman with wrinkles is not allowed on the screen.

Unfortunately, television will not give in for the sake of its rating. The law of “Forest” operates there.

Most people consider the images given by the media to be exemplary.

In my opinion, sometimes the effort to look beautiful reaches morbid proportions. Some European countries are more sensible and more tolerant of people of non-standard beauty.v

Do you not teach now?

At some point, I felt that after giving a long lesson I started to appear in a special bubble. I wanted to go out, but I still do not know where. I remember Mikael Nalbandyan’s poem – to be in the square, to fight.

I would like to give a positive veil to this conversation. As a country that has been ruled by great empires for centuries, it has been a difficult task to build and maintain a comprehensive national image and identity. We had very different characters: Persian-Armenian, Russian-Armenian, Tachka-Armenian, and other characters.

But with all this, we are in a better and more correct place than expected. I really believe that we have a great potential for development and growth.

There has been a lot of talk lately about national discrimination and that is very good. It is due to talking and shouting that we are in a good place today.

The same is true for the attitude towards women. No matter how many problems there are, you have to admit that there is progress, that only ten years ago you could have been shot for using the word “gender.”

When I came to Armenia for a few months in 2016, I wrote to my niece that for the first time the idea that I could live here began to mature. She asked why. I answered because men started wearing colorful shirts.

These messages continued with my niece the following year when I told her that I could definitely live in Armenia. She asked what happened now. I wrote that I see men in the city walking with children in strollers and even changing their diapers.

And that is very important for me. Our country can progress by leaps and bounds. I believe in that. Only if there is peace.