“We Learn About Many Events From Undesirable, I Would Even Say Rejected, Sources” 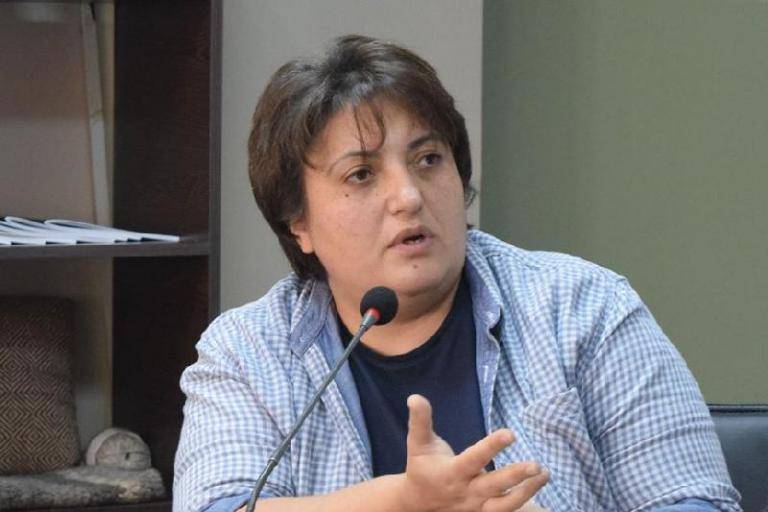 According to lawyer Nina Karapetyants, today’s contradictory and hateful news atmosphere is already bearing fruit. People may attack each other during the day because of minor disagreements.

She is convinced that the work of the media spreading misinformation and receiving information from rejected sources could have been regulated if the fight against corruption and illegal enrichment had not been fake.

And now the permissible limit of the media field is so blurred that it is almost impossible to control.

In today’s uncertain situation, information seems to come out of nowhere, even from places that were taboo. What is happening with the media field?

In fact, people are no longer following the media (which should mean the publication of verified, accurate information), but are simply flooded with information and can not understand where the truth is.

And a significant part of the blame lies with the authorities.

The fact remains: We learn about many events from undesirable, I would even say rejected, sources. I mean the enemy’s sources.

Official sources of information are silent for a long time, then deny the circulated information at first, but after a while confirm it.

And that creates distrust in official sources.

We have a serious problem, which is fake news. Although it exists all over the world, it has become a direct security issue in Armenia.

There is a lot of information and contradictions. Is it possible for a citizen to sue the state on the accusation of the violation of his rights to being informed? Let’s say, a person has suffered moral, psychological or even physical damage, following only the official news.

I have a hard time imagining how that could be. But in reality, we have had situations when we did not have official information for a long time, we all found ourselves under a serious blow.

Especially in the unstable situation created after the war, false rumors were spread, which were not followed by official denial or confirmation, which can be described as psychological pressure. And such pressure is also an element of torture.

An entire nation is waiting to understand, for example, whether our boys have been taken prisoner or not. Or have we lost some territory or not?

This cannot continue, as this is an attitude of disrespect and torture towards one’s own people.

And when we hear accusations that information is disseminated from undesirable sources (which, I personally consider inadmissible), we can say, sorry, but people have the right to be informed about themselves, their families’ right to life and safety.

But is it only the fault of the state? After all, we did not have the volume of free and independent media that would dictate quality.

The media outlets that are responsible for their publications are special in the media field. And most of them are clearly directed or have an emphasized position.

This issue will not be fully resolved, as it can be seen as an attempt to restrict freedom of speech. But in any case, the existing regulations could be used.

There is a reservation here: During the war, for example, there were serious restrictions on the dissemination of information and strict control. But as a result, it turned out that not providing complete information about the war (in order not to help the enemy, and not to discourage us), was actually used to circulate false information by the authorities.

So, the border of freedom of speech and control is very delicate.

In my opinion, the way out should have been different. After the revolution, the authorities talked about stolen or robbed money.

Today’s news sites, which claim to be free media, are in fact fed by these very financial sources.

And in order to be able to at least partially stop the disgraceful flow of this misinformation and the torrent of manipulators, it was necessary to establish control over the sources.

If initiatives against illegal acquisitions and illicit enrichment were implemented within the framework of the fight against corruption, it would be possible to prevent the flow of misinformation at least in that way. Otherwise, now, when separate accusations are made, nothing will change.

There are so many media platforms that in this situation it is impossible to control them anymore.

Now it is really rampant, the doors of the storehouse of hate speech are wide open. What effect will it have on our lives, say, in a few years?

We are already seeing the consequences of the generation of hate speech.

Recently, there was a case of stabbing due to disagreement on whether to wear a mask or not. I think this means that we have really reached the finish line because it is difficult to imagine a more terrible consequence than that.

The cessation of hate speech cannot be regulated in any way by legislative acts, even if there are brilliant laws. The most effective option is your own example and your own behavior.

I have to return to the role of the authorities. I did not have any expectations from the previous criminal regime, but I had an expectation from the revolutionary force that they would not cross the red lines and would show by their own example the rejection of hate speech, insult and swearing. Unfortunately, that did not happen.

We saw that intolerant speech is heard even from the number one tribune, the National Assembly. And every citizen sees with their own eyes behavior that is full of hatred and even fighting. And after that, how can they think that they are expected to behave differently?

Hate is easy, maybe that is why the language of hostility enters the political field as a component of populism.

It is one of the elements of populism, but even in that case populism could be used for the benefit of society.

For example, to explain in the most accessible, understandable language the best behavior that is expected of people, rather than motivating them to imitate the worst examples.

It is not enough to speak, we had to act, not allowing anyone around us to cross the inadmissible limit of swearing and insulting. Including on social media.

The priority is its own example. You can not insult, swear, go too far, and then expect the rest to be tolerant.

Until 2018, there was a feeling that nothing depends on the ordinary citizen, including the election results. Then came the pleasure of being involved. Now it seems that the citizen is completely out of the game, even tomorrow does not depend on his/her decisions.

I would say that tomorrow does not even depend on the Armenian authorities, let alone the citizens.

But in reality, citizens have the best way to make their voice heard, and that is the elections.

No matter how much they try to manipulate, play, buy, sell votes, the votes still have the most important value during the elections. Otherwise, in order to get votes, there would not have been so much investment in the elections: abuse of administrative resources, distribution of money, bribery, etc.

One must clearly analyze the situation and make a conscious choice.

It is another matter of what condition we have brought our citizens to and whether they want to take the right step, taking into account this big wave of disappointment.

Yes, today the choice is not big, but there is a choice. People can choose any force that suits their imagination.

Are we ready that regardless of the outcome of the elections, there will be a big wave of dissatisfaction and mutual accusations? What do lawyers see to be done here?

During these last three years, my argument and fight with the current authorities, and in the end, the reason for rejecting them was the idea that if there are no justice bodies, you can do nothing.

You can have the best laws in the world that govern different areas (from elections to education, investment and security), but if there is no refined justice system, you can not expect results.

For example, now the legislation related to the elections has changed, which has tightened the approaches to various crimes, up to operative-investigative measures – wiretapping, investigation, etc.

But all this will not work, because it is unknown who will be assigned control of those spheres.

Again to those systems that just a few years ago very nicely covered up all the crimes and justified the rigged elections?

And it is not only about the courts but also about the investigation bodies, the prosecutor’s office and so on. So, if the prosecutor says loudly that we must fight against election fraud, you want to understand who he is mocking, himself or us?