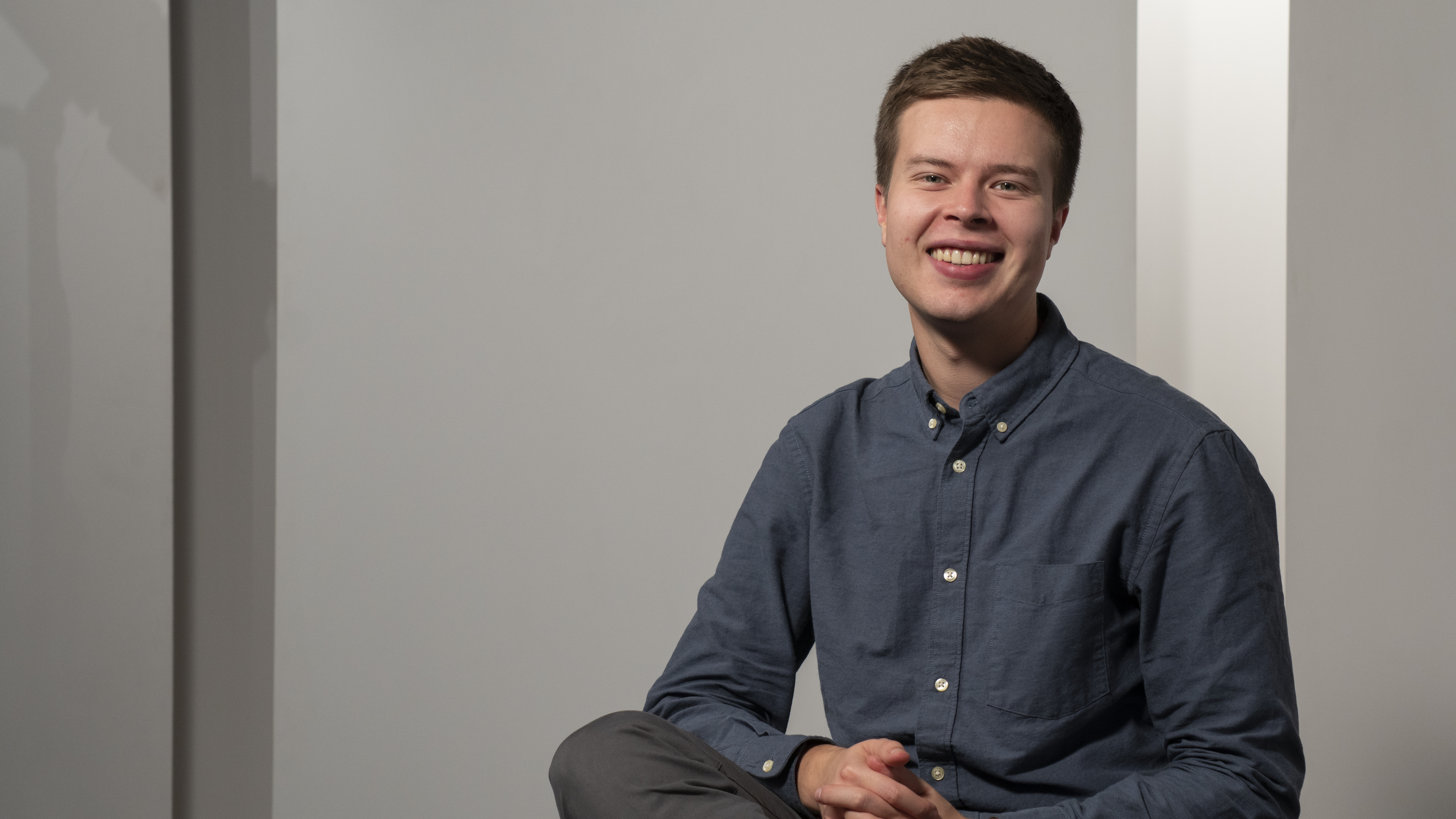 Ukrainian podcast Kyrylo Beskorovayny is doing his best to present the scientific potential in Ukrainian.

He is the co-founder of the popular science magazine Kunsht and is confident that science can be a joyous endeavor full of secrets, adventures and results.

Kyrylo belongs to a generation that has not seen the Soviet system and because of this, it is much more flexible and fundamental to the role of science. In his view, science, first of all, provides the best way to understand the world: to test, to verify, to experiment and to re-test. This ability is needed in all areas.

Kyrylo, conducting a master class for Armenian podcasters in Armenia, tried to hint that the audio format is becoming relevant, as it saves the most valuable thing, the audience’s time.

It is common to think that science is boring and complicated, and it is also badly sold in the media. Why did you decide to do a science site?

At the core was personal interest.

In 2013, a group of classmates and I decided we needed to create a new print magazine to read. Then we realized that the magazine was too little and went online so we could tell as large an audience as possible about science and technology. We wanted to find a way that would have an impact on society. And finally, we stopped at the podcast.

The language issue was very important. There are good and powerful websites in Russian and they are available to all Ukrainians, but having Ukrainian-speaking media was a matter of principle for us.

We decided to look further and create products in Ukrainian. There were no scientific platforms in Ukrainian at the time, and now more and more initiatives are emerging. We are no longer the only ones, though we are the largest.

We also have such an Armenian-speaking scientific platform, the channel Boon, which fills the gap in the Armenian scientific word in the media field.

Language is a growing, flexible organism and part of the culture. If you create quality products in your language, more people are communicating and reinforcing that cultural layer.

I think one should always start with local initiatives, but think in the long run.

We are fighting the stereotype that science is complex.

Even the name of our site, “kunsht” translated from ancient Ukrainian means art. That is, we try to show that science is an art and we cooperate not only with scientists but also with artists. To make it beautiful as well, and the content is not repulsive but attractive.

Isn’t it difficult to talk to scientists in such a way that their words can be understood?

Actually, it’s difficult. We often ask them to speak as if they were to explain to fifth graders.

Science is very important because it is the engine of progress. And the more people work in this field, the more the state will develop.

It is commonly thought that post-Soviet countries are suppliers of raw materials such as wheat, minerals, etc., but if we look at the global, we will see that the fast-growing countries are the ones where new discoveries are made, the scientific mind is working.

And we want to invest in having a curious audience, to create a community of people interested in science so they can interact, collaborate and generate new ideas.

Now, for example, we are connecting scientists and businessmen so that there are support and investments.

In the broadest sense, our goal is to promote critical thinking, as science itself is based on a scientific method, which means we are inclined to perform many tests.

Science gives a key to how to verify information, not by words but by facts. It is a useful skill that is needed in any field.

If you have a scientific method, you can do any job and be successful. For example, in the media, in the political field or in business.

By critically evaluating any information, we can understand how they want to influence us, manipulate us. To avoid being a victim of this, the scientific agenda comes to the rescue, which grafts on critical thinking skills.

There are also many anti-science topics (such as conspiracy theories, false medicine, etc.) that are destructive but widespread in the media.

Unlike manipulations, science does not scream and shout, but declares calm and grounded. And though it sometimes loses because of it, it is the only way to resist the screams, the hype and their virus.

People like to spread hysterical and scandalous material. It is more difficult to reach an audience when there is no scandal.

We have to look for new ways so that we do not resemble screams and hysteria, but at the same time, not lose an audience. We try to do it through art, science and various projects.

The thought is this: science is not boring, but rather interesting and enjoyable. And we need not fear that we will now be burdened with obscure content.

I think Ukrainian and Armenian schools have the same problems, they fall short of children’s expectations. Have you tried to break into your schools with your method?

We are now working on creating projects for children because we understand that the sooner we start, the better our results.

Teachers have graduated from pedagogical universities (many in the Soviet era), where nothing has changed for years. The world has changed unrecognizably, and educators have not.

When I went to first grade, there were no phones, now we actually have a mini-computer, which is several times more powerful than the Apollo device sent to space and landed on the Moon. And that computer is accessible to everyone.

That is, the world is changing fast, and teachers and programs are not. Even in the textbooks of the last Ukrainian generation, we can find the myth of the “tongue map” when human senses are presented in divided segments (where supposedly we feel a salty or sweet taste in different parts of the tongue).

This myth has long been denied, as it has been proven that the tongue is not zoned, whereas that is what is still being taught in textbooks today.

And there are many other problems like this that can be solved if teachers are aware of science, do research and provide up-to-date information to their children, rather than what they learned years ago at universities.

Of course, I do not want to generalize, because there are also very good and active teachers.

The problem is not the teachers but the system.

Well, we cannot change the educational system on our own. But we can work with children, teachers and even parents.

If it is about balance, then, of course, the scientific content should be happy. It is important not to lose the child’s attention, as the child is surrounded by thousands of information sources and channels, apps and fun games.

They live in a constant buzz and in order to be able to notice complete and evolving information, it must be at least as happy as the useless fun they are attracted to.

That’s the difficulty of working with children.

But the good news is that we do not work in spite of the Ministry of Education, but jointly, though the state apparatus is always slow.

And why did we choose the format of a podcast and not video?

Long articles are difficult to read and watch, and easier to hear.

Longreads are very much needed because they allow the context to be presented. Whereas, short stories fragment what is said. And now we are witnessing it, short news is being dropped on our heads, and we are constantly hungry because short news does not allow us to understand the context.

Making long articles audible is a good step. After all, people spend a lot of time on the roads and this is a good opportunity to listen to the podcast. People also do the dishes, do housework, attend the gym. That is, they are constantly in motion.

Podcasts allow us to give information to people who are in motion.

Of course, video is easy to perceive and is the most popular format, but it limits the person with the eyes. You won’t watch a video while you are watching, but you can listen to a podcast.

In general, now the most precious thing is time. Everyone wants it to be fast, but without the information noise that causes overcrowding and makes us indifferent.

When we listen to podcasts, we do not feel that we are wasting our time because we are doing something else in parallel.

There is another important thing.

We know so much about each other through social networks that we sometimes feel the need to separate, focus, put in headphones, and isolate ourselves.

If you can watch a video with the whole family, then a podcast implies isolation. And that is especially important now that we know everything and are constantly in touch.

And it is at this point that podcast makers come into play that use the “you and I” format when the narrator and the audience are face to face.

The Fine For Not Wearing A Mask On Air, Free Speech And “Throwing Down The Gloves”
Nune Hakhverdyan
Critique