“If The Media Strokes The Head Of Society, Then It Is Not Media…. But A Comb” 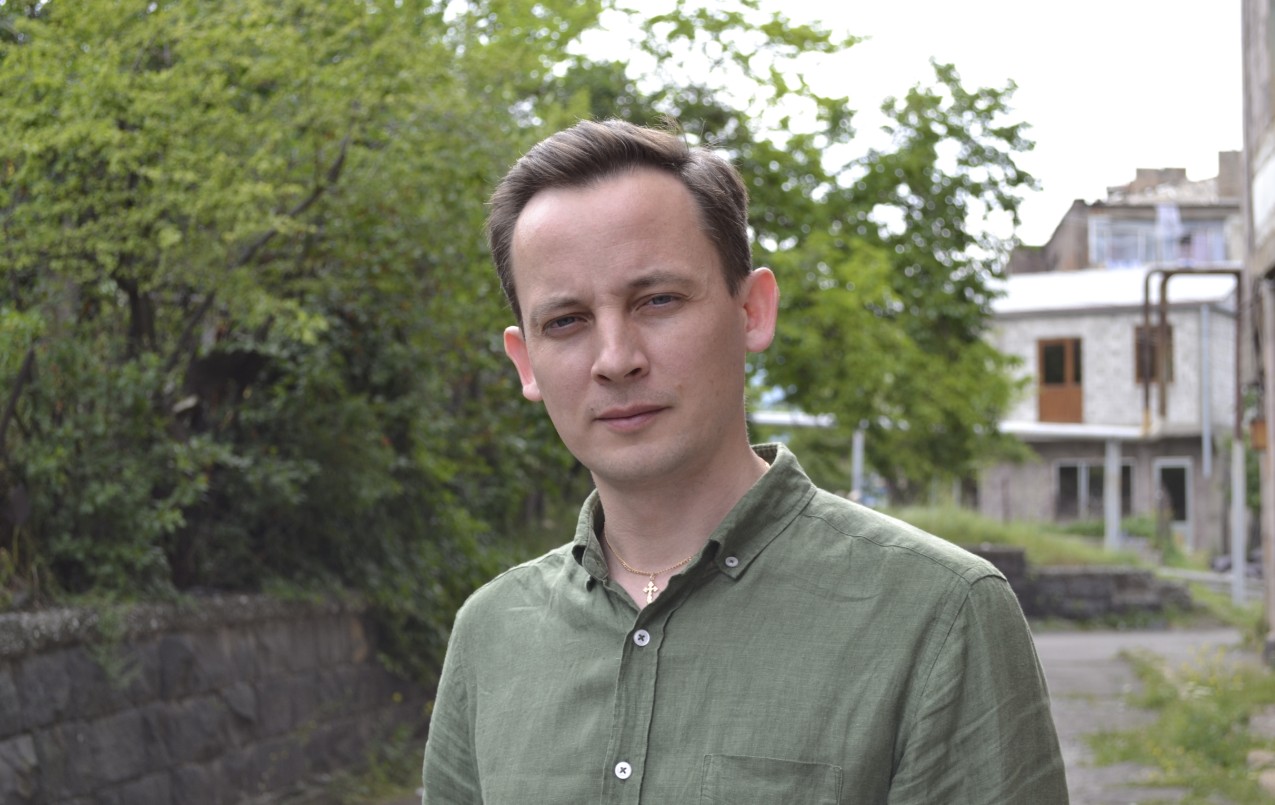 Media technologist and trainer, Sergei Yakupov, helps to create and develop information sites, manage news products and work with the audience. He is the author and editor of the mediamediame channel on Telegram.

At the invitation of the Media Initiatives Center, he conducted a training on “Monetization Models in the Media,” trying to support Armenian websites to swim freely in the digital market.

Sergei Yapukov is convinced that it is important to read the statistics of a website, as a good editor, as looking at the number of visits can predict what formats and topics are suitable for moving forward.

These are the numbers that allow you to develop models of distribution and earn money, helping you to remain an independent media.

What can be done to have a self-sufficient media outlet where you don’t have to worry about money?

There is an overall problem, there is no person in the media outlet that you could call a product manager.

There should be a person who views the site as a technology product, not a content archive. That’s where the development and monetization platforms of the site begin.

The problem is that news sites are created by people who have previously worked in the newspaper or other traditional media. And, as usual, they continue to think that they produce great content and people should consume it automatically. But this is not the case, the priority is in content distribution, the presentation.

Forms of distribution should be known sooner than the production of the content itself.

When you have great content and a website and the audience does not exist, then you have to go back and gather an audience. And in the meantime, the content is obsolete and consequently, its relevance disappears.

Before you make a website, you need to be sure of who it is for and where to look for the audience.

Won’t it turn out that easy-to-digest, mass, scandalous, yellow materials will be demanded?

Of course, a convenient presentation of content is a double-ended story. On the one hand, the magazine, website, news outlet, the brand begins to flirt with the audience which is a cheap approach. The audience generally needs bread and scenes (it has and always will be so).

On the other hand, there is a romantic idea that the media is an educational body. That is, it is an institution that not only informs but also educates and provides knowledge. And if we do just what the audience expects from us, not only would the media cease to develop but the audience as well.

We all want the media to be a means of developing human and civil society, even if it is quite pathetic.

The content cannot be a hundred percent reflection of the audience’s desires, that would only be what is convenient to consume.

In some sense, it’s reminiscent of the sacred discovery of the first iPhone. While no one could even imagine that phones could be without a button. In 2006, nobody thought that phones with touch screens would be very comfortable. The same is true of the media.

We do not ask the audience what it wants, but we do that which can change society. In other words, we spread information that can influence the mood and development of society (it doesn’t matter if it is evolution or revolution).

And in order to avoid stagnation, in the case of content distribution of the news site content, we must balance the audience’s wishes with our mission.

In post-Soviet countries, the media continues to be a tool for control. It is probably an attachment, at first to the ideology and to the oligarchy. Is it easier now to be positioned in the market as a free unit?

I believe that the media can live and earn money not by advertising, but through its audience. The audience can become the co-founders and co-owners of the media, not just a passive listener and viewer, whose head doesn’t want what it is given.

We are used to calling the media mass media, imagining a loudspeaker is placed on a tall column and all the villagers gather to hear whatever they are served.

Media is a pipe, technology, service.

And the journalists are the packers. They look for sources and the audience.

I’m sure that there will be no new technological leaps in the next ten years, everything is there – tools, platforms, phones, social networks and messengers.

Now the problem is to rearrange them, as the method for content consumption has changed. The media should be able to keep up with everything which doesn’t always work out.

The media is used to thinking that good or bad, it is still working and so there is no need to change anything. In fact, they don’t change, because getting out of their comfort zone is frightening.

In Armenia, we definitely ought to be familiar with what goes on behind-the-scenes in the media, know the shady owners, otherwise, we can go astray. It is irritating.

But that’s a good thing. Being irritated is a good thing. I can make a populist comparison and ask, where does a pearl come from? It appears when grains of sand irritates the oyster.

The media should irritate the public. If the media strokes the head of the society, it’s not media, it’s a comb. A comb that smoothes, beautifies and conceals.

And society cannot be smoothed with a hairstyle. Media is a thorn in society, which constantly causes worry.

Now, it seems that small media units are able to fight with giant corporations if they manage to affect the right wires.

It just proves that one can and should earn money not commercially (in many countries the market is not free, and so they are not free from the flow of advertising), but rather by working with the public.

Drip by drip collection is very effective. There are many examples of public support for the media, starting with the Guardian, which earns 30 million by donations alone, ending with a Correspondent website, which exists solely on funds from the audience.

For example, in Russia, a site that has suffered from Roskomanador turned to its audience and collected the fine in a short time. The site was convinced and proved that the audience could be called upon for support.

One person can come onto the media field and become influential, especially if they are an expert in any particular field. Simply a person from the street, of course, can prepare news, but they most probably will not succeed. Large media outlets have more chances because they suggest to the audience that the topics are more deeply developed (as an observer I don’t know anything about a topic, but by watching, I learn and become aware).

It is important that the site is prepared by people who are authoritative in their field. Even if the author is one, they can become a serious player in the media field. Moreover, they are not a competitor of large corporations, as they are in different markets.

Let me tell you something interesting. The audience and the advertiser will pay one-person-media more than they would a big company.

It’s easier to find money if you are alone?

Of course. The reader who gives money to the one-person-media knows exactly who to make demands from. If the media starts to work, the response will be instantaneous.

One-person-media is earning money with their face, and that face should be honest. And the big corporation wants money for a more abstract brand.

It is easier for the reader to give money, not to the conventional Guardian, which has a huge and respectable foundation and a large amount of money, but a small, local initiative since every dollar will be visible in the case of a small one. For example, it will become a text that hence the reader needed.

Will videos continue to be in demand?

Video footage on Facebook has slowed, views have dropped. I think the reason is that Facebook has discredited its videos into an automated mode.

But on other platforms, videos are a serious trend, though, of course, today there is a serious future for podcasts. Moreover, not news but topical, like series, interviews and investigations.

One-time products do not reach the audience because the amount of information surrounding us is too high. If coming across something one time you do not remember it, you need to create a habit among your audience to regularly visit the website. In some sense, it becomes a drug.

Why is Facebook important to us and other countries like us? No other platform has as great momentum and attractiveness for the media too.

Because we live on Facebook and we do not live on websites.

When I spoke with the editor-in-chiefs, I realized that everyone understood Facebook to be the main distributor of their website.

While it is not natural to drive everyone to their own sites. The media should ask itself, why do I publish materials on social networks?

Driving to their sites is not natural because it’s not the materials that gain meaning on social networks, but the loud and freely expressed thoughts (our thoughts aren’t so loud on websites, as it is a systematic and distinct platform).

And when newsletters open a page on Facebook, you also need to have a special person who works on the page without looking at the work of the website and imitating the website’s language. The site is just a source of topics.

Finally, journalism is the desire to reach as many people as possible, and by directing the audience from social media to the website, we artificially reduce the audience and justify it as an attempt to sell ads. In that case, we need to clarify whether we are journalists or merchants.

What should we do if we are journalists?

Have our super-interview with our Superman, who has been published on the website and repackage that on different platforms without a link (especially because Facebook doesn’t like links).

We are not advertising the site, but ourselves and our hero, aiming at expanding the audience. It is simply about the coverage and not traffic.

Traffic, in fact, is a cunning dual thing, it does not reflect reality because you can pay and get to the audience, it’s just that that audience will be made up of unnecessary people.

And the real audience is a community that you build around your own brad. And even if your audience does not agree with you at all, they are interested in your emotions and values. After all, the media pushes the audience not to be indifferent.

It’s worth remembering that the site and social networks are quite different. If you’re just copy-pasting for the site’s stuff, do not be surprised that you are losing your audience. Social networks are not for reading articles, but to encourage interactions and spur the community, provoking conversation.