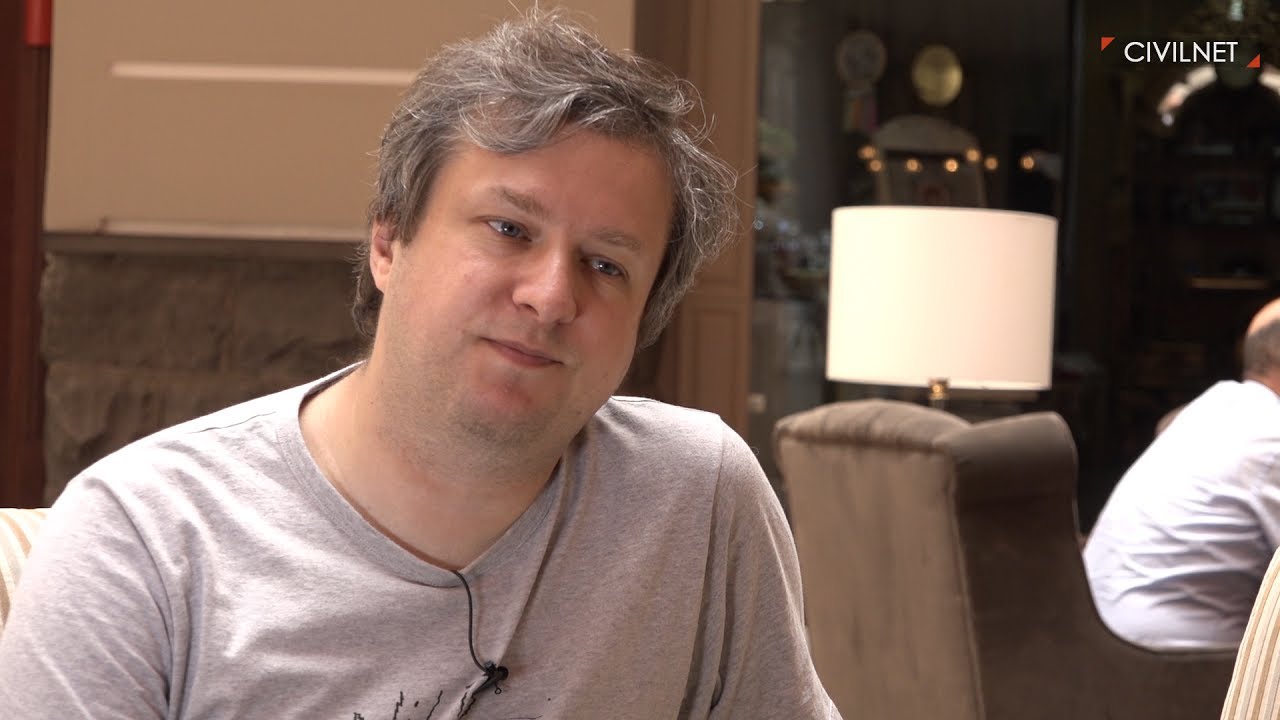 Film critic Anton Dolin seems to manage to do everything: write books and articles, send reportages from the world’s film festivals, host programs, give talks, and, alongside all this, be an active netizen.

The discussions taking place on his Facebook page are always interesting to follow, since they truly are discussions, where Dolin isn’t too lazy to respond to almost everyone.

Visiting Yerevan upon the invitation of the Golden Apricot Yerevan International Film Festival, Dolin had a few meetings with local residents. He pointed to viewpoint as an important component of good criticism: “The critic must try to examine the view from as high a position as possible, then sink as deep as possible. In that case a good investigation will result. Otherwise, he will flop around on the surface of the water, which is a fun but meaningless endeavor.”

The flow of texts online forces a fresh reassessment of the role of literary magazines. And Dolin, editor of Russia’s prestigious Iskusstvo Kino (Cinema Art) magazine, is confident that magazines set the standards.

“The texts published only online do not inspire confidence, since they are many and uncontrolled. The internet is like a great heap where the competitive field is very wide and disorderly, and it’s hard to convince the reader that your text is good. That’s why literature cannot exist without magazines. And it doesn’t matter that readers read on e-devices. What’s important is that the magazine decides and guarantees what is worth reading.”

Long-term Iskusstvo Kino editor, sociologist, and film critic Daniil Dondurey was sure that cultural codes are best deciphered from film and the media, and now after Dondurei’s death, Dolin is trying to give new breath to the magazine, which, in fact, will be more than a magazine, becoming both an offline and online platform. Ultimately, film reflects life much better than any other form of art. And the choice of films is something akin to a letter of recommendation.

Iskusstvo Kino has bold plans. What is especially important in the work of modernizing the magazine?

It’s no secret that in the last two years, the magazine experienced not good days, and it was obvious that if we don’t change anything, the magazine will die a natural death. No one in the editorial team would want that; we want it to live and find new readers.

And as the unbelievable success of crowdfunding has shown, there are new readers. And they are not few.

First of all, the magazine must stop being just a magazine. We need to create a rich online platform, and then open a path to the world — through film schools, talks, and film screenings with commentary.

That is, to not limit ourselves only in the pages of the magazine, but to come out in real life.

I want Iskusstvo Kino to become a full cultural platform, as a website and as an attempt to concentrate on different events in Russia.

From my experience I know that in every city in Russia there is an audience who is ready to watch art cinema and debate it — simply there is often no initiator. We’re ready to become that initiator, if everything goes well.

And naturally, the magazine has to change from inside: the template, the design, and so on. In short, we’re trying to rise up from a kneeling position.

After that last turn of phrase, I want to ask, how have the cultural codes changed in recent years?

The codes constantly change, but of course some things are unshakeable. It’s always been like that.

The rapid changes are related to new technologies, even the quick updating of every device; the continuous wave in the world of cinema and soap operas; the spread of the internet; and the entire world’s unstable political situation.

Culture simply reacts to everything that happens in the political, technological, and social worlds.

And our task as journalists and critics is catching these changes in the air. We try to predict, analyze, and in short, make sense. And accept that cinema is a small part of this big world of ours, a reflection in a drop of water, and not a universe that exists separately.

How important for you is the online debate?

The online debate is important not because I consider it a mission. On the contrary, I’m worried that in the eyes of the public I’m presented as a micro-celebrity, a well-known journalist, who can be seen also on Channel One.

And thanks to that, I am at once perceived as an authority figure, who expresses his opinion on any topic.

Naturally, I have my opinion on all issues, but online, especially on Facebook, I prefer to present myself as a private individual, who can not censor himself, saying what he wants and using the words he wants.

But that’s an illusion…

Of course it’s an illusion but a pleasant illusion, which I try to maintain, since I can’t and don’t want to consider that Facebook is a media outlet. In that case, I would have to choose my words more carefully and ensure that I don’t break a thousand and one rules. I would like to be free of all that, keeping only general ethical norms.

But for me Facebook is very important as a means of direct communication. Such direct contact doesn’t exist in traditional media outlets. Perhaps comments appear beneath some articles, but all the same, you won’t find an author who persistently replies to everyone who comments.

I reply on Facebook and not on Meduza or Mayak. And it is through my replies that I try to maintain the precious illusion that I’m a private individual. That is, I speak to people like an equal. And like an equal I debate and try to convince or push to change their mind.

I have many interests in life, but I will never, for example, professionally write about politics, music, architecture, or literature, though I’m a literary critic by profession.

There you can remove your professional mask and put on your dilettante mask, and it turns out that many internal barriers that you’ve set for yourself disappear.

Can you write about the same thing in a different way, depending on the publication where the stories are published? Does that transformation happen easily?

Actually, that’s not an exceptional skill; I’m obliged to do that, since the audience is different.

If your colleagues ask you about the nature of your work, you undoubtedly will answer one thing, and to the same question asked by your mother, something completely different. And to a child’s question, you’ll try to find other words. Definitely you won’t say the same thing every time; rather, you’ll try to find a new means of communication, depending on the type of conversation partner.

It’s the same in my case. My conversation partners are different: radio listeners, Meduza’s audience, readers of my books.

Do you agree that, all the same, in terms of recognition, television is the primary medium? It’s enough to appear on screen, and you become famous.

Unfortunately, that’s true. But you can’t do anything about it, besides try to turn that fact into good. That is to say, use television as an opportunity to spread opinions that aren’t evident.

That is, you believe that you can use television and be used by television?

It’s a reciprocal process; I’m also not against being used. What’s important is that they can’t spoil or change my remarks or make them trivial.

Ultimately, I am the one who opens my mouth and speaks. They’re my words, my thoughts, and that’s how they’ll remain in all circumstances, even if they’re removed from television.