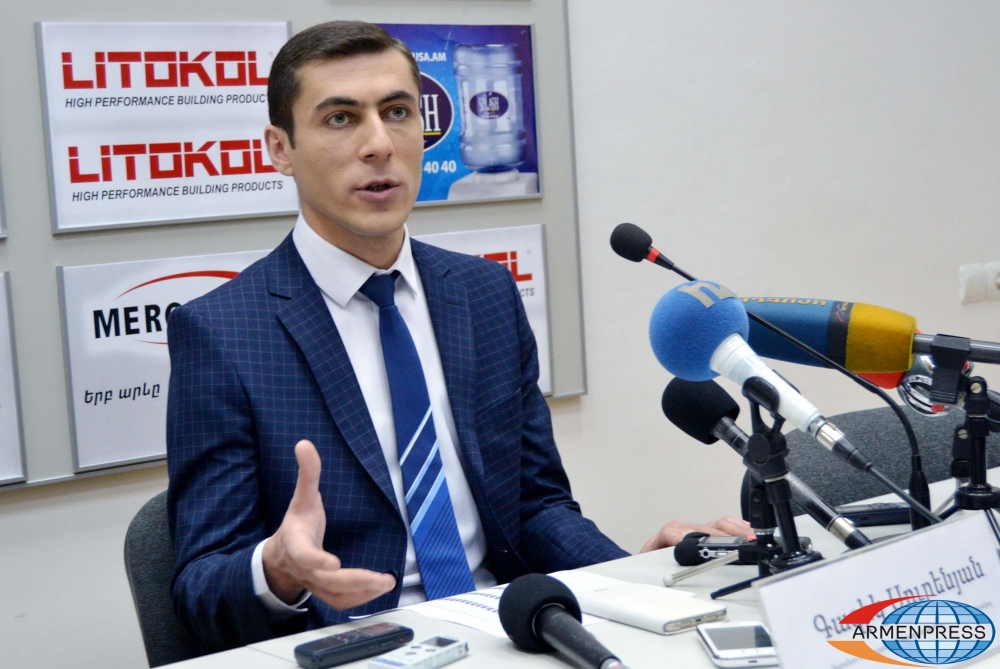 The weather forecast is usually on the tail of the news feed, as purely factual and communicated with a clear vocabulary (atmospheric pressure, relative humidity, temperature changes and accelerated wind speeds).

Weather rarely comes first in media and is even more rarely supplemented with emotional components. If no unexpected and shocking natural disaster occur, the weather remains that way explained as a layer with dry and with stable words, which we perceive with the tip of our ear, as a mandatory aspect of the daily news, but not the primary aspect.

Meteorologist Gagik Surenyan is using new language for climatic factors connecting everyday life. Not only does he describe the weather on the television screen, he is also very active on social networks, especially Facebook, where he has over a hundred thousand followers.

Gagik Surenyan very quickly reacts to any news that has anything to do with nature, finds the key to it and interprets the various dimensions, beginning with daily life and ending with existential questions. And he does that with a combination of scientific terms and network-friendly communicative language.

The meteorologist speaks about the weather in a an interactive way, answering questions, asking questions, not only spreading news throughout the network, but also collects them from the network.

Deputy Director of Armenia’s MES “Hydromet” service and the head of the Weather Forecast Department, Gagik Surenyan’s audience trusts. First and foremost they understand, later communicate with him and as a result, trust.

Many are convinced that you can never be wrong.

But if you have noticed, in the last few years our predicted forecasts have come close to 100%. In other words, the forecasts of “Hydromet ”are indisputable. In the course of one year we have had at most 1-2 serious mistakes, and that is a very high indicator. We are rivals with any in the world, even with the most prestigious hydromet service.

To communicate the weather you use some incredible tools. It was hard to wait for that kind of dull weather forecast to be turned “social.” That was obtained due to what?

Either as a result of “Shant” TV or my publications about the weather on the internet we are receiving a great response. And it is all becoming greater thanks to the accurate messages of “Hydromet.”

Of course, if people accept, believe and trust in one person, it’s a combination of many factors. People will not listen to anyone that way or pay attention to what they say if they do not trust.

But our large institution’s reputation is not based on myself, we have incredible and experienced specialists (more than 630 people work in “Hydroment” service), simply put I present most of the forecasts, and for that reason I am more often appearing in the spotlight.

In the TV field I am the only specialist who has presented and explained information about the weather with professional language. Usually, people have done that who generally have no connection to the profession of a meteorologist, and often incorrectly point out north and south on a map. They are actors and singers who essentially were reading texts about the weather, without understanding the essence well.

And the TV viewers can see and understand this very well. After all, besides the text the gaze of the host is important, the body language, which will create a rapport between the audience and broadcaster.

Generally it is very interesting to a person to know what is happening in the environment  where his/her organism is living.

Our organism is in constant contact with the atmosphere. It is the sphere which is correlated not only with a person’s physical activity, but also mental activity. Therefore, by having high-quality comments and publishing a high rate of accurate forecasts, “Hydroment” service has won the trust of the population.

How do you manage to release photos of Armenia’s different regions so quickly on Facebook? Along with the snowfall they appear on social networks and immediately make the situation visible.

The photos are sent in by the people. I receive them and publish them on my page. I do that for a simple reason, if a person is preparing to travel to the regions, the pictures will inform them of what kind of situation the roads and the final destination are in.

Of course, there is a literal prediction, which states that even though the roads are icy and dangerous for driving, reading about it is not as convincing as seeing it. In that case, a person will have a more realistic approach to climate conditions and better evaluate them. Ultimately, a question is given: is it worth it to go and what type of condition should the person’s car be in? Perhaps is it necessary to change the tires?

Household comparisons and predictions (for example, changing tires or wearing a hat and “chulkis/stockings”) are key to your person. Do you feel that you are becoming a media “star”?

I will again repeat that it is dependent on me being a specialist. Along with the fact that other than myself no employee of “Hydromet” service has come out to the media. We have bright specialists, who, however, do not communicate with a wide audience. I have heard that people call me a star.

You also know quite well that if the person on the screen is not pleasant for the viewer, the viewer will not listen to him.

And the post about “chuliks,” of course, it was a joke. Some people do not like that “Hydromet” service makes announcements that the weather will get colder and that there will be snow. Mainly female representatives are complaining that we are constantly announcing bad news. I then made a post that our announcements are not made for you to decide between wearing “gitri” or “chulki” but rather the intention is to warn people, so they do not fall into trouble.

We can make warnings a thousand times about unfavorable weather conditions, but still, there are road accidents and casualties. The main causes of accidents are kapron tires, which do not help in icy road conditions.

Our work demands maximum immediacy. It is necessary to be in a constant flow of information, because the information is often changing, processing. And I am trying to be operative.

You also know that Facebook can now drastically spread news at lightning speed. People only watch TV at home, and are on Facebook anytime, with mobile apps.

Generally, throughout the entire world social networks have a big role in terms of spreading information. And everyone understands that at the present time immediacy is the greatest work achievement.

The weather is now beginning to occupy an important place in the media, it is enjoyable for journalists to write about that, come to your conferences, link to your Facebook page. One wonders, why?

I think that journalists often cover the weather because they also understand the seriousness of the situation. In one month, I participate in 2-3 conferences, which are usually about important issues, for example, the expected frost. And journalists, of course, want to do it in such a way, that the news reaches the population fast, and so the villagers know what do with their economies.

And why is it the case that cold and frost always cause great damage to crops? Do other state agencies: ministries and committees, not cooperate with each other?

Of course, they cooperate. I generally do not have the right to evaluate the level of bad or good work by other professionals and organizations. I am an evaluator of only our work, but I myself have many times become a witness of how the Ministry of Agriculture has responded to the alarm of frost: not only have they gone to the fields and lit bonfires, but they also send telephone messages to the population.

We have to also take into consideration that we can only accurately predict the weather conditions of five days, as in only during that time the accuracy level reaches 98-99%.

Is there any type of divine aspect in predictions, since you work with something, which still does not exist, but you know that it is coming. The forecasts are both science and mysticism.

My dear, everything is much more clear. I compare our profession to medicine, since we have work with the same terms of scientific etymology: with diagnosis and prognosis. The doctor researches our organism and diagnostics of how our organs work, and meteorologists research the atmosphere and discover how it keeps us. In scientific terms, we are moving in the same direction.

And do you have any complaints with the media, or do you feel comfortable in that field?

There are a lot of responsibilities in the media field and it is very stressful work. Let me explain why. A few days ago we spread a special warning about the expected snow, precipitation, storm, and bad weather conditions. Now image what would happen if our prediction did not turn into a reality.

A lot of resources are spent (people change their tires, municipal buildings transport sand and salt to the regions, they prepare the technicalities), but suppose suddenly our predictions are false. For the forecaster that is a serious cause for depression. We are in a state of tension until the moment when the forecasts are proven.

And they are not one or two forecasts, they are continually being made, and in our entire lives we do not have one moment of peace and are in a constant state of tension.

You are constantly on needles…

Having to work with nature is not a game or dance. And no matter how good of a specialist we are or how much we shine in our work, we are not gods.

Deviations are always possible, because the processes that happen in nature become weaker, slower, stronger, dates are played with, and so on.

And by understanding that, we live and work in a stressful situation. Until the forecast falls between the predicted range there are always unpleasant expectations.

If in the coming days it snows in Yerevan, will Yerevan be ready? Or like last year will the roads be closed and will the transportation stop?

That question should not be addressed to me. My work is to warn and disseminate. I do that and whether it is with my television or different websites and social networks, I attempt to to reach as many people with the news as possible.

Finally, there are specific official messages, which are sent by AIM to interested bodies. Of course, as an Armenian citizen I do hope that the city will be prepared to deal with the snow, but that is just my hope. I cannot do more.

And when will snow come in Yerevan? Let’s hope that the city will be prepared to accept that beauty.

I can confidently state that in the coming week there will not be any heavy snowfalls.

Snow is my favorite atmospheric phenomenon. I remember during the final days of last year, due to the infiltration of a powerful cyclone, there was a heavy snowfall in Yerevan, and the thickness of the snow reached 60-70 cm. Of course, it was a predicted and described process, but at the same time, it was a real fairy tale.