Public Radio: “We have obligations to the state, but we work for the public” 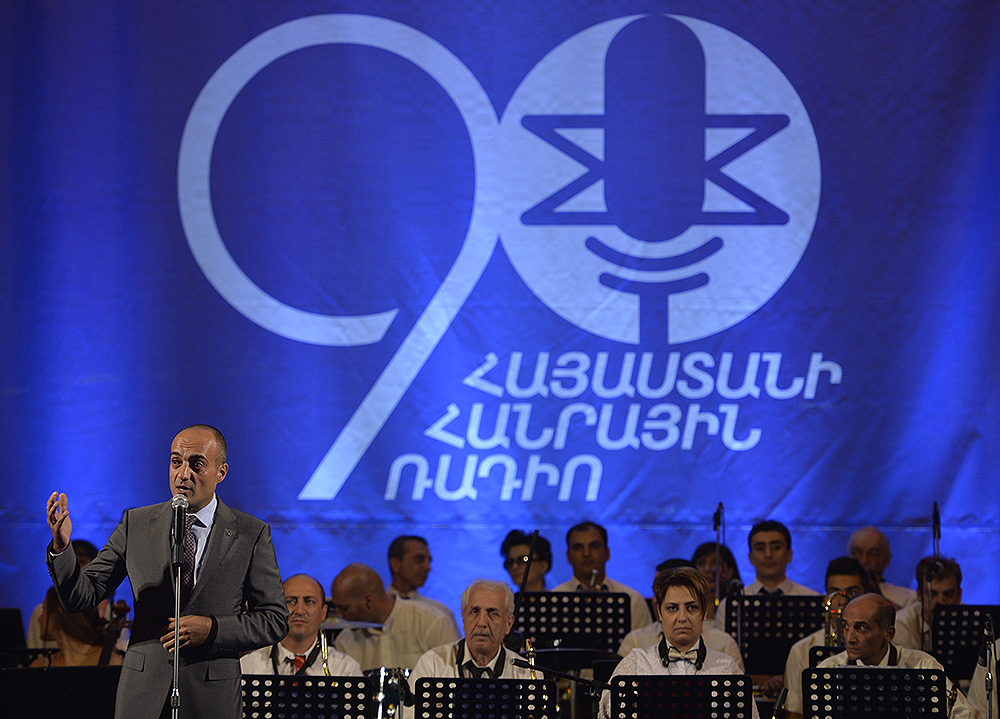 The Public Radio of Armenia has completely changed the content and format of its programs and since Sept. 1, 2016, has begun to broadcast also digitally. Public Radio Executive Director Arman Saghatelyan describes the new season as a return to live broadcasting, since programs that broadcast live and involve feedback have significantly increased.

“Live broadcasting, besides being effective, also has an economic function. There are lower costs associated with it, since there’s less editing, production and other work. A different matter altogether is that highly qualified staff is required,” he says.

The organization had a goal of raising the role of public radio in public life. Saghatelyan says henceforth all programs will be archived for life. If at one time only the so-called “gold fund” was preserved, well now programming in its entirety will be kept (digital drives have made this work much easier).

Also planned is to store the currently dozens of Armenian radio stations and programs around the world on one server and create a so-called pan-Armenian radio network. This will help the various communities be informd of each other’s day-to-day activities.

Public radio is trying to become a connecting link. That is, to encourage the natural urge to ask questions and most importantly, expect answers.

People want to see and hear themselves in the media. Their concerns and issues — and not official information or the flood of music. To what extent is public radio ready to meet audience expectations?

First let me say that we conducted a public opinion poll, and we developed and drafted our marketing plan according to it[s results]. Ultimately, media management is a science, and we didn’t take our new broadcasting policy from the ethers but seriously prepared it.

I am deeply convinced that the main purpose of public radio is to convey important information for public life — which implies to inform, educate, shape cultural taste, perform the epistemological functions of modern relations, and offer consulting services.

Currently on the air are socially significant multi-genre programs: coverage of the healthcare sector, programs directed to villages, matters of rights, consumer issues, social and financial advice. That is to say, all that which comprises an integral part of modern relations.

We live in a reality where the proper authorities don’t always adequately carry out information activities. People are often confused and are uninformed of the functions of some institution or another in the country, their rights and opportunities. Very important areas are overlooked.

Perhaps it’s because advertising and impartial information are often made to be synonymous.

Advertising has to bring with it also a clarification of secondary problems. The consequences of the use of any service can be calculated. For example, lending is a very serious issue now in Armenia: people take out loans, not having a good idea of what will happen if they don’t pay off their debt in time. Or not realizing the [extent of their] responsibility, they become guarantors of other people’s loans.

In free market conditions, explaining the nuances of documents and consumers’ rights to wide segments of society is necessary. Of course, there are agencies that are obliged to establish control over the quality of goods sold and services offered, but besides state institutions, there also has to be public oversight. And, of course, the culture to access it all.

Public television and public radio are institutions carrying out exactly these functions, which, however, opt to meet the demand for entertainment.

I disagree. Public interest is the clear vision that currently guides public radio. Radio also has quite a pronounced advantage: the opportunity for direct communication. Television wields this tool with difficulty, since it’s associated with a number of infrastructure questions, while radio is more immediate.

The bulk of public radio’s new season of programs not only is broadcast live, but also has the opportunity for direct communication.

Experts and officials on Public Radio’s live broadcasts get questions and answer them, informing people of their rights. It’s been observed that the courts have become an accepted platform for solving problems, as it is in the civilized world. And there’s a demand to convey knowledge and skills to the public, which will help them protect their rights in the courts, appeal decisions, and so on.

In general, it’s now difficult to get your bearings in different levels of relations without the help of an expert.

Isn’t there a lack of specialists and experts?

I think that specialists aren’t few in number, it’s just that sometimes you have to explain to them that one of the elements of socially responsible professions (say, law or healthcare) is also public outreach.

Of course, highly qualified lawyers or economists have a dense work schedule and find it hard to have the time to provide explanations, but it’s necessary also with them to give guidance and urge them to perform social functions.

There is a range of experts that upon the media’s invitation, constantly speaks, comments, and, by and large, says nothing. How is the selection going to be made in the case of Public Radio?

Speaking on public radio will be people who are experts, have experience, and are answerable to their sectors.

We’re doing programs, for example, with the agriculture ministry. And given the opportunity to provide feedback, the residents of a village can raise issues themselves, take the opportunity, and ask questions to those governing their sector.

Music has notably decreased from the airwaves. Why is that?

If until now, one third of the airwaves was unrconnected music, henceforth it won’t be like that. Music will comprise 8% of the airwaves and will be broadcast packaged — only through music programs. That is, we’re going to have an additional epistemological burden. This way, development will take place, and not just the consumption of voices.

In effect, public radio is getting ready to become a serious competitor in the media industry.

Not only has public radio the potential to compete with other types of media, but also I’m sure the others will compete with difficulty with Public Radio. Radio has genre advantages (including also toward the internet).

We’re now available through satellite, internet, and various mobile apps. The internet by itself is nothing (just a tool), the value here is the existing platforms. We’ve now partially equipped our site and will try to move forward — we might also get to a satisfactory level of visualization. Of course, that depends on financial abilities. We’ve now completed the first, substantial phase with honor.

Armenia is one of the world’s most liberal countries in terms of the dissemination of information.

If the economic area is not liberalized, that is, if shadow [economy] laws and arrangements operate, the media’s being free is questioned.

That’s a very difficult question. Of course, economic development has an effect on media freedom. And the statement that “the media in our country is free but not independent” itself perhaps has economic causes. The media can be free, but it’s unable not to be dependent on some financial sources or another. Consequently, it becomes restrained in its decisions.

Of course, there may be a clash of interests and even confusion. But the purpose of public radio is serving public interest. The law mandates to disseminate official viewpoints and positions, to turn our attention to the information activities of some state instiutions or another. But nowhere does it place a restriction that we’re obliged not to disseminate alternative opinions.

That is to say, we have obligations to the state, but we work for the public.

It turns out that there may be opinions against state decisions, but there may also not be.

That’s a matter of professionalism. I think, no one has yet ruled out the principle of balanced information.

Our aim is just that, that issues containing conflicting interests (though between different groups and the state) appear on our airwaves, become heard, discussed, and ultimately, grounds for cooperation be found.

The information field has its anatomy (the structure of media units) and physiology (the creation, shaping, and dissemination of flows of information). And the practice of independent experts plays an important role in the processes taking place in every grouping.

Why are many state decisions perceived negatively by the public?

A fact by itself doesn’t mean anything; what’s important is its perception. We don’t have an established practice of independent experts, which in the case of normal relations, should have an impact on the final perception.

In our country, political forces themselves often take on the role of independent experts, trying to shape perception for themselves, which is sometimes also distorted.

Ultimately, the media must keep state institutions vigilant, not allow state-level decisions to be presented only through advertisement or rapture.

Please, listen to Public Radio. And you will see what issues are raised, who are speaking, and how the public and experts participate in discussions.

Anyone can call the radio and ask their question. We bring to the conversation people in charge of different industries, regardless of whether they’re credible or not, and prompt them to explain, clarify, and bear responsibility for decisions. Responding to the public’s questions arises from their interest, since if they don’t do it, others will and from a different viewpoint.