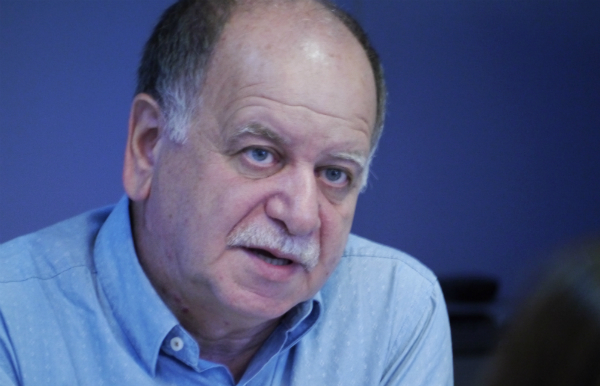 Cultural sociologist, film critic, and chief editor of Cinema Art magazine Daniil Dondurey is one of those rare professionals who knows everything about television and even more. For many years he has been studying television’s multi-faceted signals and their impact on TV viewers.

He is sure that almost everyone underestimates television’s codes and significance. And it seems they’ve silently agreed that television can be ignored and removed from the agenda. Meanwhile the reality is completely the opposite.

Television content dictates behavioral norms to the audience, which governments successfully use — mobilizing in some matters; quelling massive fears and aspirations in others.

According to Dondurey, the issue is that there are few experts who can “read” and analyze the messages transmitted from the screen — which is especially needed in Russia, where watching television is a leading occupation.

You say that television plays a significant role. Is the situation changing now alongside the development of the internet?

Sociologists around the world have identified 500 occupations that are common to all: beginning from sleep and ending with handiwork. That is, everything that a person’s life is composed of. And it turned out that the absolute leading occupation in Russia is watching television. This means that of those 500 occupations, none (working in the office, interacting with children, engaging in the various types of entertainment, and so on) take away as much time as sitting in front of the TV. Not even sleep can compete with TV viewing.

And if your acquaintance says he doesn’t watch TV at all, it means that his mother or grandma watch it three times more. For example, on Sunday they spend not 7, but 10–11 hours in front of the TV. Women comprise the majority of TV consumers.

The soap operas alone (the main cultural product) are watched by 105–107 million people daily. I assure you no other occupation or activity can compare with this figure — it’s an exorbitant number.

Last year the daily volume of TV viewing increased from 3 hours and 57 minutes to 4 hours and 20 minute (this figure refers to all citizens of the Russian Federation over the age of 4). In 2014, people spent over 600–900 hours watching news and analysis programs; that is, they watched 34–40 minutes of TV a day.

And they watched news. It turns out that every person wasted one month within a year of his life watching television.

Can we say from what and when Russia’s widespread “televisionization” began?

Of course people have always watched a lot of TV, but since TV channels began to seriously engage in fears, threats, and mobilization, the amount of time spent in front of the TV increased (the addition of the aforementioned one month). People began to watch not soap operas (which they always watched) but news programs more.

Yes, the news are soap operas for many. Ultimately, everyone lives with their fears. Internal or displayed, familiar or abhorrent, all the same, they are fears. And television learned to direct and condense those fears.

Russian television, using unprecedented and powerful means, transformed Russia’s entire semantic space. Of course it was preparing this since 2013, when protests happened in Moscow, but it secured the spotlight in 2014.

I want to stress: television creates not a product but content. I’ll even say it more crudely: television produces and manufactures mass perceptions about life. And this is humankind’s main production. No other sector can compare with television, and the internet still plays a secondary role.

They are manufactured just as, say, this pen in my hand. These perceptions are created in the virtual world and consumed in everyday life. They’re about everything: Russia, its president, the US, about how we’re going to live, go to war, eat, experience hunger, and so on.

Television is not a mass media, it’s not even a means of mass communication, but everything, plus the preparation of chief cultural matrices and codes, with which the audience assesses itself and the world around it. It also draws models of the future and puts behavioral practices to work.

You understand, television has greater significance than the economy. The cultural matrix spread by television, for example, permits corruption. A person can be shot for taking a bribe; regardless, it won’t change a thing because the cultural matrix permits bribery (especially to officials). This is conveyed by TV programs, talk shows, soap operas.

Russia’s cultural matrix is closely linked to the criminal and prison life, and it’s no coincidence that the important thing is “to live with understanding” is preached.

And this works because the mechanisms of life are explained clearly and understandably to everyone — unlike the intricate voluminous laws’ thousands of paragraphs, subparagraphs, and provisions.

What sort of mass perceptions does Russian television reinforce?

You know, “fascism” historically has been a terrible word for us — even more terrible than profanity. But now every time from the screen we hear Kiev fascists, liberal fascists, fascists in the Rada…

The semiotic significance of this word has shifted. And what develops is a subconscious understanding that the meaning of the word is no longer related to defeated German fascism. It is already in a completely different place.

In general, the choice of words used and constantly repeated in the media is very important.

See, the victory of the Great Patriotic War was celebrated, but very few noticed that the war is not talked about now — not even the word is said. Only said is “victory.”

But by stopping to talk about the war, we ignore the two most important ingredients for victory. The first are the victims: Who died? Who killed them — we or the Germans? How did it happen? At what cost? The second ingredient, in my opinion, is vital for Russia today. We’ve always lived with the principle “as long as war is avoided,” but now this famous line is ruled out.

It’s been erased from our minds. It’s no longer so: we subconsciously agree to war and are ready to go to war. Of course this is done delicately, though programs and talk shows. It’s a method.

All this generates very serious transformations. And underlying this is the underestimating of the production of mass perception. One of these, for example, is distrust.

In Russia, 71% believe you can’t trust others, while 49% believe you can trust only your own family. How can you have free economic competition and work with colleagues when the majority of the population doesn’t trust [others]? This is a system doomed to failure, which originates from cultural message-signals.

People not only don’t grasp, but also don’t pay attention to the multi-storied and multi-layered work done by the press and journalists. Journalists get assignments on what to talk about, what to be silent about, and how to deliver.

For instance, our cultural matrix has been woven such that the state has become synonymous with the country, homeland, nation, language, and culture. And if you’re against the state (this government), then you’re against everything, including language.

Let me cite some statistics: 72% believe that information that harms the state does not have to be broadcast on public airwaves. That is, it’s ok to be silent.

42% believe that the borders can be closed and the state can be defended from perceived enemies.

Basically, opening the borders and eradicating censorship have not been instilled in people’s consciousness.

Probably a special plan to sober up from television is needed. What can help?

Two preconditions largely contribute to the perception of sobering up. Information providers have to lose their mastery and logic, and do more. In that case, the audience will begin to doubt that everything is not as right and proper [as they believed].

You understand, a person is simply unable to receive contradictory information on one subject, phenomenon, or account for a long time. One of the viewpoints must be considered more superior than the others; otherwise, you won’t understand which behavioral norms should guide you.

Russian TV channels are interested only in Russian audiences. And for this reason, the channels are forced to situate any account in a context that will explain to Russians what is happening — immediately and once and for all. Television can’t allow the audience to hesitate or doubt.

Doubt is specific to smart people, but the TV channels don’t need smart people, since doubt implies thought, analysis, and eventually questions. And when a person is confronted with a question, he tries to seek, compare, and understand supplementary information….

Russian television does everything for the audience to believe immediately.

And if the Russian TV channels work not harshly but delicately and intelligently, they can achieve any goal.

I want to stress that, of course, people are not stupid — don’t get the impression that people are complete idiots. Simply that tremendous and diligent work in brainwashing has been carried — to eliminate the cognitive dissonance.

I say this quite harshly; in reality, this is done very delicately. Even the creators [of this reality] are terrified because the way out is obvious. There’s no military solution; probably the only solution is political, but this too is almost impossible for the regime.

Can we expect a fresh and sobering flow of content from film?

Television is completely “cleansed”: inadmissible content simply cannot creep into the airwaves. Of course, sometimes opposition content also appears, but its dose and context are also permitted and tempered. The amount of airtime, vocabulary, and individuals from the opposition are agreed upon.

Whereas film is more free. If a film director is talented or experienced, he can say whatever he wants.