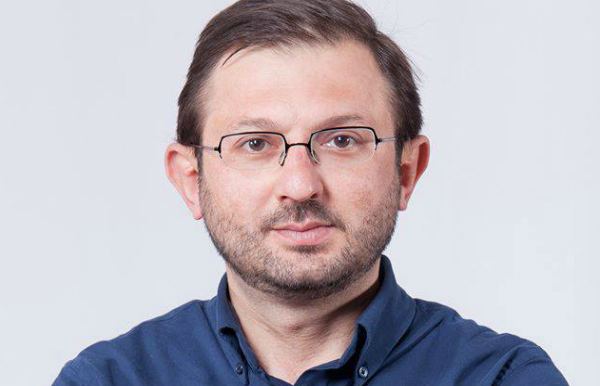 Yerkir Media’s News and Political Programs Director Gegham Manukyan believes a media organization’s independence is conditioned first and foremost by the position of the journalists representing that organization.

According to him, not hiding the finances that ensure the media company’s existence is of little significance. Manukyan expects that television advertising, which has been on a downward trend this last year, will eventually become more expensive and will go from being political leverage to becoming a business in its own right.

The first and only sales house in Armenia launched last year. Did Yerkir Media, which is not a part of it, feel the change in the advertising market and did it perhaps suffer losses?

Of course there were losses and quite substantially so. Naturally, it’s more beneficial for an entrepreneur to advertise with the [TV] stations that are part of the sales house than the other stations.

Added to this was the deteriorating economic situation in the country. Advertising shows this quite well. If one or two years ago, advertising were, say, cafés, shops, small manufacturers, well now these are very few — practically non-existent. Working in the advertising market are mainly major companies, and they, in turn, have reduced the amount of advertising.

The advertising market has changed greatly. Of course, everything wasn’t good in the past either, as it didn’t operate according to marketing rules. If, say, in his ad for water the client definitely wanted to film his girlfriend, then the ad stopped being an ad. Or, a café working in Vanadzor insisted its ad be shown on the public broadcaster’s channel [which has nationwide coverage], though the number of visitors to his café wouldn’t increase as a result of that.

In fact, ads that are logical are few; much is politicized, since the businessmen are political figures. And if there’s a doubt that the ruling authorities might be criticized in a given program or news broadcast, then they are warned before airing the ad. The interrelationship between the media and the authorities was one reason that advertising is considered something akin to financial assistance.

The ad on pension reforms, for instance, has zero effect, since it includes an actor who plays a con artist in a soap opera. That is to say, the three-minute ad commissioned by the Central Bank actually doesn’t serve its purpose. It’s interesting, that ad was shown on TV channels that weren’t criticizing the reform.

But in the last few years it has been observed that every businessman is playing his own game — without taking into account the fact of being included in a political party or other structure. It’s expected that the cost of advertising in Armenia will finally go up and advertising truly will become a business.

There was an idea to establish another sales house with those TV stations that are independent players in the advertising market.

I doubt that will happen, since the TV stations have very different business interests. Kentron TV, for example, doesn’t have a problem of getting money, while h2 [the state broadcaster’s second channel] has a completely different angle.

Of course, a sales house is a good idea: when a certain amount of financial flow is ensured, there’s more time for doing creative work.  But now we’re forced to allocate a significant part of the day to looking for advertisers.

A situation has been created whereby television news viewers expect a new outlook first and foremost from Kentron TV and Yerkir Media, which have political party backing, and, unlike other stations, don’t particularly hide this fact.

A media organization’s independence is very relative. Yerkir Media, for example, is considered a partisan channel, but in fact there’s no interference from the political party [Armenian Revolutionary Federation]. I think much depends on the people who work at the television station.

There cannot be a free and independent press. The most free press today is the one belonging to a political party because it clearly states who’s financing it. Whereas most of the pages and subjects of the so-called free press are sold, and consumers immediately understand who is paying for them. It’s the same with hidden advertising content, a part of which is broadcast as news, while the other part, as a supplement.

How do you see the future of television?

Traditional television will no longer exist. Since 2006, when Yerkir Media began broadcasting on air, it immediately became clear that we also will have to migrate to the web very quickly. And now we work not only on air, but also on the website.

Television will transform, becoming a screen icon, where there will be weather forecasts, currency exchange rates, and news tickers. That is, everything will appear on a single smart screen and become an image.

Every story is alluring when there’s an image or a visual segment. We all click more often on a news story next to which “video” is written. The video allows you to see it with your own eyes. Live streaming becomes important.

Yerkir Media neither produces nor airs soap operas. Is that based on principle? After all, soap operas have high ratings.

First of all, you have to understand what your channel is for and why you’re at that channel. If I picture myself outside of the news, I wouldn’t have anything to do with television (I would become involved in Turkology).

Our television company was founded with the purpose of broadcasting news and information programs. That is, we don’t enter the competition of producing soap operas. In my family, for instance, there are conflicts around soap operas. I can’t force my children not to watch soap operas.

Soap operas influence children’s vocabulary and perceptions. I myself monitor soap operas, and I see that the messages they convey are heinous. In Bulgaria, for example, they took the head of the public broadcaster to court for showing Latin American soap operas, since psychologists demonstrated that soap operas didn’t raise the public from the level of an eighth grader.

Say, someone in a soap opera gives a flower to someone else. The latter says, “Ohhh, what a beautiful flower I received; now I will admire this flower, then I’ll put water in a vase, and I’ll put the flower in the vase.” In other words, actions in a soap opera are made primitive till the very end.

Ratings will work if there is truly a business market. Financial System Mediator’s ad, for example, can be seen in [the popular Armenian comedy show] Kargin Haghordum, but mainly watching this show aren’t businessmen having financial problems but, say, my female neighbor living on her pension who definitely wouldn’t go to the Financial System Mediator.

What do you consider to be the media industry’s biggest problem?

Once I fired a journalist because she hadn’t seen the film “We and Our Mountains” (1969). Perhaps what I did was arbitrary, but I see that the connection between the past and the present is completely severed. Young journalists have a terribly low level of intelligence; they don’t want to make an effort and learn something new. Interns come from the universities with a serious lack of knowledge. I say, kids, the university is robbing you: if I took your wallet from your pocket, you’d hit my hand, but the university has been robbing you for four years and you stay silent.

Our country is becoming impoverished also in terms of intellect, and this is clearly evident in TV programs that invite guests. A circle of semi-literate analysts and political experts has been created which is constantly on television. None of them are ready to admit that they made an inaccurate conclusion or expressed a wrong opinion. And it’s like this in every sector. There is a need for intellectual people who talk and discuss.