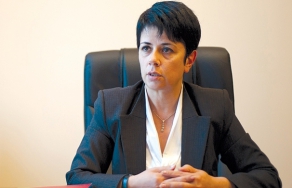 Apart from the achievements and challenges of the state agency she governs, Minister of Culture and Youth Affairs of the self-proclaimed Republic of Nagorno-Karabakh Narine Aghabalyan places importance also on the serious work of the news media. A former journalist herself, Aghabalyan believes in the need for news outlets to self-organize, evidence of which was the chaos of information received from Karabakh in recent months.

In information wars, strongholds built against misinformation are vital. In your opinion, are we protected?

Recent events have shown that no. I would very much like news media to assume more of a helping, supporter role and not be the instigator of panic.

It’s good to remember that a word used by accident or carelessly, or a slightly distorted word completely changes the picture and starts the spread of misinformation.

I see this issue in our news outlets — for the most part in news outlets of the Republic of Armenia. Recently, I myself encountered this problem. When I saw how news outlets reproduced my words, I was simply astonished. I know that I formulated a clear thought, but I read something completely different in the printed version.

The current situation pains me greatly. Of course, professionalism is important in all sectors, but in journalism it is most important.

Don’t you think, it’s not right in the current situation to put the blame on news outlets, since there is practically no news outlet that is funded independently? And clients are interested in not the quality of information but the targeted order.

But those same news outlets that are carrying out orders speak about the strengthening of statehood, the homeland, and lofty ideas with great pathos. They have to understand that the success of all those processes also depends on them.

Does the news media sector in Artsakh [Karabakh] please you?

Of course it doesn’t and cannot please me. But Artsakh news outlets (also its people in general) are distinguished by their self-restraint. That is to say, there are boundaries which no one crosses. A priority is the desire not to cause harm. And this no-harm factor is given greater importance than interests, ratings, and audience numbers.

Artsakh’s television airs completely local broadcasts and programs. There is an opportunity to watch also Armenian [from Armenia] and international TV programs. But in any case, there is an information gap in our reality, which our neighbors use [to their advantage].

Recognizing this gap, we, on one hand, spread misinformation, while our neighbors, on the other hand, engage in fraud. And it turns out that in the information arena, we’re in an unequal struggle. We have a front; we know, we see our enemy, who is implementing a targeted policy of misinformation and distortion, and instead of resisting and counteracting it, we ourselves spread wrong information and, as they say, we pour water into the opponent’s water wheel.

The information received from Artsakh during these summer months was quite contradictory.

The main reason for the panic that arose in Armenia and Artsakh in the months of July and August was inaccurate information. And it’s great that we didn’t lose our most precious attribute, the ability to self-organize, and we were able to quickly get out of this dangerous situation.

But for us, truly, it’s unacceptable to demonstrate such behavior for one day or even one hour. After all, one Azerbaijani appearing in Artsakh cannot create panic for an entire people, an entire state. And that in this case when, waging an unequal war, we have achieved brilliant victories against that same opponent.

The war that is taking place in the area of information likewise needs potential. Is there no goal to create an active news website in Artsakh and disseminate news first-hand?

I don’t think you’ll win in the field of information by creating one website. In this situation, when everyone can leave comments online and become a source of information for the majority (also for news outlets), it’s very difficult to resist with a single website.

In any case, you choose the news of the news outlet you trust and which is authoritative.

But [only] a small percentage of the audience thinks like this. Recent events testified to the fact that the determinant was not the conscious choice and serious orientation of information source but elemental, mass distribution.

I want to make a call for sobriety to our news outlets, since it turns out that we are leading ourselves on the path to self-destruction. We show that supposedly we address noble ideas and serve them, but it’s clearly evident that 60–70% (if not more) of those engaged in journalism today have nothing to do with journalism and don’t understand its function.

And in such a situation, it’s difficult to expect accurate, objective, and complete information.

We have always been able to self-organize during critical moments; probably the need for self-regulation in the information arena has matured now, since there’s the impression that we’ve reached the borderline.